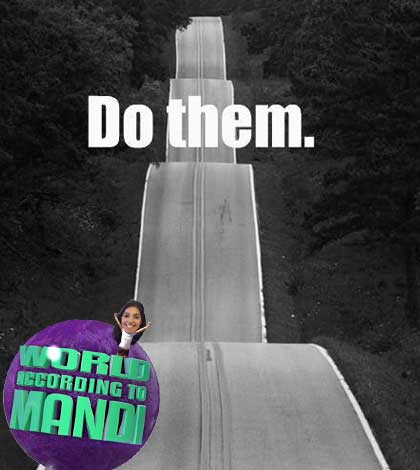 May is national run month! Lace up those colored sneakers, assemble your favorite music and rack up those miles. Woo! I know I’ll be running extra this month, with the weather warming up and summer on the way.  I’ve been on a health revolution and decided that this year I would work out as much as my body could handle.  I’d push myself to my edge and create a new edge! I’d run up those hills!

Inclines of any kind always seem so daunting, but why is that?  I’ll tell you! It’s our mental reaction to the incline, to the hill, not a lack of physical capability.  If we approach the hill at the same speed as every other part of the run, maybe even speed up, then they aren’t bad at all. They’re liberating! You just run it and keep running. Hot Damn! Slowing down only feeds your mental reaction and makes the hill harder.  What a concept?  Run up that hill at the same speed as the rest of the run and be free.

Last weekend I spent some time in Connecticut, and even though it was a leisure trip from my life in Los Angeles, I needed to get some good running in! It’s become a part of my routine. I run outside at least five times a week and I’ve been consistently adding in interval workouts with hills.  Love em! I’m well versed in inclines and hills, but oh boy, I always forget how challenging those massive rolling hills in the backwoods of Connecticut can be.  A quick steep jaunt up one hill, then down the backside and right back up again! Repeat and repeat some more. Those hills took a lot out of me, but damn did my efforts feel great.

While running those rolling hills I had quite the epiphany.  It was so much fun to run the rolling hills, so much so that I couldn’t shut up about it! I loved the challenge, loved that it was new and I realized how awesome it is to switch things up and run something different.  That’s what I need to do from now on! I’m going to find some rolling hills in Los Angeles.  Do we have those?  If not then I’ll head over to run the Santa Monica steps! That will most definitely satisfy my craving to no longer change my speed on the downhill versus the uphill!

Jump to today on my run where I put the theory that I’d avoided for so long to the test.  I didn’t slow down on those hills, I sped up! On the last leg of the run, which is all uphill, I felt stronger and faster than I had in a really long time. And upon finishing my run I checked my pace to find that I’d even ran faster than I had in way too long! Woo! I got a kick-start from running those rolling hills over the weekend. I’ll take it!

So remember, don’t slow down on the hill, don’t stop or you’ll regret it later, and remember to pick up your speed! You’ll feel better when you’re done with the hill and you’ll get an even better workout. Not to mention, if you use MapMyRun it will be great to look at that faster pace and time! So go out and run those hills people!