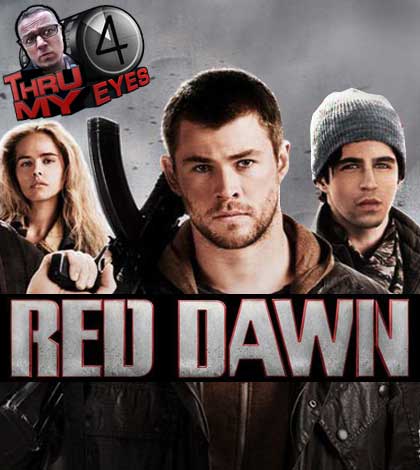 Who is meaner the Soviets in 1984 or the North Koreans in 2012?  I say the Germans in 1944 are the worst of them all.  The re-make of Red Dawn shows America’s youth fighting the North Koreans vice the Soviets in the original Red Dawn that came out in 1984.  The 2012 version of Red Dawn is directed by Dan Bradley and this is his very first film that he directed.  It stars Chris Hemsworth (Thor), so there is your eye candy ladies, Josh Hutcherson (Hunger Games), and Josh Peck (from the underrated Nickelodeon show “Drake and Josh”).  The cast of the original Red Dawn is much stronger.  You have Patrick Swayze, C. Thomas Howell, Charlie Sheen, Lea Thompson (she is HOT!!!!!) and Jennifer Grey (before the plastic surgery).  So if you had a cage match between the two casts, I would go for the Red Dawn cast of 1984.  I know the new cast has Thor on their side and he is a God but the original cast has Dalton.  And like Dalton said in Road House, “Be nice until it’s time to not be nice”.  So no debate.  Overall it was entertaining and it is always good to kick our enemies ass.  I believe the first Red Dawn will go down as the better version and this one will be forgotten before we bring in 2013.