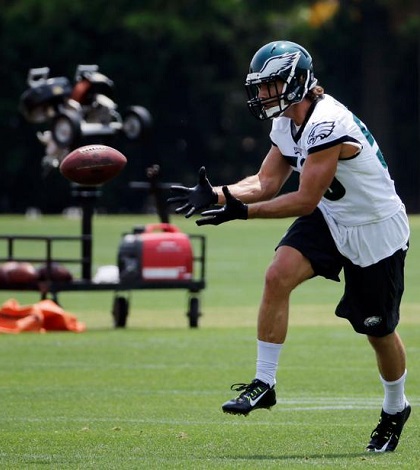 The Philadelphia Eagles’ roster will look glaringly different this upcoming season, with key positions such as quarterback, running back, and cornerback being filled by newly acquired players this offseason. Chip Kelly’s tenure as coach of the Eagles has been thus far defined by a large turnover of players and staff alike. Let’s take a look at the three biggest acquisitions the Eagles made this offseason, and what impact they look to have this year.

Murray comes to Philadelphia after leading the NFL in rushing yards last season for the Eagles’ division rival, the Dallas Cowboys. While the Eagles had a more than serviceable running back in LeSean McCoy, today’s NFL is defined by turnover. It’s a league where if you cannot live up to past performances, you’ll be out of town before you can plead your case. While many saw the Eagles’ move of trading McCoy to Buffalo as an insane one to make, the addition of Murray, arguably the league’s best pure runner, certainly softens the blow.

Chip Kelly and Eagles’ fans alike will be hoping that Murray’s success last season in Dallas was not just a product of the number one rated offensive line in the league. Can Murray perform regardless of who is paving the way for him? The Eagles offensive line was fourth-worst in the league last season and Murray will without a doubt be exploiting each and every seam that this year’s line can muster. If he can come anywhere close to the production he showed last year, 1,845 yards and 13 touchdowns on the ground to go with another 416 receiving yards, the Eagles’ will surely welcome their old rival to town with open arms and big expectations.

In 2014 the Philadelphia Eagles allowed the second most passing yards on defense in the entire NFL, with 4,238 yards against. The glaring weakness, and main reason the Eagles missed the playoffs last year, was the secondary. So why not nab a member of the best secondary in the NFL? Done and done.

That’s exactly what the Eagles did, signing a former member of the Seattle Seahawks’ renowned “Legion of Boom” to a six-year, $63 million contract. Swooping in and poaching from Seattle doesn’t automatically cure the ills of the Philly pass coverage, but all signs point to it helping tremendously. Maxwell has recorded 82 tackles and six interceptions over his four seasons (the last two as a starter). Maxwell’s 2014 campaign was his best, with 39 tackles, two picks, and 12 passes defended.

Maxwell joins an Eagles’ secondary desperate for a spark. He’ll surely be thrust into a position of leadership, with the top of the depth chart being rounded out with two newly drafted rookies, Eric Rowe and JaCorey Shepherd, as well as former New York Giants’ cornerback Walter Thurmond III. Maxwell will have to lead this group of corners if the Eagles want to be competitive in 2015, as Rowe and Shepherd have no NFL experience and Thurmond III is coming off a 2014 season in which he only played two games due to a torn pectoral muscle.

While it is tough quantify the true expectations for Bradford, the Eagles gave up a pretty penny to get him. In Chip Kelly’s search for who he believes to be the next franchise quarterback, Nick Foles was traded to St. Louis for the oft injured Bradford. While Bradford missed all of the 2014 season and the second half of the 2013 season with a torn left ACL, when he was on the field prior to those injuries, he showed great promise with great throwing accuracy and serviceable arm strength. The Eagles hope that he can bounce back from the torn ACL quickly and without a hitch. Plus the previously mentioned addition of DeMarco Murray will certainly take some of the load off of Bradford this season.

If Sam Bradford is able to perform even close to his breakout season in 2012, which saw him throw for 3,702 yards and 21 touchdowns to just 13 interceptions, then this Eagles team has a real chance at the postseason in 2015. Chip Kelly will surely be looking to utilize Bradford as much as he can, while closely monitoring his health throughout the season. With Bradford’s health being a constant question, the other quarterbacks on the Eagles’ roster will likely be called upon. Mark Sanchez, Matt Barkley, and Tim Tebow must be ready to excel during the 2015 campaign.

More Sports: New Faces of the New York Giants in 2015