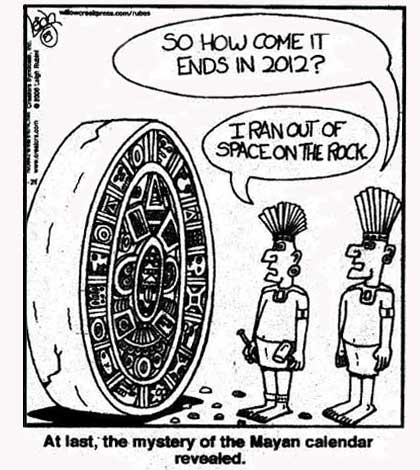 Oh no! The world might, quite possibly, could end on December 21st!

Did you hear the story about the world ending in 2012? That’s this year people!  Unless you live in an igloo or you’re a hermit, you’ve definitely heard this ‘rumor.’  I use the word ‘rumor’ because there are few ‘facts’ to support the story and our very own government called it such on their most recent blog post.  Who knew they even had a blog?  Not me!  Their post aims to push the weight of fear off our shoulders, proclaiming that “False rumors about the end of the world in 2012 have been commonplace on the Internet for some time.”  Thanks US government, for clearing that up.  The post in full can be read here! It seems to be aimed at children, children who enjoy reading the US government’s blog that is.

Settling fears for people is commendable, especially since a NASA rep shared that “at least a once a week [he gets] a message from a young person — as young as 11 — who says they are ill and/or contemplating suicide because of the coming doomsday.”  This was in an LA Times article, but hold up here.  Wait just a second people! By no means do I think the world will end on December 21st.  Just because an entertaining TV show tells you about it doesn’t make it true. But by chance the world does end, then we can’t do anything about it.  This is our journey and that’s that.  The world has ended, you’re dead, so no big deal.  Live and let live!

In order to dissect the potential end to our world and understand the so-called end of the Mayan calendar I delved deep into the abyss of the Internet.  I’ll paraphrase what I learned since my journey was a long and convoluted one.  No one really knows whether its true or not, whether the Mayan calendar is actually ending.  Scientists implore that no secret planet called Niribu is out there and about to strike us.  There are no known asteroids coming toward Earth.  And we will not, I repeat NOT be swallowed up by any known black holes.  Phew! Even modern day Mayans say that the world ending in 2012 is a western idea and not their own.  Mayans don’t even believe this? Then why do we? That’s just crazy!

So what we have learned today?  Is the world going to end this year?  The US government says it’s just a rumor, but children are deathly afraid.  Set your fears aside people and believe what the government blog tells you.  The Mayan tablets predicting the end of the world were probably misread.  I mean they’re super old and slightly illegible.  Awesome! The world won’t end and Christmas is saved!  We can head into 2013 and embrace a new era, one without a supposed end date.  Woo-hoo!