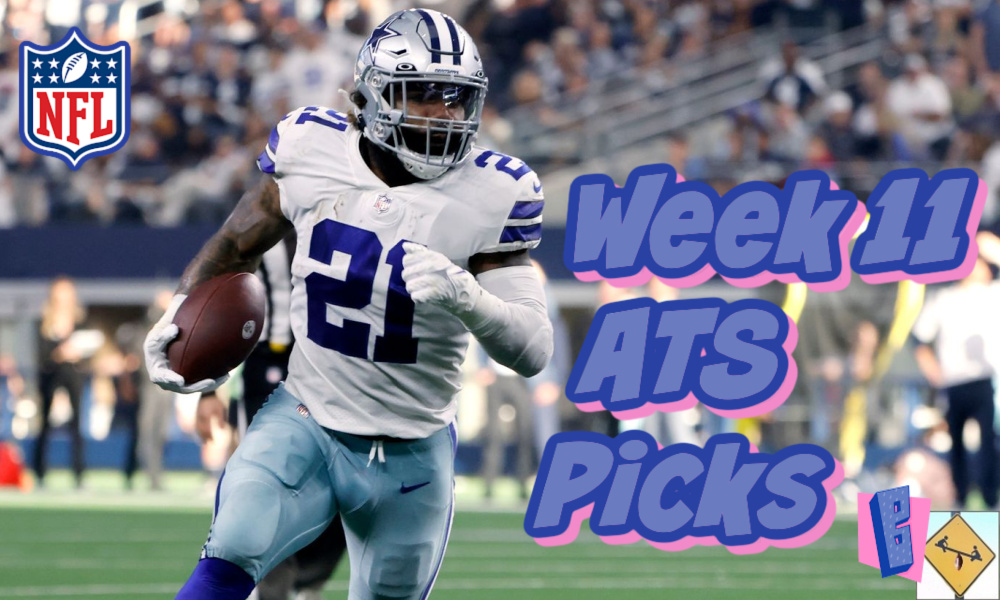 Erase last week from your memory and put your money behind legit winning teams. It’s all NFC in NFL Week 11. Your best picks against the spread.

A bad week for us mirrored what went on in the NFL at-large. Can you ever remember this many humongous blowouts in the same week? A whopping ten teams lost by double figures. Of those, six lost by more than three touchdowns! And not every blowout was a no-brainer. Miami and Carolina managed to win going away, as underdogs. Kansas City and New England did so in what were expected to be close contests.

The standings are as muddled as ever. Twelve AFC teams have at least five wins, while only one has more than six wins. Meanwhile, our beloved, locked-in, playoff quintet in the NFC seems to have dropped to at least a quartet. Tampa Bay is now just a game ahead in the South, with the entire division within two games.

Because of all the uncertainty, we are honing in on the sure things. It’s all NFC in NFL Week 11. Take the points or give them up, so long as its a team on a winning trajectory. Each week, Dan and Todd will select two games against the spread. NFL Week 11 is erasing the memory of last week and honing in on the playoffs. We are all NFC this week to round out your best picks against the spread.

For yet another week, I am targeting middling NFC competition for the NFC’s elite. Green Bay is one of the premiere teams in the conference, among the (now) quartet that has separated itself from the pack. These teams should not be laying less than a field goal against the rest of the conference. This line feels low despite the Packers just trouncing Seattle in Russell Wilson’s return.

Minnesota has had a number of impressive performances, including this past week. But consistency is what prevents it from being a playoff certainty. The Vikings have developed a habit of losing but covering as an underdog. Yet if you don’t think the underdog can win outright, it’s not a smart bet to cover. Minny is traveling a dangerous path, one I like betting against.

I thought this line may creep lower after Cleveland’s performance last week, but I am happy it has stayed. Detroit is not a good team, and this goes directly against what I just said about taking underdogs if you don’t think they can win outright. But can the Lions be the exception that proves the rule?

Detroit is still winless straight-up. However, they are 5-4 ATS. Digging deeper, when the Lions get more than 3.5 points, they are 5-1, the lone failed cover coming at Green Bay. That means, when this team is getting any sizable amount of points, they are losing but covering 83.3 percent of the time. The sample is small, but this is the definition of a team that can keep things close. I expect them to keep it close enough here too to bring that record to 6-1, even if their overall record falls to 0-9-1.

It feels obvious to simply pick the better football team in NFL Week 11, but Vegas is trying to trick us with these lines. Arizona is a really good team, so set aside the anomaly that was last week. The Cardinals were facing a really good defense in Carolina, plus the added “Cam is Back” mojo. That is not the case against Seattle.

What exactly can the Seahawks do well right now? Very little outside of staying in games. They are one of the worst teams in the entire league right now and you can put much of that on their poor defense. Even without Kyler Murray, the Cardinals will dominate Seattle. Give up less than a field goal and ride with the playoff team and likely NFC West champion.

Excuse me, but did the Chiefs suddenly learn how to play good defense? Did Patrick Mahomes suddenly stop making a ton of “rookie” mistakes? Neither happened in Kansas City’s win, but Dallas certainly proved a lot when it dismantled Atlanta. So what the heck is going on with this line?

The Cowboys are easily the better football team and will have no issue running all over the Chiefs’ defense. I even think Dallas’ defense can stop Kansas City. Vegas thinks these teams are basically even, which is far from true. It’s time to admit that the Cowboys are very good. Take the points and ride them to victory.