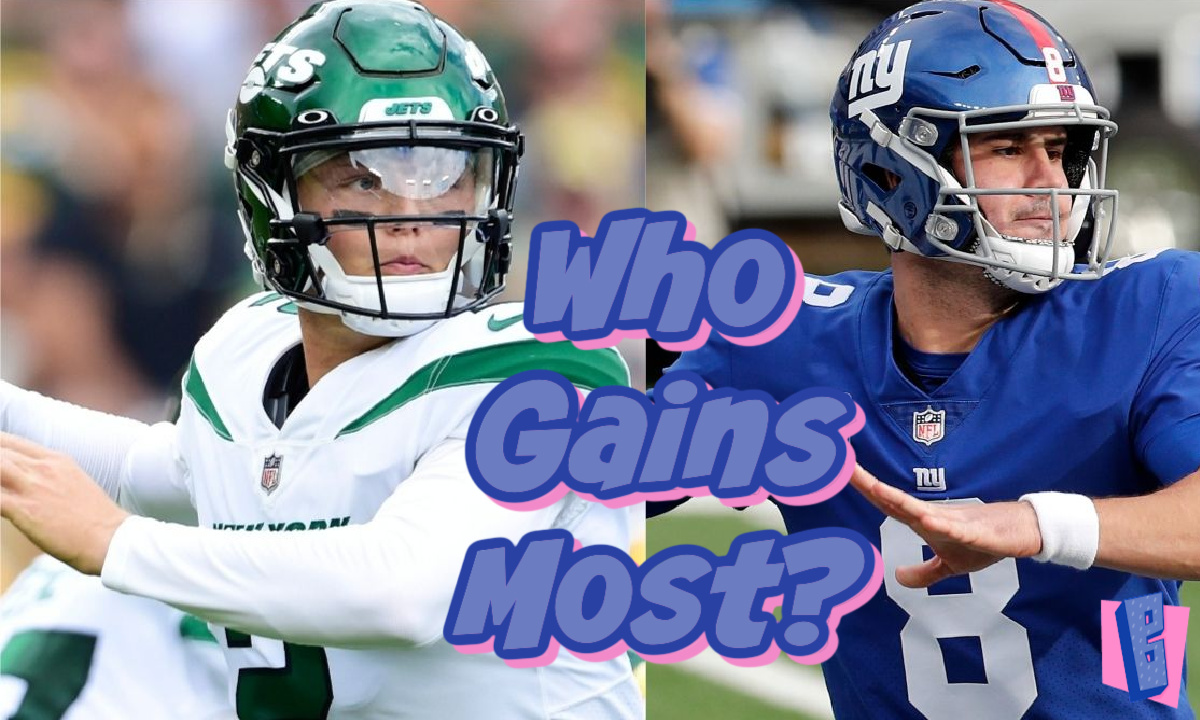 All five teams atop the NFL Draft 2022 can vault up the standings, but only one truly has the most to gain with their pick(s). Sorry not sorry Houston and Detroit, this debate comes down to the Jets, Giants and Jags.

The NFL doesn’t rest for long, if at all. Days after the Super Bowl champion was crowned, everyone needed to know power rankings for 2022-23. There is no rhyme or reason for it, other than an endless thirst for football content. Count us among the thirsty!

The NFL Draft 2022 is up next on the schedule. Outside of projecting, predicting, and pontificating where quarterbacks will land, the draft is the bee’s knees so to speak. The top five teams in the NFL Draft 2022 roll like this: (1) Jacksonville Jaguars, (2) Detroit Lions, (3) Houston Texans, (4) New York Jets, and (5) New York Giants. Which team has the most to gain and can legitimately make the playoffs?

More BuzzChomp: The Book of Boba Fett brought Total War in its Finale

The Giants actually have pick five and pick seven thanks to the Justin Fields trade with Chicago. There are other teams near the top in dire need of a franchise quarterback or, at least, a direction at the position. Unlike most years, it doesn’t seem like there is a player close enough to being a top-five prospect to reach for in the top five. In fact, there may not be any QB deserving of even a first-round grade. Obviously, a couple of these guys will be selected on day one, but how high? That leaves the top five in a rare condition. Teams will really be selecting who they think is the best player available. It seems obvious, but it doesn’t always happen that way.

The top 2022 prospects are some combination of linemen and defensive backs. It doesn’t mean someone from another position can’t sneak in, but it will be a “boring” top of the draft for those looking for skill players. There may not be a single skill player selected in the top 10, let alone the top five. This means a team’s current makeup will determine who gains most from their selection.

It may sound biased, but this all is shaping up to be the perfect confluence of events for the New York Giants. First, and most importantly, they have two high picks. Second, this new regime seems willing to give Daniel Jones a chance at quarterback with more consistency around him, meaning they won’t be forcing a quarterback selection. Third, New York has already invested heavily in offensive skill players. It is not an area they would look to fill in round one. The Giants’ main needs are offensive line and pass rushing, the two biggest strengths atop this draft class.

Also on BuzzChomp: House of Gucci is a Fabulous Film

Can the team come away with one of the best at both spots, solidifying two major weaknesses of the previous roster? It may not be “fun” to draft lineman-lineman with two top-seven selections, but it could be New York’s quickest way out of the doldrums. Tell me you see another franchise capable of turning their roster around with one of these early selections. The Jaguars and Jets have already planned their future at the QB position, but are the rosters really good enough for one new guy to make a huge difference? Major development from their two passers is more important than anyone that can be drafted in April. It fits the formula we just saw from Cincinnati, but will it truly happen again? My money is on the Giants.

The Jets and Jaguars are both in a near identical place to the Giants, because I don’t view Daniel Jones as any more established than Zach Wilson or Trevor Lawrence at this point. Wilson and Lawrence are trending up with high ceilings. Jones has established his ceiling and has to once again prove himself before we remove him from the plateau he has been stuck on. All three teams can “win” with their top picks by doing the exact same thing. All three won’t possibly succeed, as they are going after the same players, so where is the line drawn for future success? It’s the Jets who can gain most this season from their top pick.

Detroit and Houston need more than one offseason to rebound, especially with their quarterback situations so uncertain. Jacksonville and the Giants have new head coaches, meaning an adjustment period is inevitable. Does either team have “their guys” in place, or will this upcoming season prove to be a culling? Only the Jets are a full year into their rebuild with zero additional turnover to speak of. Dare I say they are poised to win the NFL Draft 2022 and gain most from their own top ten selections. We’ve seen time and again how a solid core boosts skill players. The Giants may have potentially great skill players, but the Jets are building a rock solid core.

Much like their top five peers, the Jets also need more help at pass rush and should further bolster their offensive line. More importantly, Joe Douglas has been a whiz in the trade department, meaning the Jets’ draft assets are likely to materialize into something special. What Douglas has whiffed on is signing free agents who can stay healthy. He has done well drafting talent, especially in the later rounds. His third NFL Draft will be the charm for the New York Jets. His core will be nearly complete, allowing the home grown skill players to flourish.

I hope it goes without saying that any talk of the playoffs, or gaining most from the draft, is predicated on improvement at quarterback. This is true of Wilson, Lawrence, Jones, and even Jared Goff in Detroit and TBD in Houston. Great quarterbacks can overcome deficiencies on the offensive line, but a very good offensive line makes every quarterback better. Fractions of a second are what determine open wide receivers, open holes for running backs, and clean throws from the quarterback. They are how defenses thwart the opposition, as opposed to giving up an extra few yards each play. It won’t be a sexy draft, but the top five is going to improve every team involved this season.