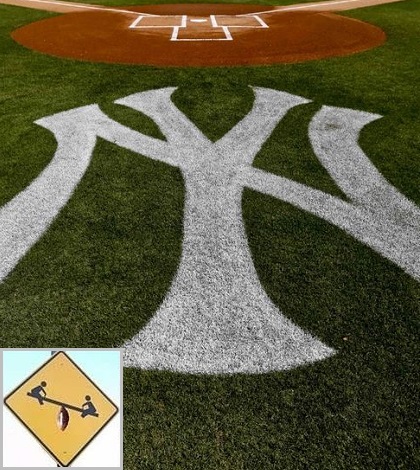 The New York Yankees are underdogs in a big way, as injuries and question marks fill their 2015 opening day lineup. Will they crash and burn or shock the baseball world by catching fire?

I have some good news and some bad news. The good news is the Major League Baseball season kicks off in just about a week! The bad news is the New York Yankees may crash and burn this season.

The folks over at Grantland picked New York to finish last in a tightly knit AL East. Meanwhile, the number-crunchers at Fangraphs determined that the Yankees have the least cost-effective lineup in baseball by A LOT. New York is paying over $6 million per win above replacement (WAR). The 29th-rated team is paying under $5 million per WAR.

These projections don’t mean all that much for the team’s success in 2015 other than the fact that it could be an uphill climb. We’ve already touched on this a bit in the past, but much of the Yankees’ success this season will be dependent on the health of their starting pitchers.

All of Masahiro Tanaka, Michael Pineda and CC Sabathia are giant injury risks. The possible fifth starter late in the year is either Ivan Nova or Chris Capuano, both of whom are already hurt now and expected to miss significant regular-season time. The only guy in the rotation left is newly acquired Nathan Eovaldi, he of the 15 career wins.

On the everyday player side, the team’s defense should be solid (assuming health), but the batting upside of this roster is nearly non-existent and that’s assuming health! Any number of the veteran hitters on this club can put together an okay, fine year if they remain healthy. No one is going to make the All-Star team though with the possible exception of Jacoby Ellsbury, and he’s already hurt!

The bullpen should be an area of strength, but I don’t know what else is. If a number of guys go down for long stretches of DL time, the team is screwed. Even if that doesn’t happen though…oh, who am I kidding. Of course that will happen!

Oh no, Grantland.com picked the Yankees to finish last in the AL East, and look who they picked in first. It’s the Red Sox, surprise, surprise. Cue the chants of ‘homerism’ as that website loves Boston. Their rankings mean little to me. As does the cost effectiveness of the team’s roster. New York has overpaid for its players for a decade now. It overpaid in 2009 when it last won the World Series and it overpaid the last two years when it missed the playoffs. This is not news.

The one truly concerning fact about the 2015 New York Yankees are their current crop of injuries heading into the season. All teams have players get injured, but starting a new season with a lengthy DL list spells bad news. Perhaps they are getting them all out of the way at once, or perhaps several of these injuries linger well into the regular season. I lean towards optimism, especially when it comes to the pitching staff.

New York was a poor baseball team last season. On the offensive front, their highest ranking was 17th in slugging percentage. The team ranked 20th or below in all other major offensive categories. As for pitching, New York also ranked poorly. Ninth in WHIP is excellent, but ranking 16th or lower in everything else, including 21st in quality starts, stinks of bad baseball.

Despite all of that, including a staggering -31 run differential, the Yankees finished second in the AL East in 2014, six games above .500 and in the playoff hunt. It’s hard to imagine the 2015 Yankees being worse. They won’t be.

Brett Gardner is the name to watch on this year’s Yankees. He will make the All-star team, continuing his rise from contributing player to lynchpin hitter. He is becoming the new Yankee Captain. I also see Ellsbury excelling, his early spring training injury aside. No one else will scare opposing teams in this lineup, unless A-rod shocks the world, but this is a good thing. The current MLB landscape loves small ball, something New York was never known for. They trended that way in 2014 and I expect more of it this year. Lots of low scoring games won on the base paths.

As I noted, the injuries must be followed carefully, especially to the pitching staff. But Tanaka will not be a one and done player. He was outstanding in 2014, notching thirteen wins. Pineda is a complete question mark, as is CC Sabathia. But both players have demonstrated an ability to succeed at a high level in this league. Sabathia won fourteen games in his last full season.

The 2015 New York Yankees are underdogs, in their division and in the league as a whole. The crash and burn potential seems higher than ever, but so does the jump and catch fire potential. These are the Yankees and I don’t see a third straight year out of the playoffs in their future.

More baseball: How to win your Fantasy League