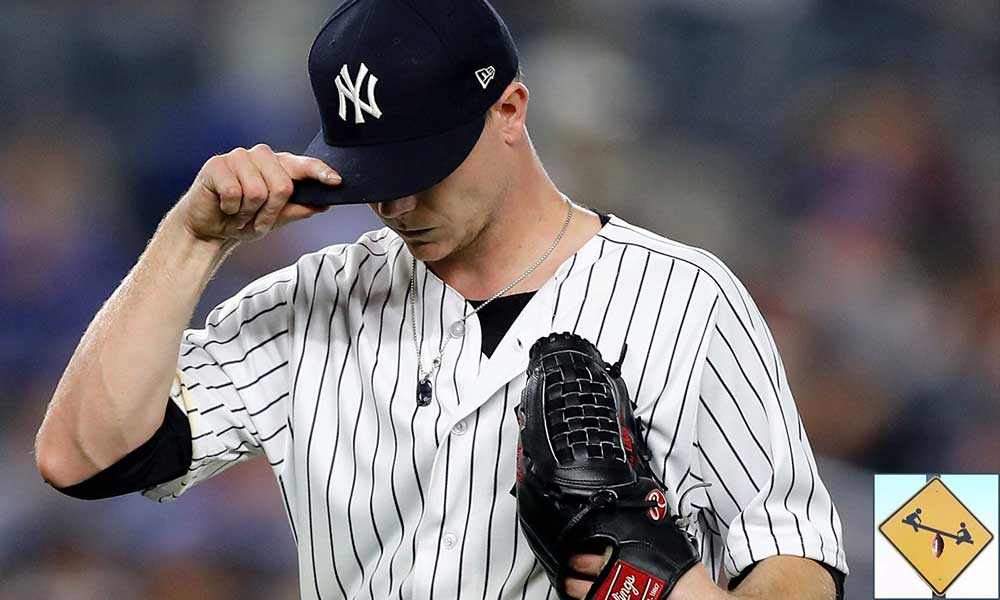 It’s a tight race for first place in the AL East, meaning one player can make a huge difference for the New York Yankees. They need/want to add a starting pitcher, but who is worth giving up in return as the 2018 trade deadline approaches?

As the New York Yankees enter July, they hold one of the best records in the entire league. The problem is the Boston Red Sox also hold a premiere record in baseball. It appears as though the race for the AL East title will last all season, and even if these teams finish 1-2 in the league, one will be relegated to the wildcard play-in game in the postseason.

That would be a dramatic and crushing outcome for a potential 100-win ball club. Facing James Paxton or Jose Berrios or perhaps even Shohei Ohtani in a winner-take-all scenario is not ideal regardless of how good a team was over 162 games.

To avoid this situation and surpass Boston, New York must shore up its starting rotation. The Yankees already have one of the best bullpens in the sport and an offense so endlessly deep that good ML players are stuck in Triple-A. But the rotation has holes.

Sonny Gray has been bad. With Jordan Montgomery and Masahiro Tanaka on the disabled list (Montgomery for the rest of the year), the Yankees have had to turn to rookie spot starters. These guys have performed exceedingly well to date, but it is unlikely to last for three more months. First of all, opponents will get more detailed scouting reports on the likes of Jonathan Loaisiga. Second, guys like him and Domingo German will have to take time off to avoid throwing too many innings in their first taste of the bigs.

There are other arms in the system who will be given spot starts, but no one appears like a three-month answer at this point, which is why the New York Yankees are front and center in any trade discussion.

The non-waiver trade deadline isn’t for another month, but New York has surely been poking around. What level of player should New York be looking for, and how much future talent should it be willing to part with? This 2018 club certainly has a chance to win the World Series, which is the ultimate goal of any season. That shouldn’t be wasted. But you also don’t want to deal away too many future players, especially if you fall short of the championship.

The Chicago Cubs pulled the ultimate trade success when they dealt for Aroldis Chapman prior to winning the 2016 World Series. But in that deal, they gave Gleyber Torres to the Yankees, the man who is likely to win the Rookie of the Year this season. Imagine if Chicago had fallen short of the ring and still dealt away Torres in the process. That would have been hard to stomach.

That is the scenario facing the New York Yankees: what do they want to add versus what are they willing to part with.

ALSO ON BUZZCHOMP: Time to Pick the NBA and NHL Season Awards

Elite arms are questionably available around the league. Maybe Jacob deGrom is available but not if you ask the Mets. Maybe a healthy Chris Archer could be had. Cole Hamels is on the block but no longer elite. My preference would be for New York to trade for J.A. Happ, but who knows if the Blue Jays would try to charge a surplus for trading within the division.

Assuming Toronto would deal with the Yankees, Happ is the perfect get. He is secretly great but won’t cost as much to acquire because he is a pending free agent, on the wrong side of 30, and has never really been this great of a pitcher before the past few seasons. But I would be willing to go even higher than Happ-level if the returning player was a relatively young, cost-controlled starter. It’s just a matter of finding a match.

For an expiring deal like Happ’s, no way should the New York Yankees part with an elite prospect. In other words, no way would I want New York to pull a Chapman-type deal in reverse. The chances of reaching its ultimate goal in one defined season are simply too low. But management should have a longer look than that. Grabbing an arm under contract is more beneficial than any prospect would be. He can help compete this season, as well as years to come.

The New York Yankees need one more reliable arm for their starting rotation. Nearly every pitcher currently in pinstripes has pitched well this season, or at least well in spurts. But fatigue and injuries will require depth to overcome, and the Yankees are lacking. One pitcher can make the difference between falling short of the championship and winning it as Houston did last year by adding Justin Verlander.

The Astros added Verlander at the trade deadline and he arrived under contract. Not only did he help them win the World Series in 2017, but he is paying huge dividends for Houston this season. Are there any comparable options for New York in 2018? Happ would be a rental, all be it a valuable one. His price is low/lower compared to the value he brings to a rotation. I’m hesitant to recommend New York pay higher for another player like Archer or Hamels, because neither player is getting it done for their current team. Plus, the Yankees added Gray last season with a Verlander-esque deal and I’m not ready to write him off.

Gray has the talent to turn 2018 into a solid season for himself, even if he’s struggled thus far in the Yankees’ rotation. Boone is doing an excellent job managing his young pitchers as well. It appears that the calling up and down of arms has been successful, rather than keeping any one player on the big league roster. This leaves me to flip the tape on a potential trade for New York. Who should the Yankees be willing to give up?

There are a litany of untouchable players on the New York Yankees, including several in the minors. With Gary Sanchez hitting the disabled list, the team’s depth will be tested. They can’t afford to shop one of their solid bats, because Austin Romine does not illicit fear in opposing pitchers. It’s also critical to have a backup catcher. Who will that be exactly, while Sanchez is out? Tyler Austin and Neil Walker are probably available if the return is sweet enough. Ronald Torreyes might be as well. Would the Yankees include Clint Frazier in a deal? He’s ready to be an everyday MLB player, yet New York has no room for him on the big league roster. They could get an ace for Frazier, but I’m 50/50 on if the Yankees are better off keeping him.


New York appears good enough to win the World Series already, so giving up top-tier talent seems foolish. The best case scenario is for New York to eat a high-priced contract for another team and acquire a pitcher for less player capital. This might ruin the luxury tax goals that the Yankees had, as they did get below the tax line. But they can afford the money. They can’t afford to leverage a dynasty against a single season’s success.