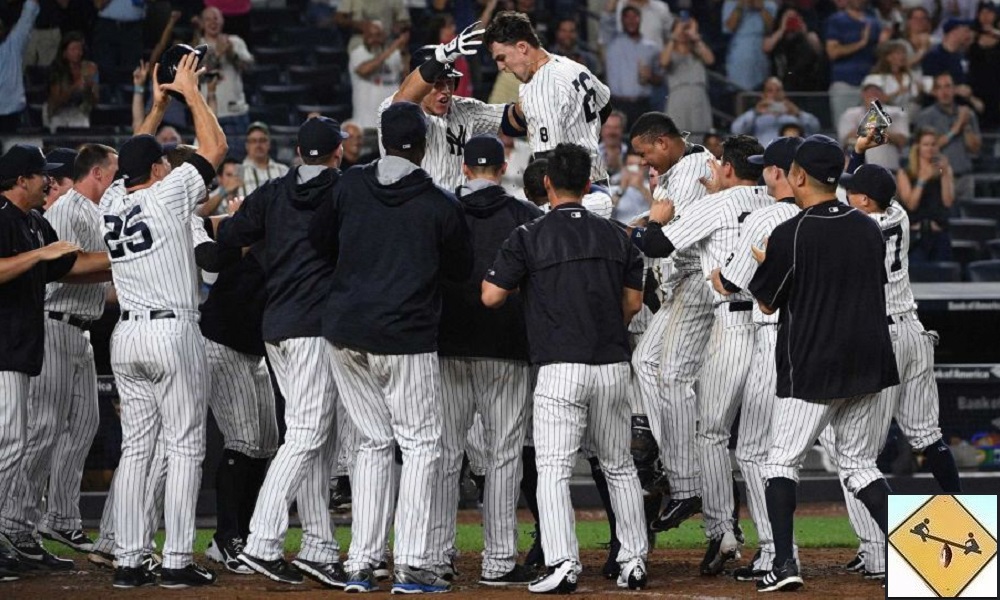 At ten games over .500 the New York Yankees can smell the MLB Postseason. But is it too little too late? We break down their legit playoff chances.

I know the 2016 NFL season just started, but the biggest news this time of year is still in the world of baseball. And we have quite a race to the postseason in the American League brewing. As of September 12th, the Boston Red Sox lead the AL East with 62 losses. Toronto and Baltimore are tied at 64 losses, two behind the division lead and in possession of both wildcard spots.

Trailing right behind that group are the New York Yankees at 66 losses, as well as a slew of other clubs: the Tigers, Royals, Astros and Mariners are all within four games of both wildcard spots in the AL. Seven teams for two spots. Or, if you include Boston, eight teams for three spots with just a couple of weeks remaining in the regular season.

Of all the teams in competition here, arguably the most surprising is New York. The Yankees were drastic sellers at the trade deadline and brought up a number of their intriguing young hitters for the stretch run just to get them some at-bats in the big leagues. Battling for a playoff spot was an afterthought once the big names went to other teams.

But those big names weren’t necessarily big pieces. Carlos Beltran was the team’s best hitter, but he was just one hitter in a nine-man lineup, and he was a negative in the field. Aroldis Chapman and Andrew Miller were two of the best relievers in baseball (and still are), but the Yankees still have a serviceable bullpen even after their departures. They traded from an area of strength meaning what was left was still workable.

The starting pitching wasn’t affected (outside of Ivan Nova being dealt and now being unhittable in the NL, because of course he is). And the young hitters were given free rein to unleash whatever they had. Gary Sanchez has unleashed enough hits to be a multiple Player of the Week award winner and challenge for Rookie of the Year in the AL despite playing so little. Tyler Austin and Aaron Judge have cooled but have also had a number of big hits. The emergence of the young hitters has also taken pressure off of the veterans. Starlin Castro had a great August. Gardner, Ellsbury and McCann have had hot Septembers thus far.

It is all coming together, but is it too little too late? There are so many teams in the mix that even a scalding stretch for NY in which it won seven straight games hardly moved the needle other than bringing the likes of Toronto back to the pack.

Fangraphs still gives the Yankees just a 13.5 percent chance of making the postseason. That figure is fourth of the seven wildcard contenders, well behind all of Toronto, Baltimore and Detroit. Part of the reason for the low odds is that New York’s remaining schedule is almost entirely made up of games against those other AL East contenders. After a series against the Dodgers (another playoff team), NY plays series against Boston, Toronto, Boston again, and Baltimore. If it makes the playoffs, it will certainly have earned it.

The Yankees didn’t just win seven straight games before losing on Sunday, they won games against the very best in the American League, Tampa Bay not included. New York is ten games over .500 and in full control of its destiny. Yankees fans could not ask for a better end to the season and baseball fans should be foaming at the mouth to see what happens. The Bronx Bombers control their playoff destiny. Let that sink in.

After muddling around .500 for most of the season, New York finally found a spark and a winning streak or two. The Yankees consistently played the best teams in the league really close all year, so it’s no surprise they are now among the contenders. What is surprising is that the fire has come at the most opportune time of year. If you recall, New York made a short run right after the All-star break, calling into question the impending fire sale at the trade deadline. But thankfully the team reminded everyone who they still were, made a bunch of trades, and became a team no one thought would ever be this hot.

Can the Yankees make the playoffs? Yes, they most certainly can. How do they matchup against the five teams remaining on their schedule, four of which are AL East rivals? Let’s take a look.

Tampa Bay Rays: 9-7 record and 2-4 on the road
Three games on the road

Toronto Blue Jays: 6-9 record and 1-5 on the road
Four games on the road

Baltimore Orioles: 8-8 record and 5-2 at home
Three games at home

A quick glance at the records thus far favors New York’s opponents, but they are ahead in the standings so that’s not surprising. If we are to assume that the Yankees are still a .500 team on the year and ultimately end with .500 records against their AL East opponents, then New York is in for some serious winning down the stretch.

New York takes two of three from the Dodgers since they are at home. The Yankees get four of seven from Boston, all three from Tampa Bay to bring their road record to .500 versus the Rays, three of four from Toronto and two of three from Baltimore. That’s a 14-6 record down the stretch for New York, favoring the Yankees a bit, since they are the hot team with the hottest of bats right now. That puts them at 90 wins on the year, something that seemed unthinkable up until early August.

I believe New York reaches 90 wins and that should earn them a playoff spot. But it might not. The leagues are top-heavy this season, especially the American League. Multiple teams will finish with 90 or more wins so strap yourself in, because September baseball is getting insane.