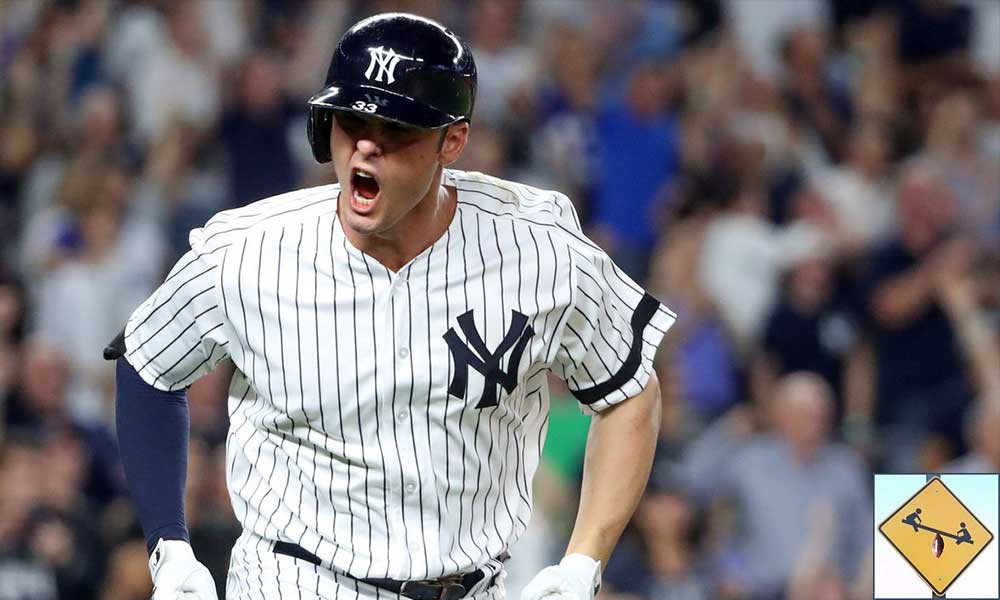 Greg Bird has rejoined the New York Yankees, meaning a deserving player is headed down to AAA. Ronald Torreyes is the first, but the team must utilize a constant rotation to get their stars the MLB experience they need.

Here’s a fun game to play. Try to determine who SHOULD be taken out of the New York Yankees starting lineup now that Greg Bird has come off the disabled list. The team chose to send Ronald Torreyes down to AAA upon Bird’s return on May 26th, but rumors were initially that Tyler Austin would be sent down. Is a constant rotation imminent?

We have a few lineup spots that are held down pat. Aaron Judge, Giancarlo Stanton, and Aaron Hicks take up three positions between the outfield and designated hitter. Hicks has developed into a very solid hitter and has always been an exceptional defender, especially since no one else is really fit for center field.

Gary Sanchez and Didi Gregorius are entrenched at catcher and shortstop respectively. To the surprise of some, Gleyber Torres is also already fully entrenched at second base. He is not going anywhere, he will not rotate or split time with anyone else, and he is making 2018 one of the greatest Rookie of the Year battles in our lifetimes. I’ll get to that in a moment.

There are three spots in the New York Yankees lineup that remain up for grabs: left field/DH, third base, and first base. Everything else is spoken for. The “problem” is that there are about seven legitimate guys for those three spots, and that’s not even including current MLB bench player Ronald Torreyes who was the first to go down to AAA with Bird’s return.

The seven contenders vacillate between veterans, experienced players with upside, and prospects with the sky as the limit. They are Brett Gardner, Neil Walker, Miguel Andujar, Brandon Drury, Clint Frazier, Tyler Austin, and the aforementioned Bird.

This roster logjam is so crazy that someone hitting the heck out of the ball is not only going to fail to start, but they will be forced to play in the minors. Drury is already wallowing in the minors; as is Frazier after the briefest of call-ups last week. Bird supplies much-needed left-handed power to the middle of the order. It seems like he should certainly move back into the lineup, at least against right-handed pitching.

It would then be logical to hang onto Austin to bat against lefties and play first base. He tears apart lefties, currently sporting a .996 OPS against them. Rumors indicate this will not be the case, but that doesn’t mean it shouldn’t be! So then who actually should get sent to the minors to clear a spot for Bird and keep Austin?

It can’t be Walker. He doesn’t have minor-league options. Walker plays every infield position besides short. He also has been torrid for the entire month of May to the tune of a .979 OPS. It can’t be Gardner. He is the wise and experienced batter on this team. The Yankees aren’t going to remove him from the clubhouse for the sake of a rookie.

If you’re doing the math, along with Frazier and Drury, that means Andujar gets sent down. Except that he wasn’t. If not for Torres putting up MVP splits, could you imagine a rookie coming up and being better than Andujar? That’s likely why he remains on the MLB team and Torreyes is in AAA. Andujar has power, finesse, contact skills, and confidence at the plate. His lone shortcoming is not walking. It’s crazy, but Aaron Boone may be forced to consistently revisit this decision, because everyone is performing well at the big league level..

The New York Yankees have a great problem and one they likely only dreamed of actually having this season. Boone had no idea he would be making such difficult decisions with the lineup. Thankfully, there truly is no bad decision in this instance. Every player competing for the three ‘open’ spots in New York’s lineup would be starting for almost any other MLB team. Since they are all THAT good right now, one can easily see a trade happening in July that acquires the Yankees some pitching. The question remains, who stays in New York’s lineup?

The team chose to option Torreyes to AAA and make room for Bird, but this won’t likely be a permanent or longterm decision. I foresee the Yankees calling him back up within a week or two and optioning someone like Andujar down for a spell. Then perhaps it will be Austin’s turn for a week. This type of swapping could prove detrimental, but if Boone lets his team know the plan then it also ensures all of New York’s players get MLB experience and are ready in case of injury down the stretch. If the Yankees truly want to develop all of their star talent at the major league level, and the players have proven they deserve to be playing on the big league team, then they will need to be constantly swapping players between AAA all season.

A constant rotation by the New York Yankees is interesting, but Torres is even more so right now. He and Shohei Ohtani cannot both win AL ROY. They may both win league MVPs in the future, but one must vanquish the other this season. As of May 25, Torres has been worth 1.6 WAR in barely 100 plate appearances. Extrapolate that over a full season, and he is worth roughly 8 wins and is an MVP candidate right away despite batting out of the ninth spot. Last year, only two hitters in all of baseball topped 8 wins, and they finished first and second in the AL in the actual MVP vote.

Obviously Torres may slow down. He also may continue these exploits, be moved up in the order, and have an even larger impact. As for Ohtani, the pitcher/DH is on an even better pace than that.

Despite getting an earlier jump on the year than Torres, because of Ohtani’s schedule, the two players have nearly identical plate appearances and at-bat totals. We must remember, though, that Ohtani gains zero value from defense. Even still, he has been worth 1.0 WAR as a hitter. But Ohtani has also thrown 40.1 innings of premiere starting pitching, and has been worth 0.9 WAR on the mound. Who knows how his schedule will continue as the season progresses. The Angels have already begun pushing back starts of his to conserve energy. The team may also be forced to put him in more games because he is its second-best player. Either way, it should be a fun race all summer.