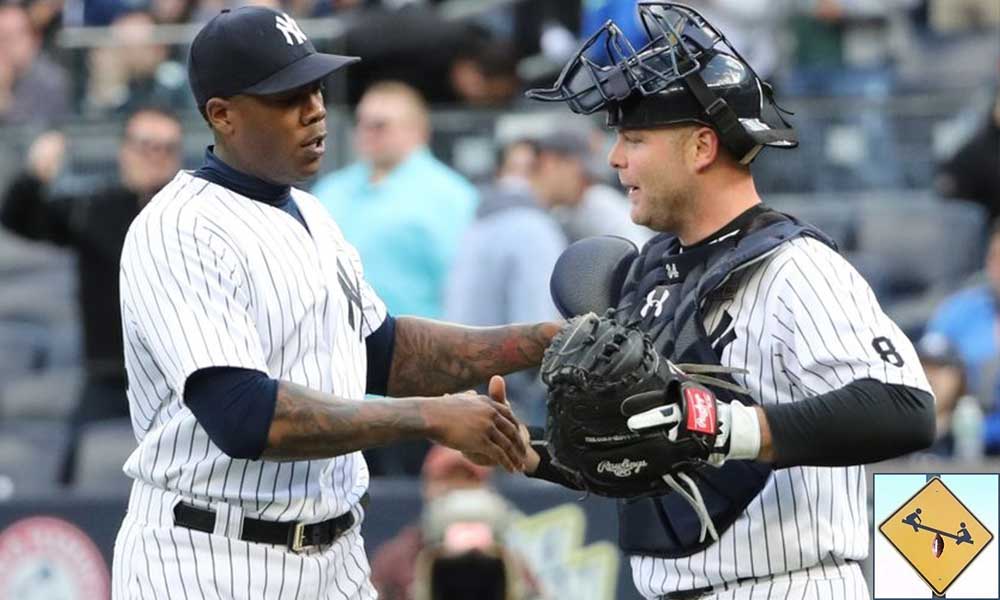 The New York Yankees turned a corner, but the team must sell high on its best players. The writing is on the wall and getting the most out of this season means saying goodbye to a few key stars.

The New York Yankees have been hovering around .500 for a week or so now. They currently sit bunched at the bottom of the AL East with a record of 24-25, a handful of games behind the division-leading Boston Red Sox.

It’s not quite June yet on the calendar, so New York would still have time to make up that ground, even though it has a number of teams to hop. The real issue is the roster doesn’t seem fit to play that well, even though there is time left to do so.

With that, there have been trade rumblings and rumors going around about the Yankees this final week of May. Some of the chatter was pure speculation about what the team should do. I suspect other was legitimate whispers about who could be moved and would be on the block if NY decided to reload some of its pieces.

ALSO ON BUZZCHOMP: NBA Playoffs Defined by Blowouts and Defense

The main names that come up in trade talk are Carlos Beltran, Andrew Miller and Aroldis Chapman. These names all make sense. They are playing exceedingly well at the moment yet are probably not in the long-term future of the Yankees. Beltran is certainly too old to have a long-term future with anyone; Miller is a movable piece at the strength of the team; and Chapman is in the final year of his contract before free agency.

The Yankees would likely be looking for starting pitching in any deal. They could also use some young bats. Obviously if the proposed return is great enough any player could or should be dealt. But what do you think of the overarching idea of moving some of these key pieces for 2016? Breaking up the bullpen would essentially be conceding the season. Trading a bat like Beltran would not be the same, but it would lessen an already under-performing offense.

I’m not quite sure what has happened with the starting pitching thus far this season, but I’m not ready to give up on the unit that was supposed to be a strength of the team. CC Sabathia has been great recently, as has Masahiro Tanaka. Really, the issues come down to Luis Severino and Michael Pineda, both of whom have been atrocious. If you trade away, say, Miller, there is a zero percent chance you would get back a SP the caliber of either of those arms. The Yankees essentially already have the young upside pieces they would acquire in a deal; they just aren’t performing well.

That’s not to say I’m against moving anyone. I understand the point of making such trades. I wouldn’t mind if the team dealt both of Beltran and Chapman assuming the haul was satisfactory. The organization has seemingly been in a holding pattern waiting for a few albatross contracts to come off the books this offseason and next, but a rebuild can begin from lower levels on the fly, and it will likely make the transition smoother than what has been happening.

You completely blew by the other pitcher doing quite well in a Yankees’ uniform this season, Nathan Eovaldi. He leads the team with nine wins as a starter. I’d also like to point out that Pineda leads the team in strikeouts and has gotten so little run support that it’s really hurt his record as a starter. Severino was the real weak link before he hit the DL and it was Ivan Nova’s entrance into the rotation that pretty much sparked New York’s turnaround.

The Yankees are 7-3 in their last ten games, better than even the Red Sox in that span. Granted, New York has been playing weaker ball clubs, but it’s no less impressive after the team fell so far under .500 in early May. This makes the subject of the trading block so complicated for me as a fan. As a front office executive the decision is easy. Sell high on every older piece on the roster.

The 2016 Yankees are not as good as the best teams in baseball. New York is not likely to improve enough to be on the same level as the Red Sox, Rangers or Cubs on a nightly basis. Therefore you sell high while you still can. If another team wants to rent Beltran’s hot bat for the remainder of the season, then you MUST deal him away. His value has never been higher. I’d also trade away Miller or Chapman, but not both. Having three incredible arms in the bullpen is wonderful, but swapping one for a lynch pin in the lineup or rotation is a no-brainer. You still have two dominating arms in the pen for the future. Both Miller and Chapman would warrant a hefty price tag, so I’d be shocked if the Yankees don’t deal one by the end of July.

As a fan this entire proposition sucks. The season is still young and the Yankees have truly turned a corner. New York could become a buyer instead of a seller and pick up a hot bat or two and keep on winning. They have the finances to buy better hitting. They already have the pitching in the rotation and the pen. Run support would truly make the difference. But the age of this team scares me. Can they actually play at a high level through the months of September and October? If the Yankees win a wildcard spot, will they be able to make any real noise in the postseason?

I know the answers to those questions. New York must look towards the future and make the team better for 2017 and beyond. While the last few weeks have been fun and the Yankees closed the gap in the division and wildcard race, I see no evidence of the other top AL teams slowing down. I see no evidence that if the Yankees make up the five games they need to get a wildcard berth, that they won’t be shut down by pitching once again in the playoffs.

This Yankees team is hungry and playing well, but they haven’t found their spark. They don’t feel like they have that winning edge of other championship clubs in years past. Sell high and keep getting better. But don’t decimate the team. Its starting to come together and killing that chemistry would be a major mistake.

More Sports: No Expectations for Victor Cruz on the Giants