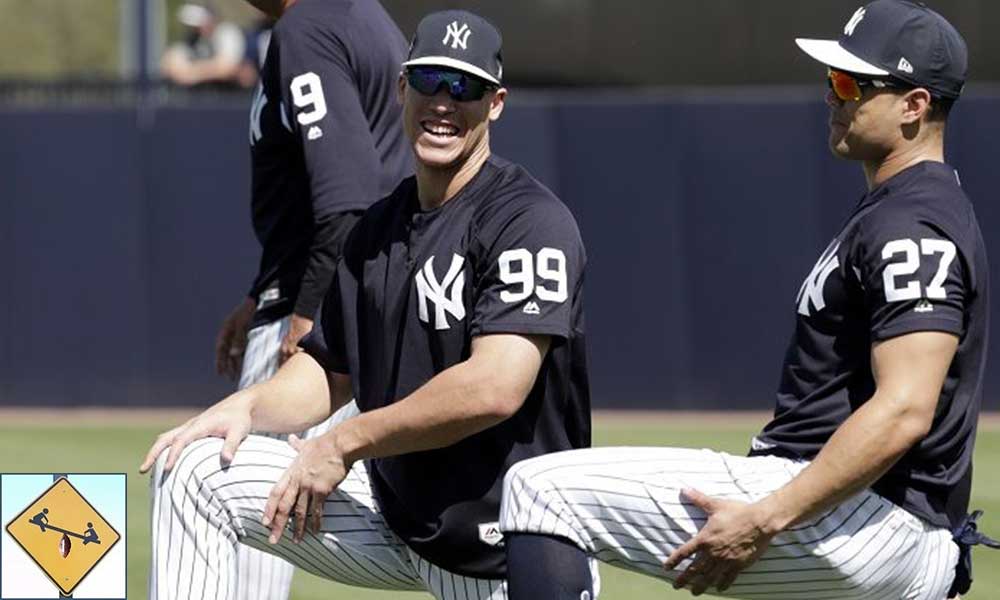 The start to a new MLB season is often volatile and the New York Yankees are not immune. Despite some major concerns, the team has kept panic at bay… for now.

How are you feeling about the New York Yankees start to the season? As of April 7, they are 4-4. They split the opening four-game series of the season against Toronto and defeated Tampa in the next series. New York is currently in the midst of another four-game set, this time against Baltimore. That is a perfectly fine beginning, but the weird thing is how the Yankees have been winning…and losing.

Coming into the year, this squad was supposed to mash and pitch lights out from the bullpen. It was a discussion as to whether the New York power and bullpen would be two of the best units in the entire league. On the other hand, questions remained about the starting pitching, and how often it could get to that peerless pen. Through two-plus series, none of that has added up. The Yankees are currently running out one of the worst pens in MLB.

Jonathan Holder, the final man in the pen, has been really poor. This led to the inevitable, he was sent down to Triple-A. The scary part is that the best arms are getting knocked around too. David Robertson, Dellin Betances, Tommy Kahnle, and Chad Green have all already allowed multiple runs in four or fewer innings pitched. As a group, as of Friday, the Yankees relievers have given up 16 earned runs in 21.2 innings.

That is as bad a start as a group can have, especially with how good this unit is supposed to be playing. The weird part is, the starting rotation has been pretty great! Already one full time through the rotation, everyone has pitched well, though we aren’t getting great length to this point. And on offense, though batting averages are low, people are mashing to the tune of 12 home runs and the seventh-best slugging percentage in baseball in the early going.

The literal numbers don’t really matter at this point; we are just concerned with trends. The offense feels fine. It has overcome a multitude of injuries, showing off quality organizational depth that hasn’t even breached the top prospects. (Though Miguel Andujar is up, he has yet to record a hit in seven at-bats.) Two more Yankees hit the disabled list today: CC Sabathia and Brandon Drury. We are going to encounter some bumps from the starters, but having five reliable arms is hard to beat. The bullpen has simply been so weird to see.

It’s still cold outside, and this is too small of a sample to be concerned about any one player. The concern stems from the entire unit blowing up. Is it something to do with new manager Aaron Boone’s handling? If it is, I can’t put my finger on the errors. If it was something to do with the pitching conditions in general, surely it would be affecting the starters too, which it hasn’t. I suppose having arguably the best part of your team struggle early and still bank four wins is a great thing. Once the pen turns it around, nothing will stop this squad.

I’m not worried about the New York Yankees thus far, but the pile of injuries are certainly concerning. As long as New York keeps itself afloat and over .500 during this stretch of injuries, they should be just fine when Sabathia and the like finally return. The outfield depth is being tested, but that will prove valuable later in the year as well. There is also one final blessing in disguise from the aforementioned bullpen inefficiency.

I don’t put the pen’s struggles on Boone. He is not throwing the pitches, simply placing the players. That simple task was one of Joe Girardi’s greatest strengths as a manager, so its little surprise if his predecessor is not as good at it. At least not yet. But it’s not why the unit as a whole is struggling. I will chalk that up to early season rust until May, because April baseball is rather unpredictable. Plus, finding a diamond in the rough for bullpen duties seems to happen for every team, every season. It’s the starting pitching that is hard to replace, not bullpen arms.

Because the Yankees’ starters are performing well out of the gate, we as fans can feel confident in our team. Because the batting is up to expectations, fans can feel good about this opening stretch of baseball. My level of concern is 5.5 out of 10, with 10 being crazy concerned and about to scream. There are issues to work out and the amount of injuries are scary, but it’s very early and our team has not lost a series yet.

Go ahead, call me a bad New Yorker because I’m not overreacting. Or just ask me again on May 1st, because that is the true turning point. I’ll be hitting the panic button if these issues are still around next month, but for now the New York Yankees are finding a groove along with their rookie manager. It’s hard to watch your team’s strength struggle, but its a better problem than most.