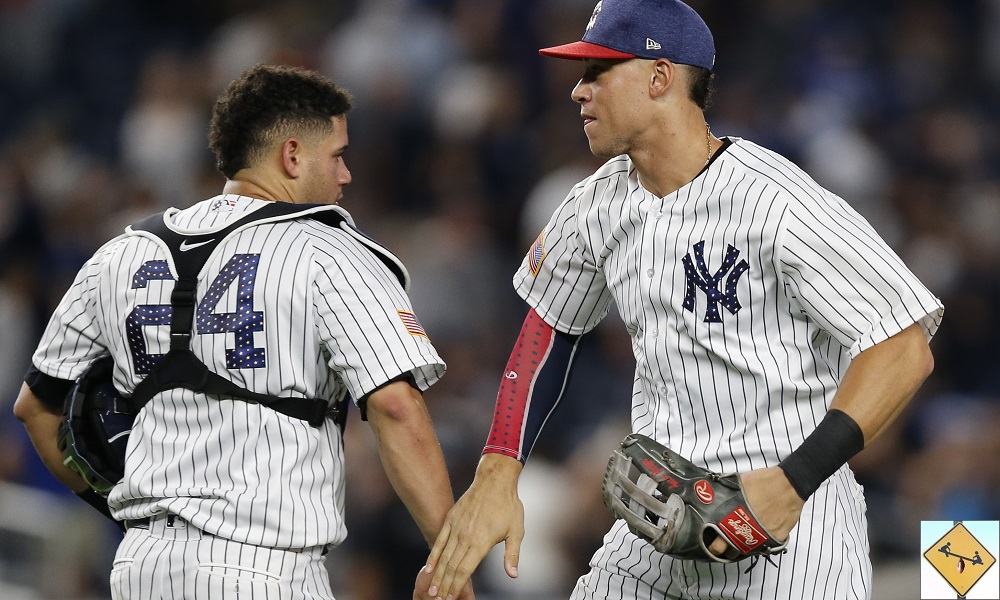 The New York Yankees are built to win the 2017 MLB Playoffs, yet their future is less clear. Do we blow up the wildcard format if things go awry for New York?

The MLB regular season has concluded. Here we are, on the precipice of a New York Yankees playoff game. The Yankees play the Minnesota Twins Tuesday night in the AL wildcard game, with the winner traveling to Cleveland.

It has been a wild year for New York. The baby bombers took over the team while still getting quality production from some previously estranged veterans. Aaron Judge, Gary Sanchez, and Luis Severino were the main story. Judge and Severino were so much better than anyone anticipated, it’s kind of unbelievable. The former didn’t have a starting job to begin the year. The latter didn’t have a rotation spot sewn up. Now, Judge is an MVP candidate, and Sevy will finish third in the Cy Young voting. Just amazing.

Yet New York also saw resurgent seasons from CC Sabathia, Brett Gardner, and Aaron Hicks. We saw a great final push from Jacoby Ellsbury and a great opening push from Chase Headley. Didi Gregorius is a star, Greg Bird still has that potential, and the bullpen is probably the best unit in baseball. Yankees!

ALSO ON BUZZCHOMP: The Gifted Feels Like Solid X-Men Reboot

If there was one disappointment from 2017, it has to be the rest of the starting pitching. Masahiro Tanaka had such a weird year. He would alternate blowups with 12 K performances routinely. He gave up home runs at an alarming clip (though so did the entirety of baseball), and now it feels like he may not be long for New York after the season. Tanaka has an opt out in his contract after this year, and each side may wish to move on. Michael Pineda was similarly disappointing, though for a much different reason. The rotation is in great flux moving toward 2018 and beyond… though that’s a problem for future New York Yankees fans Todd and Dan. Our current selves can be excited!

In the playoffs, a dominate bullpen can win the championship. The Yankees have five elite arms out there, with Dellin Betances actually being the shakiest of the bunch, which would have been yet another great surprise during Spring Training. Is a powerful lineup, one ace starter, and a bullpen enough in the American League? It should be enough to push New York past Minnesota (though a one game caveat is necessary), but how much further can the team go?

Also, if the Yankees lose in fluky fashion to the Twins, are you ready to blow up the new wildcard format? What about making the first wildcard team need to win one game, but the second would need to win twice? This Yankees team (and the Diamondbacks in the NL for that matter) is too good to go out in one game for some random reason.

Personal rooting interest aside, I’m not a fan of the one game wildcard round of the MLB Playoffs. Making the second wildcard team win twice to advance, playing the second game at their home ballpark, with the top ranked wildcard team only needing to win once at home, is an excellence suggestion. I’d also be in a favor of a three game series, best two out of three, with the first two games played at the top seeded teams ballpark. Logistically, this makes the playoffs longer and more complicated to schedule. But something about a single baseball game to decide a team’s fate has never felt right to me.

Imagine if every round of the playoffs was only a single game, played at the top seeded team’s ballpark. The excitement would be uncanny! Then we could let in more teams… and water down the playoffs like in basketball. No thank you. As it stands, our New York Yankees are in an excellent position. They play at home, looking to defeat the Twins and advance. Homefield is a real advantage in baseball, especially since it gives a team the final at bat. I like the new wildcard format, in that we have more drama in the regular season. I can live with a single game, if it means better baseball in August and September.

ALSO ON BUZZCHOMP: Don’t Diet, Eat Toward Your Goals

The Cleveland Indians and Houston Astros have been the two best teams in the American League all season. After the Los Angeles Dodgers crashed down the stretch, one could argue that the Astros and Indians are the top two teams in all of baseball. Yet doesn’t everyone want Yankees versus Red Sox in the ALCS? Don’t most baseball fans want to watch Yankees versus Dodgers or Red Sox versus Dodgers in the World Series? I suppose the Cubs returning to the World Series would also be fun, but unfortunately the smaller market teams, although better, don’t get us nearly as excited.

Unlike prior seasons, this year has been a resounding success for the New York Yankees. No matter how far they make it in the playoffs, New York had a successful season. They were/are rebuilding and managed to return to the playoffs in the process. Considering the lineup doesn’t need much work, adding some arms to the rotation in the offseason feels easy. It doesn’t always work out as expected, just ask the Boston Red Sox. But at least there aren’t huge holes to fill. The Yankees have always had stars. Fans have been lucky like that. These baby bombers proved themselves already, making baseball fun again. The 2017 season wasn’t stressful, and the playoffs won’t be either. Every accomplishment has been a gift. Enjoy it for the fleeting moment in time that it is.