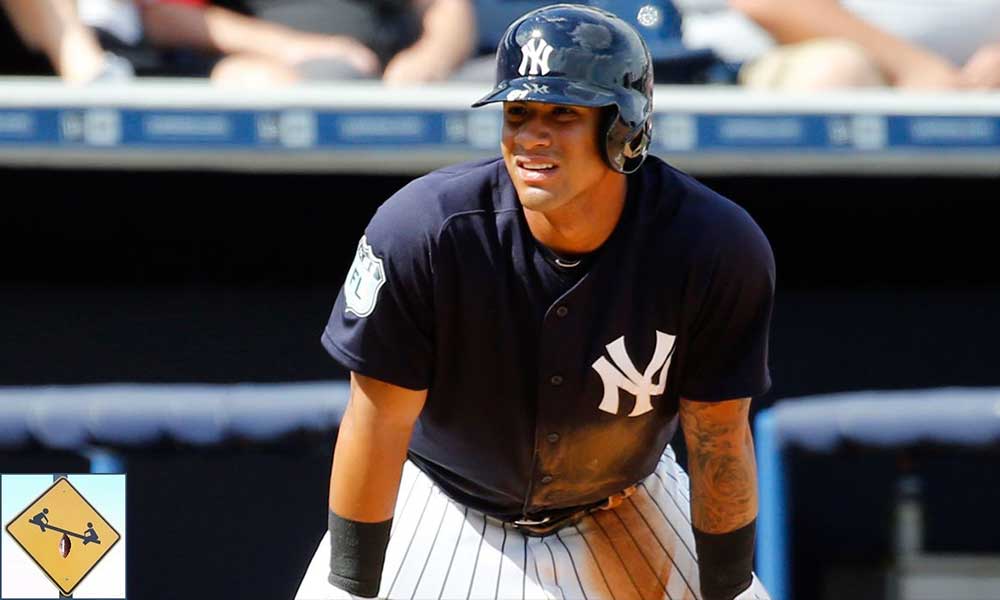 The New York Yankees are full of excitement this spring, but as the 2018 MLB season approaches there are 3 big storylines that stand above the rest. Only in New York.

Over on River Avenue, our New York Yankees have had three story lines carrying the earliest portions of Spring Training. The first was about the inclusion of Russell Wilson (*yawn*). The second involves who will be tabbed as the team’s opening day starter. Does it really matter? After a few weeks, the rotation gets flipped around anyway thanks to off days and injuries. What really should be on the mind of the Yankees is what to do at second base and third base. Obviously, coaches and management are following these positions closely, but as fans we are almost in a waiting game. It feels like we are just at the whims of manager Aaron Boone as to whether the young guys make the final 25-man roster or not. Here is where things stand:

After trades and offseason movement, five players are competing for two starting spots and, likely, four roster spots. Newly acquired Brandon Drury, who came over in a trade with Arizona, can play both spots. He is a veteran bat with power. He is the safest bet to make the active roster and would be the safest guy to slot into one of the two spots. Ronald Torreyes would be another safe option for one spot, though he has a much lower ceiling than any of the young guys and even Drury. Torreyes could make the team as a bench bat, but rewarding him with a starting second base job would be the most lackluster option available to Boone.

The young guys are made up of Tyler Wade – can play either spot, good defensively with, reportedly, a new approach at the plate this spring; Miguel Andujar – third baseman with big-time hitting and power potential and a strong arm but defensive technique to fine tune; and Gleyber Torres – one of the best prospects in all of baseball with the ability to play either infield spot, coming off of Tommy John surgery.

The Yankees have so many options with this quintet. If Torres and Andujar are ready, they offer the team the biggest upside and largest future potential. However, Andujar may not be ready with the smaller parts of the game outside of seeing the ball and swinging. Torres may not be physically ready after needing to break off some rust from missing so much time. Though New York never normally concerns itself with monetary issues for young call-ups, there is also the issue of service time. If Torres stays in the minors for a couple of weeks, he gains another year of service time before hitting free agency down the line. Small-market clubs manipulate this all the time to gain a year in arbitration rather than seeing a player became a negotiating free agent a year earlier. Do the Yankees need to care about that, though? Maybe they do and will use his injury recovery as an excuse to hold him back.

Torres and Andujar starting at second and third respectively would be the most fun outcome out of spring, though that scares me just a bit. I wouldn’t mind if just one of them made it up, with Drury taking the other spot and Wade hitting the bench. It feels like Torreyes, though a safe pick with major league experience, may be the odd man out. He just doesn’t offer anything that these other guys can’t surpass. He is a useful player but not to this roster. His only real use is as a placeholder if either or both of the big prospects needs time in the minors. The worst outcome would be feeding Torreyes a starting job because none of the young guys hit enough in the spring to warrant a look right away. The lineup – thanks to the top six guys – will still be a monster, but it would look much better without Torreyes garnering at-bats.

All three spring stories are fun, so don’t poo poo Russell Wilson in a Yankees uniform. I found that story really cool, especially since he REALLY wanted to play for our New York Yankees and had to be traded in order to do so. He was a member of the Texas Rangers, who graciously traded him to New York so Wilson could put on pinstripes and get in on the spring training action. I also loved reading about how Wilson and Aaron Judge were chatting, with the Super Bowl winning quarterback sharing his recovery knowledge with the rehabbing Yankee. Sports crossovers are awesome!

As for the two stories with actual impact on the field, I too really don’t care who the opening day starter will be. This person is likely the number one pitcher, but as you noted, that designation only matters for Opening Day. From that point forward the rotation shifts as needed. Yawn.

The real drama is in the infield at second and third base. The Yankees have a luxury, with five qualified players for four roster spots across the two positions on the field. All four players are or will be major league ready and more than capable of contributing. Does this mean a trade is in the works for New York to acquire more pitching or depth elsewhere? Torres and Andujar are not going anywhere, unless a team’s ace enters the trade equation. I’m rooting for them to secure the two starting jobs. Our young team of a season ago getting even younger, but simultaneously even more dominant, is the most amazing outcome of the spring.

I’m excited for the addition of Drury. He can teach the young players, while adding a sure-thing option to the potential four man rotation at second and third. You’re probably right about Torreyes being the odd player out, but does that make him ideal trade bait? He’s a solid player, yet a reasonably known commodity. Maybe New York wants the extra insurance, but needing it is probably our worst case scenario. Drury is a lock, as are Andujar and Torres. Tyler Wade is a wildcard in my eyes. He could go up or down this spring, making or breaking the Yankees final decisions at second and third.