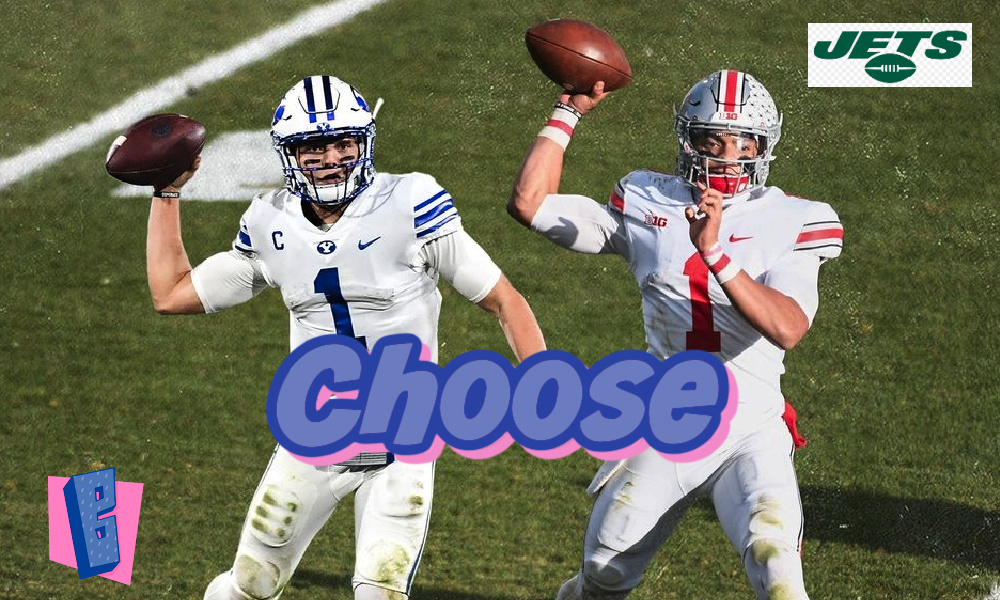 Choose your path wisely. Zach Wilson, Justin Fields, or a 2022 rookie quarterback. The New York Jets are shopping and the price is right.

Zach Wilson looked excellent at his pro day. Justin Fields looked excellent at his pro day. No surprises, as both players are being touted as NFL ready with tantalizing skill sets. To pass over either player is foolish in all but one scenario. Do the New York Jets like the upcoming crop of quarterbacks in 2022 better than these two players? Is another rebuilding season with Sam Darnold a better option? With the second pick in the 2021 NFL Draft, our New York Jets select our fate for the next four years.

There is no debate in terms of the business decision to be made. As I noted in our Seesaw Sports column on elite NFL quarterbacks, a team must choose four cheap quarterback years over any other alternative outside of possessing an elite QB to begin with. Rookie quarterbacks all have untapped potential. They have four years to prove themselves elite enough to get more money. Whether the New York Jets select Wilson, Fields, or a rookie quarterback in 2022, the monetary decision is nearly equal.

Wilson and Fields net the Jets four years of money to spend elsewhere. Rolling with Darnold this season and drafting a rookie in 2022 nets the Jets five years of money to spend, because Darnold has one year left on his rookie contract. Thankfully this decision is about more than just money. But let’s assume the Jets opt to snag a slam dunk player that is not a quarterback in the 2021 NFL Draft. The only way Darnold keeps his job after this season is if he takes the Jets deep into the playoffs. I’m talking AFC Championship game deep. Otherwise, slotting in a 2022 rookie quarterback still makes the most sense. New York has a ton of 2022 draft capital and can easily trade up if they win enough to be drafting late.

Prior to the pro days of Wilson and Fields, I was 75% in favor of the Jets selecting a different offensive player. Experts all seem to agree that a Pro Bowl offensive lineman (Penei Sewell), several great wide receivers, and a few standout pass rushers are sitting atop the draft. New York will draft a wide receiver, but the position is so deep that they will do it later. Second overall is inappropriate because of the other team needs. Drafting the offensive lineman fits their mantra of building from the inside out, yet the Jets did that last year. They also added a ton of young defensive talent in free agency.

It’s nearly impossible to talk myself out of the New York Jets selecting anyone but Wilson or Fields with the second overall pick. Their pro days were enough to swing my opinion as high as 95% quarterback with that second pick. New York is cleaning their slate and that means letting go of Darnold, at least as the starter. It’s hard to argue against the Jets keeping him as their backup. Simply announce that Wilson or Fields is the starter and keep your cheap backup who knows the team well and needs to start thinking about the next phase of his career. Every team needs a reliable backup and most get stuck with an old veteran. How well did Flacco play last season when called upon? Don’t answer that.

When shopping for Wilson or Fields, how should the New York Jets make their decision? Wilson holds the edge in terms of scheme fit, yet Fields holds the edge in terms of playing against stronger competition. There is no comparison between Ohio State and BYU, but the reverse is also true. Fields was surrounded by the best of college football at Ohio State. Wilson was not, yet still played exceptionally well at BYU. How much of Fields’ success was based upon his OSU supporting cast? How much of Wilson’s success was based upon facing weak defenses? While its fun to talk in circles and ask unanswerable questions, there are two final factors that will ultimately make this decision.

Which quarterback best fits into the Joe Douglas player mold? He loves high character players that help in their communities. He loves team captains and intangibles.

Which quarterback “feels” like the face of the new New York Jets? The New York media is relentless and fickle. They hold you on a pedestal as high as the Empire State Building, yet sit impatiently waiting to push you off into the Hudson River. Not everyone can take it.