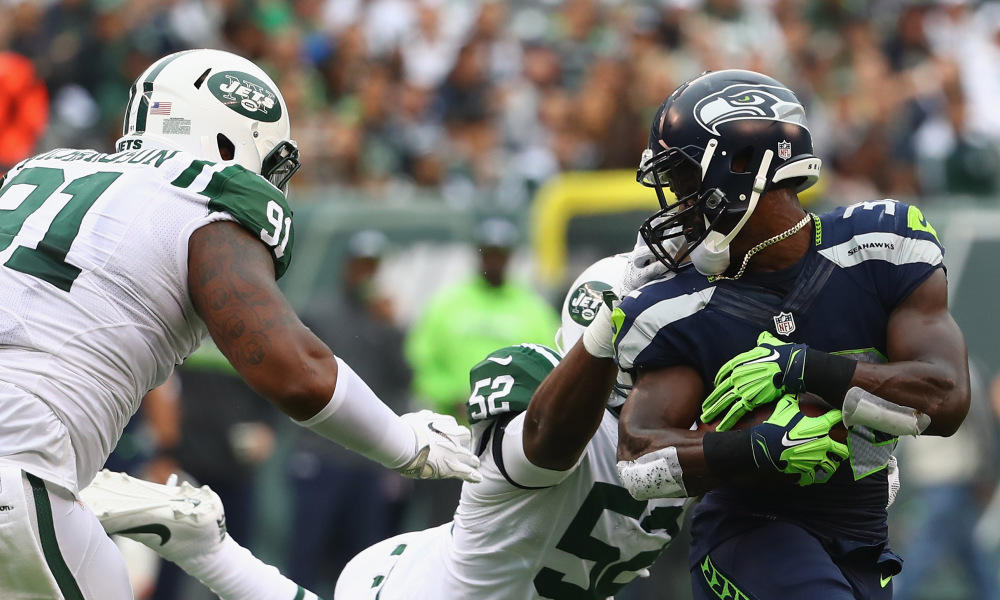 The NFL Playoffs are still a possibility, but after another debilitating loss in NFL Week 4, the New York Jets no longer own playoff aspirations. Its time to start small and think simple.

I can’t say I didn’t see the New York Jets’ loss to the Seattle Seahawks coming. After barely showing up and making more mistakes than most teams commit in an entire season versus the Kansas City Chiefs, New York was faced with one of the league’s best defenses and an incredible passing duo. The Seahawks exploited every possible weakness of the Jets, making Gang Green look boringly average. Now its time for our team to take a step back, return to basics and set aside aspirations of the playoffs. Embrace the mantra of one game at a time, one victory at a time.

Seattle’s Russell Wilson passed at will, namely to Jimmy Graham. Previously I’d stated that the Jets defensive backfield was playing too aggressive, but I missed the bigger picture. They lack discipline and continue to break coverage, missing open receivers and allowing offenses to pick them apart. Unless the Jets face a team with an average quarterback, or one that lacks a star receiver, they will struggle to stop opponents. Buffalo’s best receiver was injured and its quarterback still made the big play. New York couldn’t stop the Bengals or the Seahawks. Even Alex Smith and the Chiefs marched on them for one half of football. The defense isn’t getting a strong pass rush either. Something must change.

I’d like to believe our secondary can start playing better, but with the Steelers next up on the schedule they are unlikely to rebound immediately. The Jets need to instead get at the quarterback. Blitzes have yet to materialize into sacks since week 1 and the defense as a whole is not getting turnovers. Perhaps getting more aggressive is the answer. I can live with giving up one or two big plays, if it means more turnovers and fewer long drives by opposing offenses. Ultimately that will keep points off the board and give New York’s offense more opportunities to succeed. Whether the offense is able to capitalize is another story.

On offense the Jets need to keep running the football and keep mixing it up. Bilal Powell did well against Seattle, meaning the defense was not ready for him. If they expect Matt Forte, then give them Powell. Both running backs are exceptional in the passing game and using them both is one of New York’s keys to success. With Eric Decker sidelined and the Jets’ rookies still finding their feet on the field, the onus falls on the veteran backs to pick up the slack.

If New York’s backs are integrated more into the passing game, then someone needs to stay in and block. It appeared as though Ryan Fitzpatrick had ample time to throw versus Seattle, a good sign going forward as the Seahawks have one of the best defensive lines in football. But Fitz was still out of sync with his new receivers. It seems he has yet to develop the same chemistry he so naturally found with Decker and Brandon Marshall. Now that the secret is out on Quincy Enunwa, he is not going to catch defenses by surprise. The rookie receivers must step up and catch the football. There were far too many drops against the Seahawks and Fitzpatrick is never going to trust them if they continue that trend.

There’s no point in making excuses for the Jets. They’ve made the same mistakes over the last three weeks of football games. Its time for the coaching staff to adjust. The game can not be placed in Ryan Fitzpatrick’s hands. He feels the pressure and forces throws. Hence a record amount of interceptions. The game can not be placed on the defense’s shoulders either. New York’s secondary is not good enough to handle the responsibility. For the Jets to win, the team must lean on its strengths. Find a pass rush once again and get to the quarterback. Lean on the veterans on offense, Fitzpatrick aside, and keep giving the rookies a chance to make plays.

The AFC is very crowded in the middle this season, but already six teams have separated themselves. The Jets must take it one game at a time, achieving one victory at a time. Forget the rest of the conference and forget the playoffs. All that matters is the next team up. Get a win and there’s hope. Keep losing and its all over.