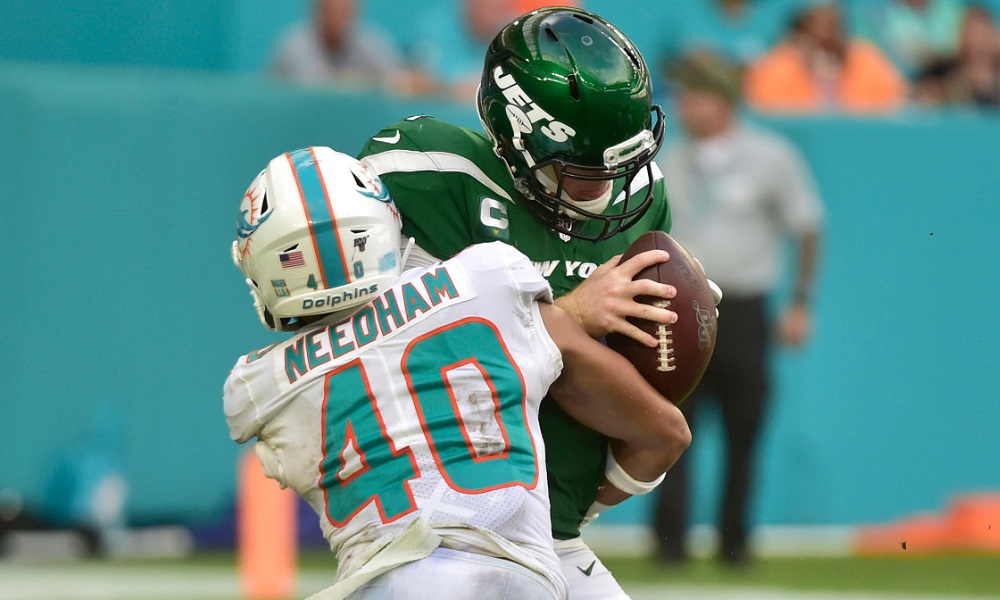 Never in my 30+ years of rooting for the New York Jets have I seen such fecal excrement. The team discovered a place beyond awful that no one knew existed.

Is there truly a place beyond awful?  Is that actually a thing?  A few words come to mind when talking about the New York Jets and their putrid performance against the Super Bowl bound Miami Dolphins.  Since my editor would delete them, I’ll let you use your imaginations. The Jets are now 1-7 on the year, their second worst start in the franchise’s awful history of loser football.  The only other time the team sunk this low was in 1996 when they started 0-8 and ended with catastrophe.

Prior to Sunday’s debacle, I was willing to let my friends talk me off the ledge.  “They have a ton of injuries” or “We need to let them get settled under a new coach” was the common theme among naive believers. Time’s up and enough is enough.  What we saw versus Miami was more than any of those things and worse than even I thought possible. It was a culmination of the worst coaching I have ever seen in my life, and I’ve lived through the Rich Kotite era.

Adam Gase should be ashamed, embarrassed and moreover, fired for his display of what can hardly be considered coaching.  Over the past two weeks New York has looked great on their first drive, moving the ball with ease and scoring a touchdown each time. The problems have come with everything afterwards. When push comes to shove and the real coaching needs to be done, this coaching staff has been pathetic. That’s right, Greg Williams I’m looking at you too.  The so called “quarterback whisperer” and “defensive guru” now look like two clowns playing with each other inside a parked car of a Wendy’s parking lot.

Not once in the second half against the Dolphins, when the Jets were only down by nine points, did I think they had a chance to win.  Not once. Gase continues to make zero adjustments and has seemingly quit on his team.  Maybe he wants to get fired. With a little over two minutes remaining in the game, this coach of ours watched his team march right down the field and didn’t think of calling a time out.  When the Jets had the ball on the Dolphins’ five yard line, there was not one look to Le’Veon Bell.  It’s bad play calling and bad game management in every way.  Gase was out-coached once again, this time by a rookie.  Good thing New York passed on Mike McCarthy, right?

The Jets defense is now a joke.  Jamal Adams ran his mouth all week about how upset he was that the Jets were “shopping him around” the league. How does he react?  By acting like a little bitch and getting burned.  Adams chose not to play and it hurt the entire defense. He missed four tackles that would have stopped drives, and got burned on the opening touchdown of the game when he clearly forgot he was playing safety. “Fitzmagic” carved up New York’s defense and looked like Johnny Unitas reborn. It’s hard to imagine a team that is clearly trying to lose could look as good as they did on Sunday.

This football game wasn’t even close.  The Dolphins completely dominated the Jets.  Sam Darnold, who I still believe in, is regressing quickly.  He’s no longer being patient and is trying to force passes like a wide-eyed rookie. Every Jets fan’s worst fear is coming true. We may have to start the process of finding a franchise quarterback all over again.  Yet the offensive line is historically bad, so you are going to have games like this.  Darnold’s decision making is fixable, but this comes down to coaching.  Is Gase in his ear?  Is he mentoring him like he should be?  There was a picture of Gase on the bench, by himself, with no one even close by.  Pictures speak a thousand words and this coach is as good as cooked.  #FIREGASE

Bottom line is that this coach needs to go.  In the words of Warden Norton, “Not tomorrow, not after breakfast, now.”  Should it happen?  Yes. Will it happen?  I’m not convinced. If the New York Jets organization was smart, then they would do it now, but that won’t happen.  If the Jets lose to their inter-city rival, the New York Giants, then we’ll see the fireworks from the space station. Prediction: Giants 34 – Jets 17