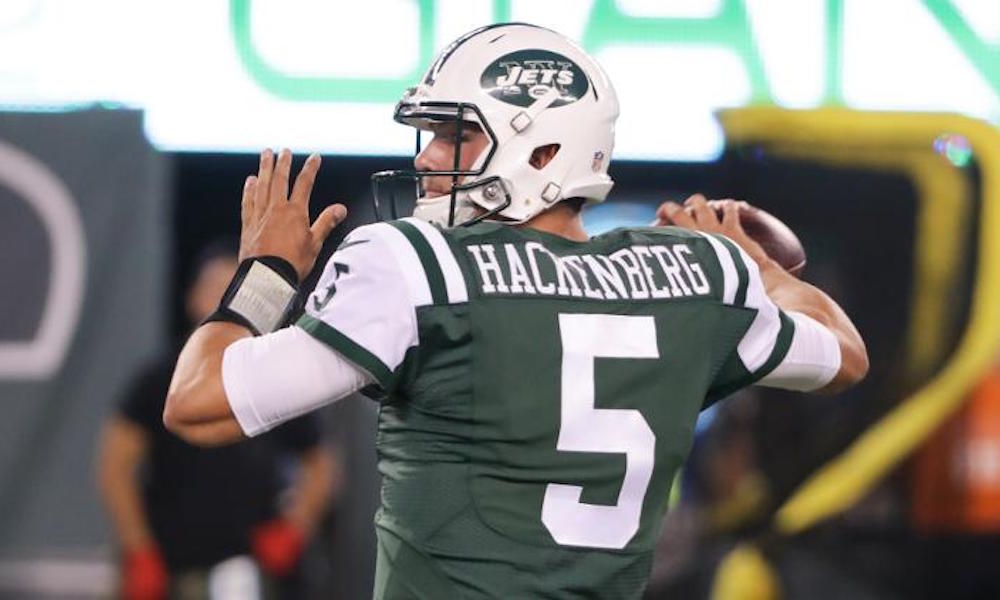 Some NFL experts cry for teams to sit rookie quarterbacks a year. Others insist they must play. There are numbers, but no matter what, the New York Jets can’t win with Christian Hackenberg.

It’s an odd state of affairs, as the football landscape copes with an ever changing game. The NFL game is evolving and teams like the New York Jets have struggled to keep up without a reliable quarterback leading the team. That right there is the key, leadership under center. The term ‘Franchise Quarterback’ gets thrown around, but all anyone truly wants is a reliable player who learns to minimize mistakes and leads his team through thick and thin. Alex Smith has thrived as such a player, despite rarely wowing anyone besides his family. Which brings me to Christian Hackenberg and the New York Jets.

New York needs a team leader and a quarterback. Players learn by playing, but the QB position has always been a bit of an exception. Stars come from all over the place and with so many quarterbacks getting drafted in the top five picks and the opening two rounds, many fail miserably. They are thrust into action on a bad team desperate for a spark. Exceptions like Peyton Manning overcome bad rookie years to become hall of fame players. Exceptions like Dak Prescott dazzle us as rookies behind an outstanding offense. But most rookie quarterbacks are on bad teams with bad offenses, and most are not Manning or even Prescott. Most need time to transition and most are not given the time.

The New York Jets chose to give Christian Hackenberg time. He had raw talent, but lacked the experience to lead an NFL offense. This is rather common, but sitting such a player is not. Hackenberg needed the time to sit and watch, to learn and listen. He sat behind a savvy veteran who struggled through one of the toughest seasons in his long career. Ryan Fitzpatrick is an excellent mentor, regardless of how bad he looked on the field in 2016. So why have the Jets been chastised for red-shirting Hackenberg? Why are the player’s abilities being questioned simply because he was given the time we all knew he needed to transition to the pro game? Simply put, the Jets can not win with Hackenberg. No matter what they do, the media will crucify them.

With the right amount of time and the right coach, Hackenberg can develop into a starting quarterback. If and when that happens, the Jets will name him their guy and everyone will pull out their microscopes. The only way this scenario ends well is if both Hackenberg and the Jets are very good together. If the team wins, but the player struggles, it was all a big mistake. If the player does well, but the team struggles, then it wasn’t enough. The double-edged sword of hypocrisy is obvious and well known, but as a fan of the Jets I wish the media would give our leadership the benefit of the doubt just once.

Some teams get the benefit of the doubt, but not all of them have earned it. New York certainly did not earn anything last season, so the scrutiny is warranted. But when it comes to Hackenberg, I for one think they made a smart decision and stuck to it in the face of overwhelming adversity. It takes courage to stick by a decision when the entire world is screaming at you to change your mind. It takes confidence to volley questions about a player you’re not ready to discuss in detail. Will Hackenberg’s talent become what everyone hopes? Can he be a team leader? We still have no idea.


After one season on the bench, we know as much about Christian Hackenberg as we did after the 2016 NFL Draft. Many pundits have tried to read the tea leaves, fanning the flames of dissent. He got put on the shelf, so there must be a problem. Not true. He never saw the field, so he can’t play. Not true. Numbers for quarterbacks drafted in rounds one and two who don’t see in-game action during their rookie years are not good. But rookie quarterbacks don’t generally play very well either. Only the exceptions to the numbers and the rules become truly great players. Christian Hackenberg is currently an exception.