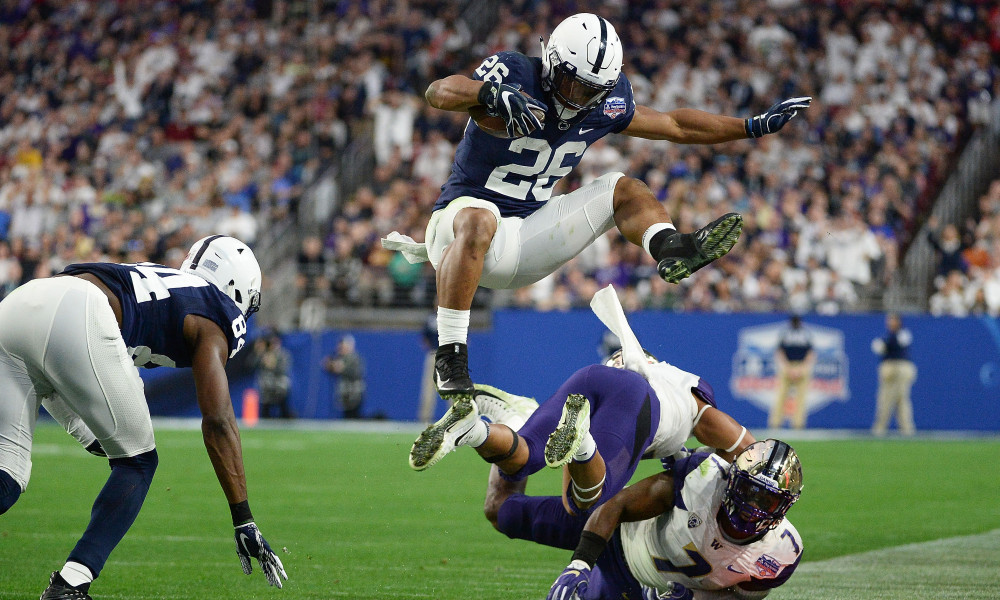 The New York Giants have the second pick in the 2018 NFL Draft. Many people expect the team to select running back Saquon Barkley. But there is a strong case to be made against such a selection.

The first round of the 2018 NFL Draft is this Thursday, April 26. The New York Giants have the second overall selection, and one player seems to be settling in as the most likely selection for Big Blue. That is running back Saquon Barkley out of Penn State. He is the top graded player overall according to ESPN and fits a dire need for New York to boot. There are obvious reasons as to why the Giants would select him and why it would make perfect sense. There is also a case to be made against taking the former Nittany Lion though.

The case against selecting Barkley really has nothing to do with his game. He is a talented runner and pass catcher. He can seemingly play every down in the NFL and is adept at most or all aspects of a running back’s job. There exists a peerless blend of size, strength, and speed with him, especially for his position. Barkley feels like the real deal. He also may be wasted at the second overall pick.

Barkley is great, but this is a rather deep draft in terms of running back talents. Two other backs – Sony Michel and Derrius Guice – have also received first-round grades. Another half-dozen backs have elite skills that can be utilized to a great degree in the NFL. Kerryon Johnson will still be on the board on Saturday of draft weekend. He is a powerful runner with knowledge of pass blocking and the receiving game. Nyheim Hines will be around on Saturday as well. He is a game-changing player out of the backfield and on special teams. These guys and others aren’t necessarily three-down backs like Barkley should be, but they can also be drafted upwards of 100 picks later. What is more valuable, especially in this day and age?

Would the Giants, or any team for that matter, be better served taking Barkley in the top three and then piecing together “more important” positions in the later rounds? Or does Barkley’s position preclude him from being worth that top pick? Instead, New York could look to other positions at two and find a perfectly capable back in the middle rounds. We see evidence of this every year, most recently with Alvin Kamara and Kareem Hunt last season. They were both selected in the third round and became, arguably, the two best backs in football. It’s that easy!

The reason it’s that easy is because the sport currently lends itself to backs being essentially replaceable cogs. No runners, even the elite ones, carry the workload of RBs in years past. That means the runners at every skill level have fewer chances to make a difference. They also impact the game in varying ways, meaning dynamic receivers like Kamara and Hunt are perhaps more valuable than a Leonard Fournette-type. Now, Barkley is that dynamic receiver, but so are loads of other players in this draft.

Lastly, the turnaround on elite backs is off-the-charts fast. Great backs are no longer great within a few years. Take a look at the rushing leader board from as recently as 2014. Of the top 10 runners, eight are no longer on that level, six are no longer starting players, and four may not even have jobs in 2018! But 2014 was just a year from the recent past picked at random. What about 2015? There, an even more recent season, only two of the top 10 can be considered anything close to elite backs. This was two seasons ago! How, then, can any team justify using a second overall pick on this position? It seems asinine.

The last piece of the case against Barkley has to do with who is available in his stead. If all the “top” players were wide receivers and safeties, maybe the Giants would be smart to go with Barkley, since they don’t really need to spend a lot on those spots either. However, the other top recruits are people New York could sorely use. Pass rusher Bradley Chubb could immediately start opposite Olivier Vernon. Guard Quenton Nelson would surely start Week 1 for this roster. A quarterback could be a viable long-term play at the two spot as well, especially if the Cleveland Browns pass on Sam Darnold with the top pick.

The case for drafting Saquon Barkley is easy: he’s great. The case against the selection is trickier but equally logical. There are too many other great runners in this draft to necessarily spend that high pick on him. Also, it may never make sense to spend a high pick on any running back, regardless of his positional peers. And thanks to supreme talents at other spots, the New York Giants have plenty of other options that would better serve its overall roster construction. That said, Saquon Barkley would be a fun pick at two. I hear he’s great!