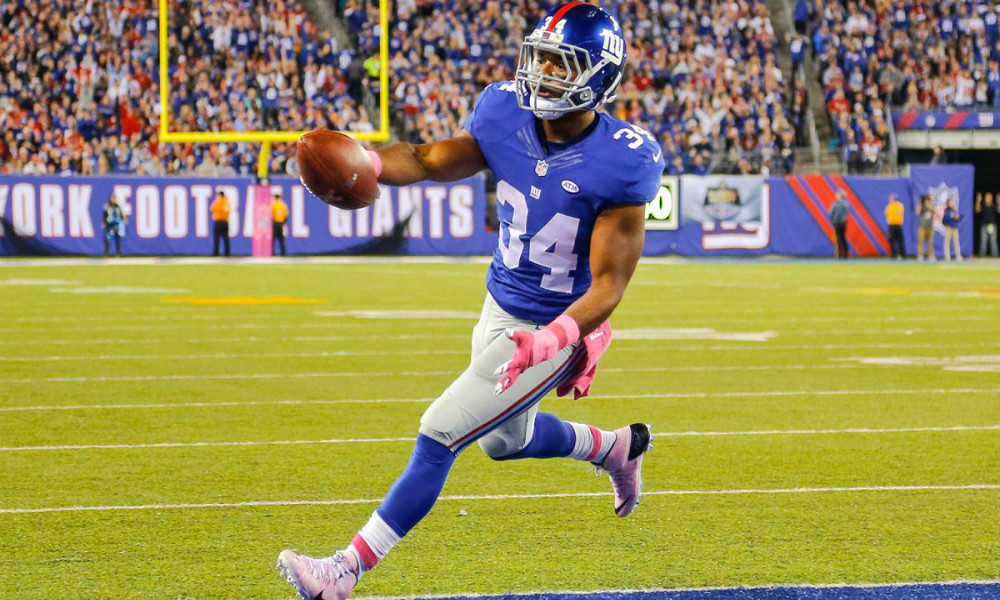 The New York Giants don’t have a definitive starter or three-down back at the running back position, and it seems to be by design. Once again in 2016, New York is taking the approach of quantity over quality in hopes of filling a position.  (Photo Credit: foxsports.com)

Just like with a few other positions up and down the roster, the New York Giants enter 2016 with a multitude of options at the running back position, and this was by design. The same strategy took place at linebacker and safety on the defensive side of the ball. The idea is for New York to come away with production by either having a player emerge from the position battle, or by rotating in substitutes to keep the effort up throughout a game. There are no stars here at running back. There wasn’t supposed to be.

A number of teams around the NFL employ this strategy to some degree. Teams are under the belief that the position of running back is too taxing to put on the shoulders of one man. Time shares can be found all across the league, but no one is taking it to the same extreme as the Giants.

New York has six running backs that could be in line for major carries this season. Not a single one of them is well below the others in a pecking order, and no one stands well above the competition either. The sextet is composed of Rashad Jennings, Shane Vereen, Andre Williams, Orleans Darkwa, Bobby Rainey and Paul Perkins. Some are new faces; others have been around just a little while. None of the six are established Giants veterans. The most experienced of the bunch in a NY uniform are Jennings, who has been here just two seasons after playing the first four years of his career elsewhere, and Williams, who has been in the league for two years total, both with New York.

Jennings is the favorite to at least be the first and second-down back. He has never carried the ball even 200 times in a season and has a history of injury issues, but he is the most solid player of the bunch. He collected more than half of the team’s total rushing yards and averaged an acceptable 4.4 yards per carry in 2015. But Jennings can’t or hasn’t held up for a full season. He also is not a big player in the passing game, having never topped 300 yards receiving in any season of his six-year career.

The favorite for third-down back falls to Vereen. Vereen came over from the New England Patriots last season hoping to make a splash in interesting formations and on the perimeter. It didn’t totally happen that way, though he was a key member of the passing attack, finishing third on the team in targets among all players. With the additions to the wide receiving corps, that will hopefully not be the case again this year through no fault of Vereen’s, but fans would still like to see him make more big plays. His 8.4 yards per catch average last year was the lowest of his four-year career thus far.

Battling for carries with those top two will be the rest of the crew, and no one is quite sure how the rotation will shake out or who will even make the final 53-man roster. Williams has been a disappointment in his two years in the NFL. He was a goal-line back in year one, scoring seven times, but through two years he has never been able to find consistent holes. He averages 3.2 yards per tote for his career, and 2016 may be his last chance to make a mark for this team.

This may be Rainey’s last chance to make an impact on the Giants as well, even though it’s also his first chance. Rainey was added through free agency this offseason, and though he had some nice spurts with Tampa Bay in past years, there has been no breakout. He also enters behind the eight ball since he is brand new to this offense, whereas four of his five competitors were members of the Giants last season.

Paul Perkins is the other newcomer, but he is new to the entire league, having been drafted in the fifth round of the 2016 NFL Draft. Perkins will get some chances to shine. It is unlikely his future is decided in either direction based off of this season. There doesn’t appear to be enough carries available to foresee a breakout, and the organization will surely not give up on a rookie it liked after one season of low usage.

A similar argument could be made for the final man on this list, Orleans Darkwa. Darkwa is a peculiar case though. The team loved him last year. He had a real coming-out party during the middle of the season, but then he fell out of the rotation completely. There is no telling how the team feels about him or even if he’s in the plans for the future at all. He is just 24 years old and seemed to run with a bigger jolt than his teammates when given the chance in 2015.

If New York carries just four running backs (not counting full backs or h-backs like Will Johnson) like it has been doing in recent years, that leaves two players out to dry. The most likely outcome, in my mind, is that Williams and Rainey are the ones who don’t make the cut. Though at least the former is still a very young player, this pair seems to possess the lowest ceiling and perhaps the lowest floor of the bunch. If Perkins struggles to pick up the NFL game or the playbook by preseason, that could alter the plans a little. Then the Giants would likely need to keep an extra guy who could also contribute on special teams, as to not eat up roster spots for one small role while covering for the rookie who may be behind in his development.