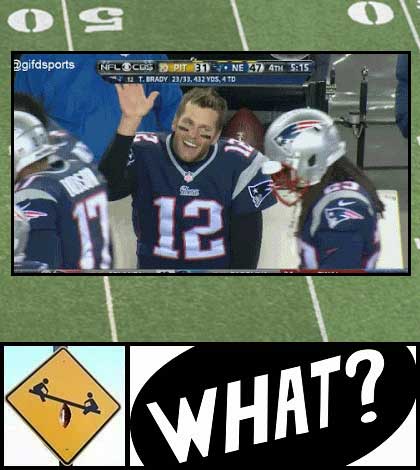 The New England Patriots take the stage as we continue to celebrate the Holidays with Boston sports. It’s the Holiday edition of Seesaw Sports and we’re asking What happened? Tom Brady laughing and an angry referee. Happy Holidays.

In honor of our Boston themed Holiday celebration, the NFL Playoffs, and the only team to have clinched everything prior to week 17 of the 2014 NFL season, I present to you the following.

A perplexing New England Patriots image, followed by a bonus Tom Brady GIF showing what I assume to be his reaction to the first image.

Description: A good old-fashioned episode of yelling in the face of a referee gets a Tom Brady sized celebration from the man himself. The New England Patriots are usually all business, but first yelling at the authority and then a crazy faced high five!

You seemed to put a lot of effort into this forced diatribe against New England, so I am going to gloss over the fact that these pics, both moving and stationary, are obviously from two different games.

Nevertheless, it wouldn’t surprise me to hear that Tom Brady would save a well-deserved congratulations for LeGarrette Blount for another week or even another season!

Brady is a true son of a bitch, in the good way. That’s why Boston fans love him. He swears all the time, runs around like he owns the field and is big and beautiful to boot. The latter half of this scenario could have happened two years later, after Blount left the Patriots, signed with Pittsburgh and then returned to New England. Brady was happy to have the big bruiser back because of his running style, but also to deliver that high five that Blount earned a few seasons prior.

Nothing gets past Brady. That’s why he’s a legend. I’m sure Tom noticed the aggressive ribbing LeGarrette was delivering to the official after a particularly frosty call. Tom tucked that info away. Seasons passed, players moved on, and Brady always remembered what Blount did to stick up for his Pats.

As luck would have it (or destiny if you so dare), Blount was released by the Steelers only to return to the Patriots and into the huddle of Tom Brady yet again. This time, the quarterback wouldn’t miss the opportunity to stick that big paw out for Blount to slap. He deserved it; he earned it all those many years ago.

Photos courtesy of notsportscenter.com, the New England Patriots, and the NFL.