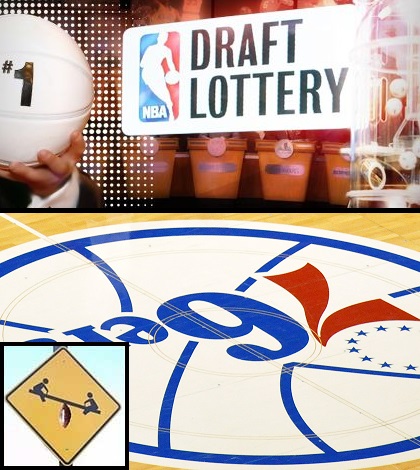 As the calendar flips to March, the Philadelphia 76ers have lost 12 consecutive games. They have the worst point differential in the NBA (-10.7). They recently lost to the team with the worst record by 40 points. And they just traded away arguably their best player for someone they cut from their roster.

Things are not all bad for Philly though, because as NBA fans and followers are aware, the 76ers are bad on purpose. They are “tanking.”

They aren’t the only NBA team to purposely make themselves worse over the course of the season in order to finish with as bad a record as possible. Other culprits include the Boston Celtics, Utah Jazz and Orlando Magic.

These teams, and possibly others as well, wanted to be as bad as they could this season. Whether that meant trading away valuable players for nothing (Philadelphia), not bringing back very good players on affordable deals (Utah), or extending injuries longer than necessary (probably all of them), the objective was clear. We want to get the most NBA Draft ping pong balls!

The reason for this is clear. The 2014 draft is primed to be one of the best and deepest in years. Although the elite college prospects are not appearing to be the guaranteed franchise players everyone originally thought entering the season, the draft should still have a number of possible All-Star players.

Do you find anything wrong with the tanking strategy personally? Since neither of us are a huge fan of one particular team, we cannot directly address what it’s like to root for someone tanking. However, the theory is still able to be discussed.

And if it seems morally wrong or corrupt, what are the alternatives? What can the NBA do to prevent this moving forward? Some of the best basketball minds in the nation are perhaps discussing this very subject this week at the Sloan Analytics Conference. But I’d rather hear what you have to say about it.

I have to draw a very firm line in the sand when it comes to tanking as a professional sports organization. It is most prevalent in the NBA, mainly because of the ping pong ball lottery system, but we have to assume it goes on in the other major sports as well. I draw the line at deciding to tank before the season begins. Its ludicrous, unfair, and goes against the entire point of sports. I realize that as a General Manager you can assess your roster in the pre-season, assess your division and conference, and easily realize that your team is going to suck. But this is still an assumption. Your job was to assemble the roster, so have some faith in it. Tanking an entire season is inexcusable. Its one thing to see the writing on the wall and another thing to help connect the dots. The Chicago Bulls are probably the best example of a team who could have mailed it in after losing its star player in the fist month of the NBA season. Instead they kept playing hard and are on a sick hot streak right now. Go team!

Having said all that, I have no issues with tanking the second half of a losing season. The All-Star break of the NBA season, or the midway point for another sport, is the time to make this call. Can your guys get it done? Do they have enough to make a playoff push? If not, by all means play to lose and play for next year. But just know you’re asking for it to bite you in the ass. Fans have long memories and tanking one season is fine, but doing so every two or three seasons like some teams do crosses another very firm line.

Sports exist because fans are obsessed with teams and players. On average a fan would take one losing season for potential greatness next year or the year after. However, no fan wants that losing season to be this season. Where’s the fun in watching? I know you started discussing the 76ers and the NBA, but I’m going to use my New York Jets and the NFL as a perfect example of finding solid balance in the tanking arena.

I knew entering the 2013 season that the New York Jets were not going to win the Super Bowl. I also knew that they probably weren’t making the playoffs. Coming off two bad seasons with many question marks at key positions, I saw the writing on the wall. It was going to be a rebuilding year. That being said, the team did not tank on the season. They groomed a new quarterback, won some memorable games against top teams, and improved dramatically from the year before. It was a fun season as a fan, even in a losing effort. Tanking may have landed them a top five pick, but NOT tanking landed them so much more. There is room for growth. Hope for next year. I can’t say the same thing about the 76ers or the Utah Jazz.

What’s your feelings on the issue here? I feel like I began in favor of it and talked myself onto the other side of the ledge.