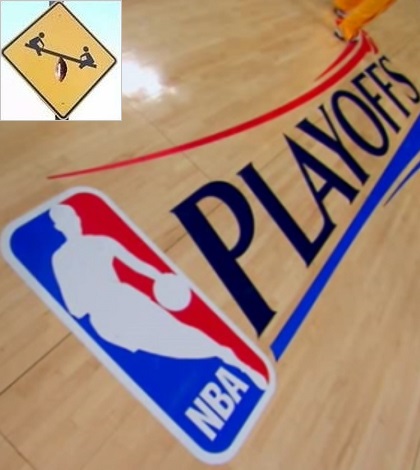 We are down to the final four teams in the NBA playoffs. After scores of game sevens, upset alerts and excitement, the final four happen to also be the top four. Both the eastern and western conference finals pit the top seed against the second seed, Indiana versus Miami and San Antonio versus Oklahoma City.

Was this a perfect storm for the NBA or did they drop the figurative ball? On the one hand, the first round was incredible. Overshadowed by the Donald Sterling story, every matchup to start the playoffs was worth watching, with the possible exception of Heat – Hornets after Charlotte saw its best player get hurt. Other than that, there were five game sevens and six competitive series. It was incredible.

But then we got to the conference semis and no one seemed out of place. There was no surprise intruder into the second round. And that routine continued through a slightly less interesting round into the conference finals where we stand today.

Whether you believe in Oklahoma City or if you struggle with what to make of Indiana, the four best teams are alive and (relatively) well. So the NBA playoffs managed to combine two perfect attributes: excitement and series that go the distance with having the best teams advance.

March Madness could be so lucky. It’s like having buzzer beater after buzzer beater in the NCAA Tournament but the favorite and top seeds are the ones continually advancing. Was this a good thing for the NBA then? The outcome is the same as always. Would it have been better if Washington sneaked into the finals? Or are results of these series not actually the most important thing?

Through the Sterling business, the coaching firings, Steve Kerr getting $25 million even though he’s never coached before and all the rest, maybe good games are their own reward and if Miami plays San Antonio again, it is what it is.

I’m not sure whether to call this a perfect storm, but its certainly the best playoff outcome the NBA could have hoped for. Round one was exciting, riveting, and the teams with the biggest stars advanced. Round two was much less exciting, but in the grand fashion of getting on with the show, the series all ended quickly and the playoffs promptly moved on to the best round of action, the conference championships. A final plus from round two, Donald Sterling’s team was eliminated. There is no longer a worry that his name will be associated with a championship. Phew.

Now we’ve reached the NBA Conference Finals. My instant reaction was ‘Booooo,’ the four teams that everyone expected to make the conference finals way back when the season began in the fall of 2013 are the four teams that are left standing. This is a bad thing for most sports, but these feelings were fleeting. I gave this issue thirty more seconds of my time and instantly swung to the side of ‘Woooo.’ We as NBA fans have two fantastic matchups in the conference finals. Any other combination of teams would be significantly less interesting. The NBA, more than any other professional sport, thrives on the success of individual star players. As a fan I want to watch these star players, not a team of also-rans. So thank goodness the Spurs are facing the Thunder and the Heat are facing the Pacers.

These two series are the most important thing, the only thing that matters after a long NBA season. Great basketball is what I want to watch and we’re practically guaranteed this with both matchups containing their conference’s best teams, chock full of Hall of Famers. I don’t want to see Washington play the Miami Heat. I want Paul George versus LeBron James. The same goes in the west. I want to see the league MVP face off against this past decade’s most dominant group of players that has managed to stay together in San Antonio. It almost doesn’t matter who wins at this point. The NBA Finals will be great.

Now I do have a few wishes for the NBA Finals. Perhaps we make our actual picks on Friday, but personally I want to witness LeBron James and the Heat going for a three-peat, reaching the finals in four straight seasons. I want to witness another last hurray from the Spurs and see if they can avenge last year’s painful defeat. I want to watch this year’s league MVP face off against last year’s league MVP…. Ok, I can’t have all of that. But regardless, the NBA Finals will be played by teams from small cities with big name stars. This is a trend I can get behind.