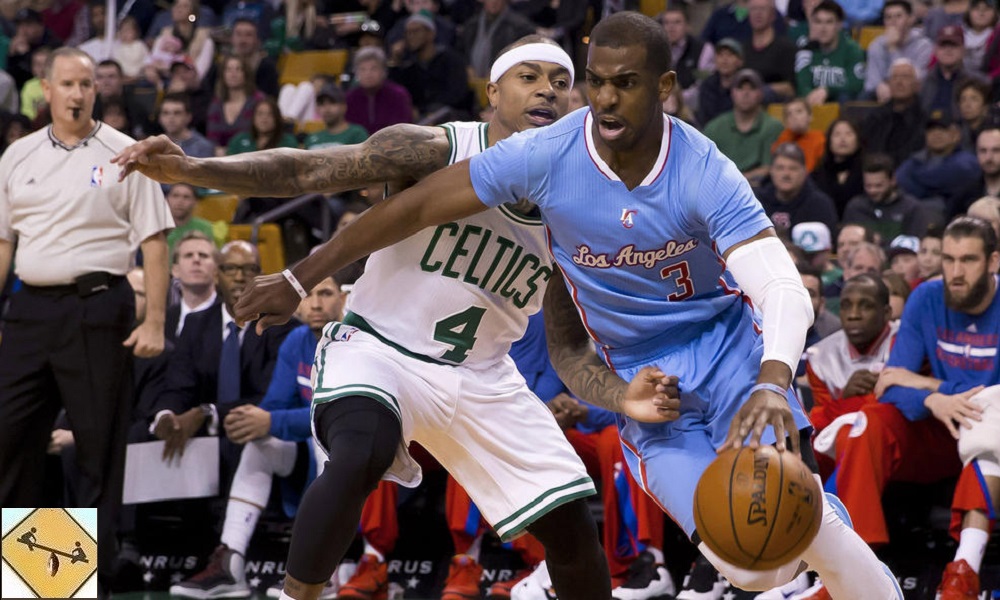 In a Bizzaro world where the Cavs and Warriors don’t make the Finals, which NBA teams go all the way? The Los Angeles Clippers and Boston Celtics/Atlanta Hawks! NBA Predictions 2017.

The Golden State Warriors are in last place in the Western Conference, tied for the worst point differential in the entire NBA! These are facts! Should they trade Stephen Curry and fire Steve Kerr now or wait another week? We aren’t actually that idiotic here, but what if we were forced to pick an NBA Finals matchup that did not include Golden State or Cleveland. Who would you go with?

My selection out West would be the Los Angeles Clippers. They have still never made it out of the second round, but I think this is finally their year to get over the playoff hump. Sure, San Antonio has looked unbelievable in its two games to start the season, but that was to be expected. There is no reason to change an opinion of anything after a few games of an 82-game season. Instead, its Los Angeles’ upside that has me intrigued.

There have been very few series where the team’s stars have all been healthy when the games mattered most. If the Clippers get into the second round with all of Chris Paul, Blake Griffin, DeAndre Jordan and JJ Redick, they will be a tough out for anyone, including Golden State. I even like Griffin’s sneaky low MVP odds this season coming off of a lost year due to injury. He’s between a 30- and 50-1 long-shot depending on the source. It wasn’t so long ago, just three years, that he was considered arguably the third-best player in the NBA. The Griffin and Jordan frontline remains one of the best and most athletic in all of basketball. There is a reason this nucleus has won at least 50 games for four straight seasons.

The East is more difficult. I don’t love Toronto or Boston, the conference’s two main contenders outside of Cleveland. Toronto’s stars worry me. Kyle Lowry and DeMar DeRozan both came up pretty small in last year’s playoffs, and though DeRozan is a prolific scorer, he doesn’t offer much else and has a one-dimensional game. Boston is probably where’d I’d turn simply because there is no better option. The Celtics have two almost-stars in Isaiah Thomas and Al Horford. Neither is going to win a game by himself in the postseason, but both, teamed with a deep and talented roster, could go plenty far…assuming the Cavaliers are out of the picture, which was the premise of this exercise. Boston has little rim protection, meaning its perimeter defense will have to control everything. It is perhaps the best team in the NBA to accomplish such a feat, but it is still a tall order.

A Clippers-Celtics finals would be kind of fascinating. Doc Rivers versus his old team; Boston versus (the other) LA; Brad Stevens, the best young coach in the league, in his first finals; Thomas versus Jamal Crawford in the ultimate heat-check showdown. Alas, the chances are too slim to even consider it. One could sneak in, taking advantage of a well-timed injury to a competitor, but to see both teams would be something very un-NBA: unpredictability.

We have officially entered the Bizarro world, where the NBA is unpredictable and the favorites don’t always win. I love this so much! In terms of NBA Predictions 2017 in our Bizarro world, one which does not find the Warriors or Cavaliers in the NBA Finals, I lean heavily on single season motivation. Which players have the most to prove, the most to play for in 2017?

In the Eastern Conference I see the biggest chip on a shoulder belonging to the Atlanta Hawks. They have been to the NBA Playoffs for nine straight seasons, reaching the Eastern Conference Finals just two years ago. Paul Millsap and Kyle Korver were already excellent. Now Dwight Howard joins this team as the player with probably the most to prove in the entire league. Depth could be an issue for them, but in a perfect world where nothing happens like we expect it to, Atlanta is a dynamic team with everything to prove. They win the Eastern Conference.

While Boston and Toronto intrigue me in the East, it’s the Hawks who are in a make or break season. This is the key factor to overcoming such tough competition. The same is true in the Western Conference, where we agree. The Los Angeles Clippers win the West.

Chris Paul is nearing the end of his career. Blake Griffin has to prove he is still an All-star and earn his next contract. Coach Doc Rivers needs to prove he can get a second team over the hump, one with only a single hall-of-fame player currently on its roster. Nearly everyone on Los Angeles has something to prove this season. Exercising playoff demons is a major feat and defeating your biggest rival who also happens to be the Warriors is no easy task. But the Clippers have the depth and talent to accompany their motivation this season. They have the most to prove.

NBA 2017 Predictions: Every Sleeper in the East and West


Will it be the Los Angeles Clippers versus the Atlanta Hawks or Boston Celtics in the 2017 NBA Finals? In our Bizzaro world it will be. We’re crossing our fingers!