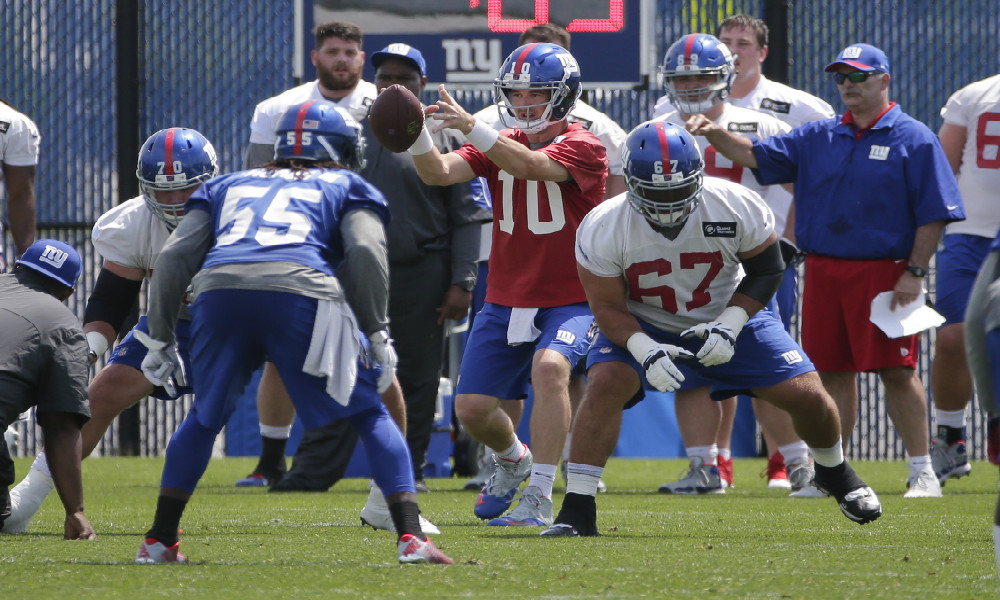 Week 8 of the NFL season is a bye for the New York Giants, meaning it is the perfect time to assess the team with some report card grades. Uh oh.

Entering their Week 8 bye, the New York Giants are 4-3, yet that is good enough for last place in the suddenly beefy and imposing NFC East division. Such a record would currently put them in a tie for first place in three other divisions in football. Before Giants’ fans complain too much though, the team has done plenty to this point to warrant a last-place designation. Despite the winning record, it has been an ugly season in New York to this point. The week off was much needed. Here are how things stand around the roster.

Eli Manning has not been terrible, but he also hasn’t been anything approaching good. Eli gets a solid if underwhelming C grade. He has put up some nice numbers, including three separate 350+ yard games already. But those have been accompanied by many empty drives and failed scoring opportunities. Manning has also missed many more throws this year than fans are used to seeing. Receivers are running open and Manning is missing them. That’s stuff that is supposed to happen to quarterbacks not on Eli’s level.

The unit has been bad, but it deserves a pass for some of that. Shane Vereen, the most versatile and useful running back on the roster, is out injured and only played in three games. Rashad Jennings, the only guy on the roster even approaching the title of every-down back has missed time as well. On top of that, the offensive line has done these guys no favors. According to Football Outsiders, the Giants’ o-line ranks 27th in the league in run blocking.

ALSO ON BUZZCHOMP: Checking In On Movie Trailer Season

There have been some positives. Paul Perkins has shown glimpses of his big-play ability. Orleans Darkwa proved himself a serviceable rotation back. Veteran Bobby Rainey has filled in relatively well for the departed Vereen. No one has been good enough to prop up the rushing unit at large though.

However good the top three wide receivers look, the rest of the pass catchers look that bad. Outside of Odell Beckham, Victor Cruz and Sterling Shepard, no one has even 150 yards on the year. The depth at the wide receiver position has been nonexistent. And the tight ends have been a disaster. Fans thought (hoped) that a combination of Larry Donnell and Will Tye could form one competent tight end, but it hasn’t happened. The top three have been great. Beckham is peerless; Shepard is amazing for a rookie, and it is great to see Cruz back on the field contributing. There needs to be more options here though.

We’ve already covered the offensive line’s ineptness on running plays. The group actually grades out pretty well on passing downs, but having such a low sack rate allowed is actually more thanks to Eli Manning and the style of the offense. Throws are out of Manning’s hand so quickly these days, no pass rusher has enough time to get back there. Manning also has been quick to bail on a play and throw the ball away. That’s good news for his health and “living for another down,” though it lessens the effectiveness of the offense when routes aren’t given time to develop.

It is hard to grade the defensive front seven accurately, because it has been both exceptional and disappointing. The defensive line specifically grades out horribly against both the run and the pass, but watching the games, the full defense does a good job of preventing opponents from moving the ball. It just doesn’t collect evidence of this. There have been so few sacks it’s scary. Forced turnovers have been few and far between. Yet New York allows just 3.6 yards per carry, sixth-best in the NFL. And it has a top 10 scoring defense. Go figure.

The secondary has been equally as perplexing, but also had to overcome a rash of injuries. The starting safety opposite Landon Collins has already rotated through three different people. Seemingly every cornerback on the roster not named Jenkins has also suffered an ailment. Yet the healthy group has played very well outside of the lack of turnovers forced. It’s why the Giants could be near the bottom of all kinds of lists and still have the ninth-best defense in football.

Josh Brown was really good at his job. Josh Brown no longer has a job.

The other special teams units for New York are fine, but don’t really affect games. The team seems to punt too often when it should go for it. Dwayne Harris has the ability to make big plays but hasn’t, whether because of opportunity or injury or both. Brown had to be jettisoned, but hopefully the special teams don’t tail off because of it.