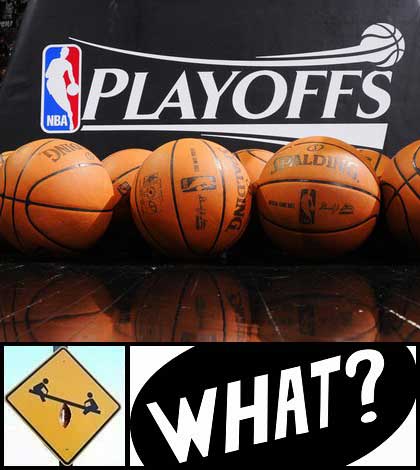 The NBA Playoffs are heating up and we have a sports quote rebuttal. “They said what?” sports quote game is all basketball. Which NBA star made this quote famous?

After one and half rounds, Dan is ahead 2 points to Todd’s 1 point. Oh yeah!
Now for more of round two. “They said what?”

We’re keeping things about basketball as the NBA playoffs heat up, but don’t be fooled. That is by no means a free hint. Here’s your quote:

“As far as carrying the torch for the years to come, I don’t know. I just want to be the best basketball player I can be.”

Hint one: The individual was drafted by a different team than he starred on.

Hint two: This person is a Slam Dunk Contest champion.

Hint three: He would most certainly be surprised he ever said this quote, and was not well liked. (A two-for-one!)

Let me see. Not very many stars have ever won the Slam Dunk Contest, especially recently. Ever since the early 2000s, the contest have devolved into a competition between up-and-coming names trying to break onto the scene. That limits the player pool just a bit since players like Gerald Green or older winners like Brent Barry or Isaiah Rider aren’t even popular enough to be disliked.

Because of that, I’m going out on a limb a bit with my guess and taking someone who I’m not positive ever won the dunk contest. They fit the other criteria too well to pass up though. That’s why my guess is Kobe Bryant.

First, the quote sounds like something a youngish Bryant or an older curmudgeon Bryant might utter. Also, he was not drafted by the Los Angeles Lakers but instead was traded there from Charlotte for Vlade Divac I believe. And lastly, it would be a surprise that he said such a thing because he carried the torch for a long, long time as the face of LA and arguably of the NBA as a whole. Oh also, lots of people dislike him!

Lots of star players won the dunk contest in the 90’s and early 2000’s, but your reasoning was sound all the same.

It seems my little extra hint was too much. Kobe Bryant is correct. Well played Sir.

More sports: Guess this basketball quote from Monday’s round