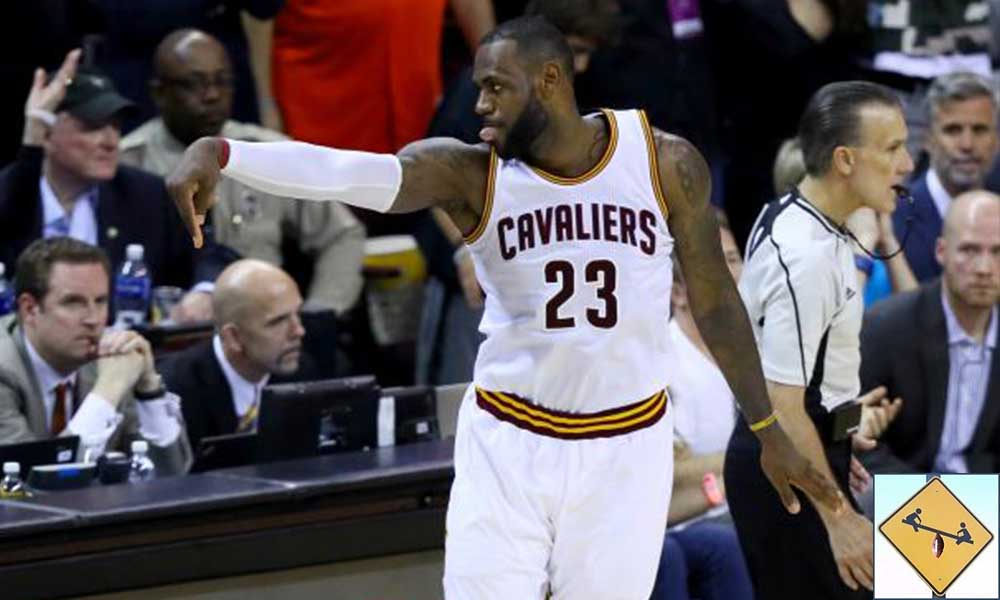 The loser of the NBA Finals Game 7 is in for a giant slap in the face. These storylines are so polar opposite its comical. LeBron James and Stephen Curry have weaved a masterpiece.

These NBA Finals haven’t transpired at all how I was expecting. When the Golden State Warriors were up three games to one, I assumed the series was over. I went straight to wondering where the Warriors would rank in the history of the league after winning 73 regular-season games and then the championship. Now, less than a week later, we have so many more storylines to consider.

In Game 5, Golden State played without the suspended Draymond Green, and the lack of its best defender showed. In Game 6, the Cleveland Cavaliers were back at home and took advantage. LeBron James showed why he is still the best player in the league to force a seventh game.

ALSO ON BUZZCHOMP: Hound Murders Mountain on Game of Thrones

With this comeback, if Cleveland won the NBA title, it would be more remarkable than I can explain. First is the comeback itself: down 3-1 heading on the road for games five and seven. Then there is who the comeback came against. And finally there is what the title would mean to the city of Cleveland, who hasn’t won the championship in a generation. It would be the latest amazing accomplishment in the career of James, like he needs anything else to defend his place in history as one of the 10 greatest players of all time.

But now I am more interested with the impacts of losses in these finals. I had been under the impression that if the Cavaliers lost (in five games, like I assumed) then major changes would be afoot. The team meshed well enough to make it all the way to the finals, but that isn’t good enough for LeBron and this team. I’m not sure if the same panic changes are pending if the team loses in seven games after this effort…although Kevin Love certainly has not been a part of this rally. It seems like Love could be gone win or lose for Cleveland. Do you see anything else major in play if Cleveland falls? I had previously thought Kyrie Irving could be on the chopping block as well, but two more wins changed my opinion of that, even though I’m still not a huge fan of his game.

As for the Warriors, what if they lose? We discussed a similar possibility last round against the Oklahoma City Thunder when GS was down 3-1. But that was in terms of the team’s lasting impact on history if they didn’t close the deal with a ring. But what if they lose in seven games in the finals now instead? That would obviously be demoralizing. It would also bring up major questions in my mind. Where would the team go from there, crapping away a two-game lead heading back home? It is already going to lose some pieces to free agency, but would this loss mean a change in style is in order? It’s hard to think an overreaction to one series loss warrants a complete overhaul, but this wouldn’t be any series loss. This would be the biggest series loss possible.

The game seven storylines are exploding from all angles, but none are more intriguing than the implications of a loss for both teams. I’d first like to correct a statement you made, however. LeBron James is not defending his place as one of the 10 greatest players of all time. James is solidifying his place as one of the two greatest players of all time. Its LeBron and Michael Jordan. The order was not up for interpretation until recently, but if James wins another title with a different team, coming back the way they have against Golden State, then I’m willing to debate whether Jordan or LeBron is number one.

As for the loser of this series, they will be remembered in history one way or another. I’ll start with Golden State, who managed to grab the hearts of the nation and get them on their side, only to completely destroy that same goodwill and turn the nation against them. I loved how the Warriors set the regular season wins record. I loved how they came back to down the OKC Thunder and return to the Finals. But after the kicking and suspensions, the streaky play and the appearance of constant whining by the players and fans, I no longer like this team. I do not want them to win. Screw a back to back. LeBron is now the hero and Curry and his cronies are the villains. Without a title to cap this season, Golden State will be remembered as the least liked team to win the most games in a season, only to blow a chance at a second title and immortality. LeBron will have stolen it from them. Long live the king.

If the Cavaliers lose this series, it will not hurt their perception in the least. Cleveland made the comeback, but it will have fallen short. They proved themselves equal to the all mighty Warriors, despite falling short of raising the championship trophy. James will have failed to regain his place as king of the league, but Curry has owned that title for some time now and no one will fault Cleveland for nearly winning it all, but not.

No matter who wins, I do think the exodus from both teams will transpire. Golden State is not holding onto its players. The comeback by Cleveland made it obvious that this is not as tight nit a team as everyone assumed. The players have their championship and now its time to get their money. Other teams will throw it at them and I’m not sure Golden State will throw it back. Cleveland will likely ‘allow’ Kevin Love to move on. He doesn’t feel like a great fit on this team. Irving is great on this team, however. Love leaves for someone who adds defense to compliment what Kyrie is lacking in that department.