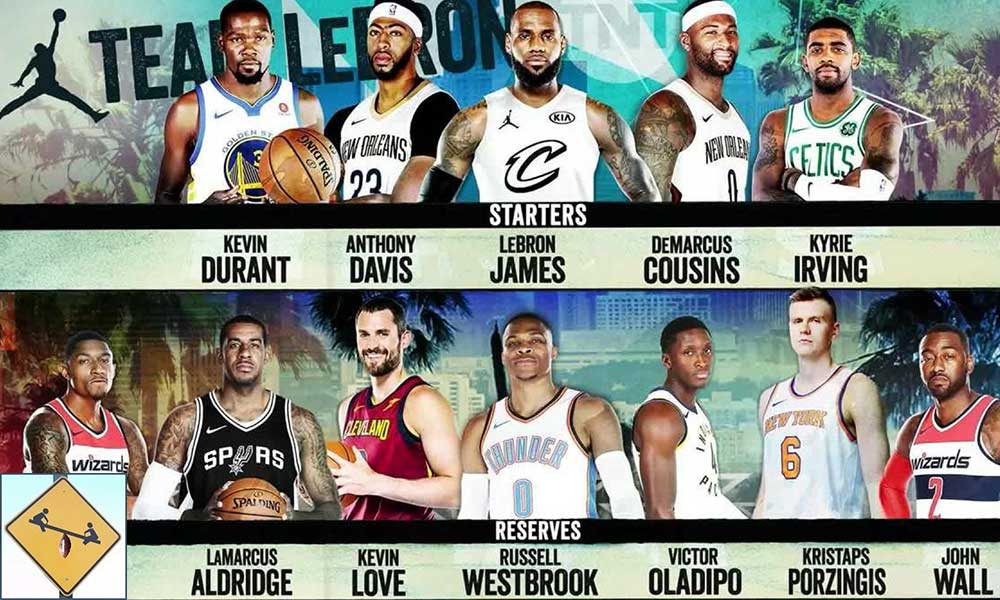 LeBron James picked a wicked cool team for the NBA All-star Game 2018. Unfortunately his team got ruined and the NBA picked his injury replacements. Trash a good idea why don’t you?

As the NBA all-star game rosters begin to take final form, we are left wondering how the rosters were selected in the first place. This past week, three all-stars were officially replaced because of injury. All three happened to be on Team LeBron.

I don’t like how the injury replacements are occurring, for one. LeBron has no say in which players he is getting. They are chosen by the commissioner. That means a full 33% of James’ own roster was not selected by him, and it’s actually higher if you consider that he is on the team and didn’t choose himself! But with three injury replacements assigned to him and being given the last pick of whichever player was left for last, four of his guys are not his guys at all.

This would seem to run up against whatever point the hidden draft actually served. James chose Anthony Davis and paired him with DeMarcus Cousins, or vice versa. Then Cousins went down, and the league gave him Paul George instead. George is great, but not quite a second tower in a twin towers situation.

The draft in its entirety seemed to lack any and all excitement through the choices James (and Curry, I suppose) made. LeBron chose Kevin Durant – probably first overall – so he wouldn’t have to play against him. He chose Kyrie Irving for the same reason. He then chose Russell Westbrook so Durant and Westbrook wouldn’t be battling. I don’t know what the goal was here – supposedly to win the all-star game, but I’m dubious – but building excitement was not attained. Could these rosters have turned out any less fun??

The other events during all-star weekend announced their lineups. Dennis Smith and Aaron Gordon could make for a great slam dunk contest. With Klay Thompson, Bradley Beal, and Devin Booker, the three-point contest should be stellar as well. As always, the skills weekend will rule the day, and the actual all-star game probably won’t amount to a hill of beans, regardless of who was playing with whom. But it still leaves me frustrated with how this entire drafting played out.

I’m a bit torn up regarding how to feel about the NBA All-Star game lineups. On one hand, the All-star draft was not televised, so fans had no insight into the ‘picking’ in the first place. Who cares if LeBron’s team gets changed? There are always injury replacements and we can only assume how James attempted to build his team in the first place. The only witnesses were James and Curry and some NBA officials.

On the flip side, this stinks! Gripes regarding the execution of the ‘draft’ are obvious and have been overstated. We all would have loved to watch James and Curry pick teams. Based upon their lineups, we can deduce how each attempted to build a roster. Yet injuries were always going to change things. Unfortunately for team LeBron, his team took the brunt of it. He probably knew about a few of these injuries in advance of the draft itself, but that is beside the point. Why can’t he choose his own replacements in the starting lineup? How come the NBA is being so gosh darn controlling and secretive?

That last question was legitimate sarcasm, because the NBA has ALWAYS been controlling and secretive. From telling players how to wear their jerseys, which don’t offer much in the way of options mind you, to keeping bad rules and changing good ones, the NBA is not known for its logic or reason. What they were known for was fun. Despite a lack of competition at the top, professional basketball has remained fun because there are so many great players. Its fun to watch Blake Griffin play basketball, even if his team is only slightly above average. Yet everything about how the NBA All-star game rosters were constructed has thrown poo in the face of fun.

It was fun to let James and Curry draft teams… only if we got to watch them do it. It was fun to deduce how they built their squads… only if they actually go to play with those lineups. Mixing up the all-stars between the conferences is a good idea, if executed properly. What exactly are we left with this year? It’s not James’ team versus Curry’s team, because injuries happen and will continue to up until the all-star break. It’s not East versus West. We don’t have Big versus Small. It’s just two groups of guys playing basketball with nothing at stake. This is somehow worse, even though it should not have been.