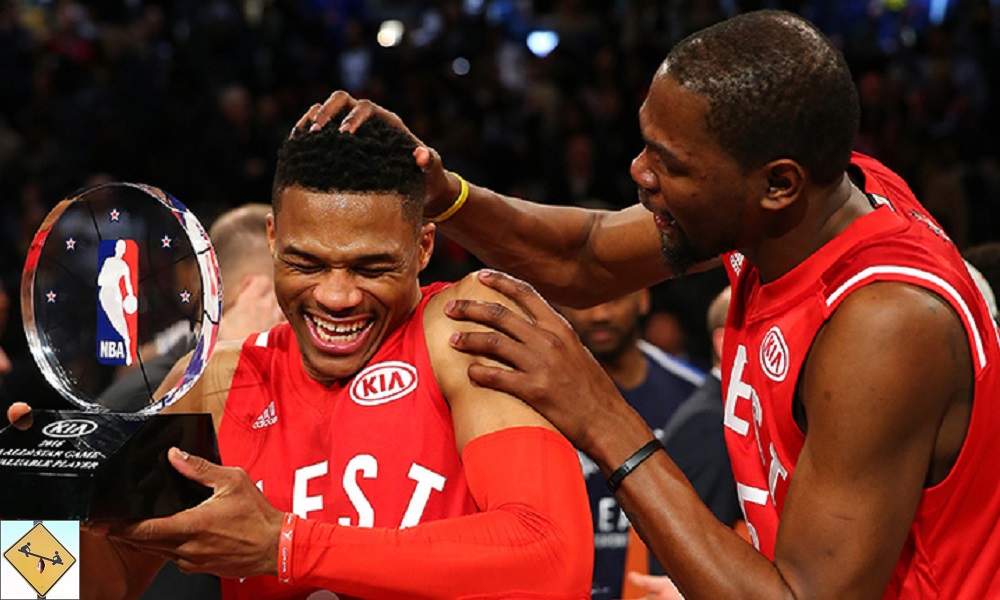 NBA All-Star 2017 weekend needs some fire. Will the Kevin Durant and Russell Westbrook drama top the excitement of our Dunk Contest and Three Point competition? Let’s hope so!

This weekend is NBA All-Star 2017 weekend in New Orleans! The skills competition, slam-dunk contest and three-point shootout take place on Saturday, with the game being played on Sunday. The game normally offers little in terms of interest, but this year might be an exception.

Before we get to that, give me your picks to win the big contests: the slam dunk and three-point contest. As has always been the case in recent years, the slam-dunk contest is pitting relatively unknown players against each other. None of the biggest stars in the league want to do this thing. Even our slam dunk star, Zach LaVine, backed out of the contest this year before going down with an ACL injury. He got too big for it apparently.

ALSO ON BUZZCHOMP: Which Player/Coach Rules the Sports Mount Rushmore?

Jones is getting lots of buzz for this weekend, but he is essentially a non-player in the NBA. That obviously doesn’t matter in terms of leaping ability and winning the dunk contest, but it certainly makes his inclusion less fun.

My pick to take this title is Gordon. He was flat-out robbed last year. The fans know it; the judges know it; he knows it. I think he could have something super fun in store, and besides, he’s a ridiculous dunker. This is his thing to lose.

In the three-point contest, it was the fans who were robbed this year. Defending champion Klay Thompson is back, but none of his Golden State teammates are competing against him. I wanted to see both Steph Curry and Kevin Durant in this. We do have an elite group of stars in this contest, though.

Kyle Lowry, Kyrie Irving, C.J. McCollum and Kemba Walker are some of the best guards and shooters in the NBA. Eric Gordon is having an elite season in his own right. Rounding out the competitors are a few long shots in Wesley Matthews and Nick Young. At least, they should be long shots on the surface. Dig deeper and you remember that Matthews was a great shooter just a couple of years ago. And somehow, Young is putting up one of the more impressive shooting seasons in the league. He shoots far more threes than twos and is still 14th in the NBA in three-point shooting.

This is kind of a shot in the dark. I don’t know how to handicap these, but give me Kyrie. He likes to rise to the occasion and always thinks he’s the best player on the court. On Saturday, he will be.

As for Sunday’s game, it is going to be a slog of dunks until the very end. The only piece of interest stems from Durant and Russell Westbrook being on the same team. Does Steve Kerr play them together? If so, do they refuse to give each other the ball? Do they bury the hatchet and throw alley oops back and forth? Anything is in play. Most likely, this is a non-story, and they just play basketball. But there is the inkling of a possibility that something sneaky, snarky, or memorable comes of this. If not, the game is going to be completely forgettable.

Great At Home Treadmill – Buy it NOW on Amazon!

NBA All-star 2017 weekend needs more drama. I truly hope Durant and Westbrook are on the floor together and rekindle a bit of their old magic. But with Kerr making the decisions, our chances of any real fireworks go out the window. How about on the Eastern conference roster? Maybe Carmelo Anthony actually playing with Irving or LeBron James gets him to officially waive the no-trade clause. If I were Melo, actually playing with other star players, no matter who they are, would remind me how bad my own team is. I’d love him to go old-school for a spell, steal the show and then pull aside the sideline reporter proclaiming to the world “I’m leaving New York. There’s no place like home.” Don’t quote him on that one. Home is a relative term.

If excitement for the actual All-star game only lives in fairy tales and my strange sense of humor, then Saturday night’s action is where it’s at. I wish the Skills Competition was a little bit cooler, because the list of names competing is pretty fricking sweet. Every young star will be showing off their skills, from Kristaps Porzingis to the new Isaiah Thomas and John Wall. Anthony Davis and DeMarcus Cousins and Gordon Hayward and Devin Booker, with Nikola Jokic the injury replacement for Joel Embiid. I love this lineup, but I don’t love the actual competition. The Three Point Contest and Slam Dunk Competition are where it’s at.

Its going to be a monumental task for anyone to unseat Klay Thompson as the reigning Three Point Contest champion. Kyrie Irving may have the goods, but I don’t see him taking down the defending champ. Only one of our sleepers has a real chance. My pick is Thompson to win, but if he falls short then I like Nick Young of the Los Angeles Lakers to put a small gold star on his team’s forgettable season. Remember the Lakers? The team that once dominated the NBA? Not this year.


As for our Slam Dunk Competition, I’m a bit disappointed that only four players get to compete. I like the new format, but four is not enough. I suppose with so many guys not wanting to participate, it may have been a stretch to pull in more names. My money is on DeAndre Jordan to win this thing. He is having one of his best seasons ever and can be a dunk machine. Plus he has to be the fan favorite, hailing from the Los Angeles Clippers and the only center of the bunch. Maybe Gordon claims the title after falling short last season, but this feels like Jordan’s crown to lose.

BuzzChomp is an affiliate for products and services recommended herein. Please read our FULL DISCLAIMER for further information on affiliate programs and opportunities.