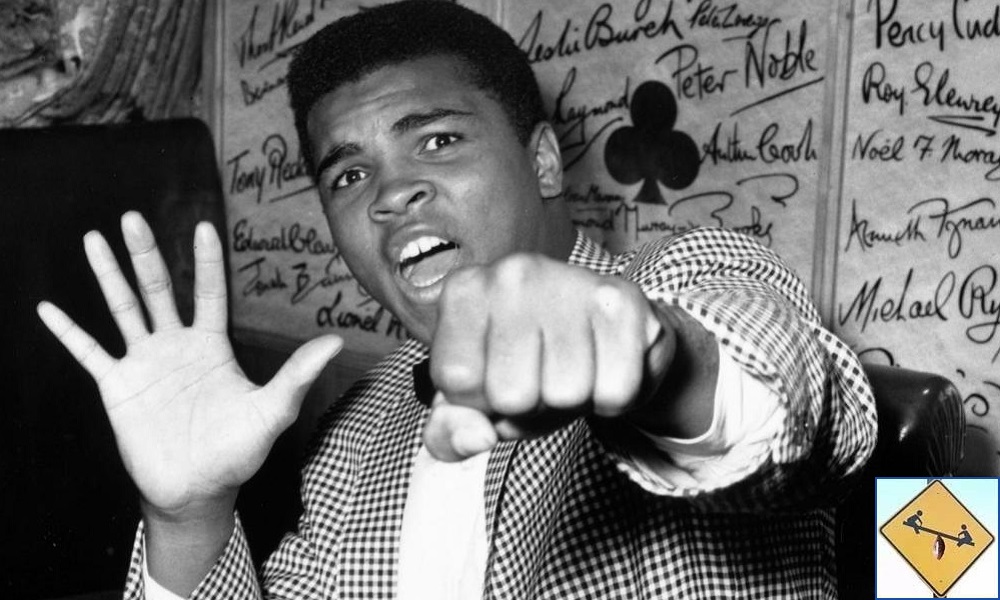 In honor of the greatest of all time, we’re throwing a Muhammad Ali Quotes Game. Of the five quotes below, which was NOT said by Ali himself? Dare to play. Dare to be great.

Muhammad Ali, the former heavyweight champion of the world and Olympic gold medalist, died this past weekend. It wasn’t a surprise death based on Ali’s health, but it hit the sports world hard. With his combination of wit, bravado, fun and bite, Ali was perhaps the best quote in sports history. Maybe he was second only to Yogi Berra in terms of lasting impact of what he said.

When Berra died late last year, we played a fun They Said What? game honoring his memory: pick the non-Yogi quote out of the bunch. Let’s do the same thing with Ali now, who was always known for his lip and trash talking. I’ll give you five quotes to choose from. Four were uttered by Ali; you have to pick the one that was not.

Quote 2: “If you even dream of beating me you’d better wake up and apologize.”

Quote 4: “If you sign to fight me, you need speed and endurance but what you need most is to increase your insurance.”

Quote 5: “I’m the biggest fighter in the history of the sport. If you don’t believe it, check the cash register.”

I wanted to keep going because these are so fantastic, but this is enough to hopefully fool you. Oh, what the hell. Here’s one more (which was indeed an Ali original).

Bonus: “I’ve wrestled with alligators. I’ve tussled with a whale. I done handcuffed lightning and throw thunder in jail. You know I’m bad. Just last week, I murdered a rock, injured a stone, hospitalized a brick. I’m so mean, I make medicine sick.”

That last bonus quote is priceless and vintage Ali. The other five quotes are a tricky mix of bravado and outright egotism. Ali was known for both, but it always had to do with his abilities and his stature as the greatest of all time. One thing I don’t believe Ali ever did was brag about money.

The first quote speaks directly to Ali’s position as the greatest, as does the second quote. I could see quote two belonging to someone else, but it’s also very much in Ali’s wheelhouse.

Quote four feels a little cheesy for Ali, but it’s also the bragging we are used to hearing from him. The only two statements that feel against type for Ali are number three and number five.

Quote three is very matter of fact and perhaps something Ali said later in his life. It’s not the traditional bravado we’re used to, but it’s not as out of place as the fifth and final quote. While its true that Ali was the greatest fighter, I doubt he would have called himself the biggest. I also don’t think he would have questioned one’s belief in the statement, nor pointed to money as a way to prove it. That quote feels like Mike Tyson.

Wow, that was an impressive bit of sleuthing and deduction you pulled off. The reasoning behind each quote and selection was perfect down to a tee. If that wasn’t bad enough, if you didn’t embarrass me enough by getting the pick correct, you also pulled out the correct speaker for the quote that was out of place. It was indeed Mike Tyson who uttered the non-Ali quote. I’ll be over here in the corner now if anyone needs me.