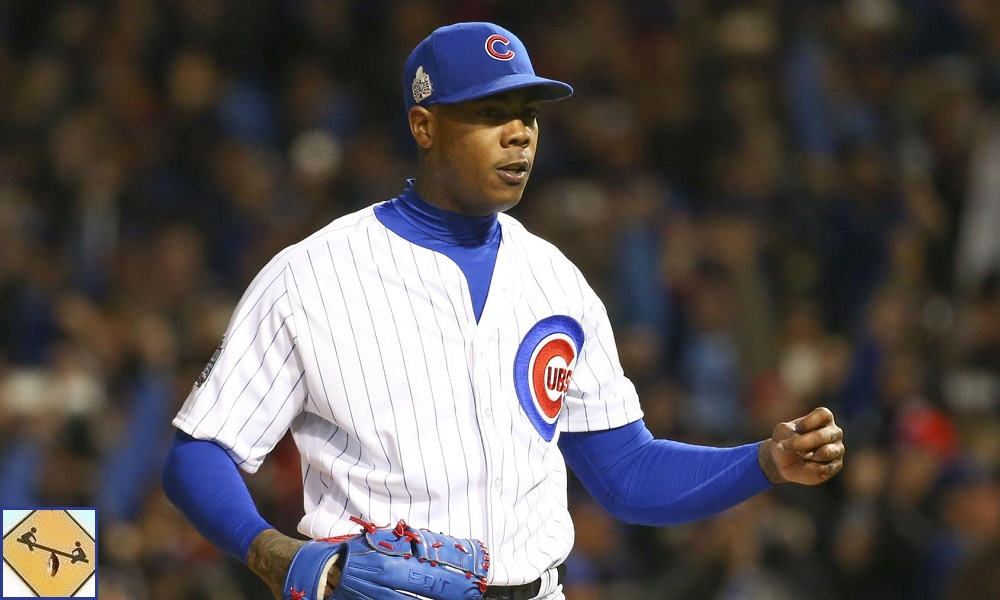 One thing has defined the MLB Playoffs and World Series, closing pitchers. It’s officially the year of the closer, as Aroldis Chapman and Andrew Miller lead the Cubs and Indians to victory. MLB World Series 2016.

Heading back to Cleveland for game six of the World Series, the Indians hold a 3-2 series edge over the Chicago Cubs. There have been a number of fascinating managerial moves already in this series, putting the expertise of Joe Maddon and Terry Francona on the line and on display. These are widely regarded as two of the best managers in the sport, and we have seen why. There have been numerous occasions where I openly disagreed with a major decision being made, only to have the move work out in Maddon’s or Francona’s favor. That doesn’t necessarily mean the move was correct; right moves can go wrong just as wrong moves can work out well. But in these cases, perhaps they were actually the right moves to make.

Most of my grievances had to do with bullpen usage, as is usually the case with fans and managers. In the 2016 playoffs, bullpens have seemingly been used more than ever, which just heightens the impact of the decisions.

In game three, Francona pulled Josh Tomlin in the middle of the fifth inning, replacing him with Andrew Miller. Tomlin had been amazing, but Miller had been the best player in the postseason to this point. However, my concern was not with using Miller; it was with what using Miller then would mean later. For one, there would be no off-day between games three, four and five, meaning Cleveland would be forced to use Miller three straight days for (probably) multiple innings each outing. This would seem to be quite a workload, even for the World Series. Thus, holding Miller back from what appeared at the time as being a possible three-inning outing in game three would be vital. And if Miller was pulled earlier than a direct hand-off to Cody Allen (which he was), then my thought process was that whoever pitched that middle inning would surely be worse than how Tomlin looked right now. Thus, leave Tomlin in, bring Miller in later, and have the Tomlin-Miller-Allen trifecta win the game.

Instead, Bryan Shaw was used after Miller was pulled, and he got the job done, though allowed two hits in 1.2 innings. Francona was right, including the obvious decision to pinch hit for Miller, something the announcers seemed less sure of at the time.

In game four, Francona again had some bullpen decisions that I disagreed with: namely, throwing Miller two innings when his team was up 7-1. Isn’t this the only time when it’s okay and worthwhile to use someone other than Miller? Again, with no off day between games four and five, saving Miller for possibly two or three innings in game five would be much better than using him in a six-run game. I guess it worked out fine, but perhaps only because Miller wasn’t needed in game five since the Indians were behind and lost. At least he used Dan Otero in the ninth and not Allen again.

Maddon took over quizzical decision-making in game five. He brought in Aroldis Chapman in the seventh inning. At the time, I thought he was pulling the perfect Francona copy: using Chapman in the most heated situation and leaving the ninth inning for someone else. Instead, Maddon was simply putting everything on Chapman’s plate. He had him throw 2.2 innings, the longest outing of his career, throwing 42 pitches and even getting a plate appearance. It was kind of odd, but again, worked out for the manager.

Has anything stuck out to you during this World Series to give you a key on how the rest of the series will play out? At least we have the National League lineup decisions in our rearview mirror. No more deciding what clear DH has to play the field or sit the pine. Kyle Schwarber will be back in the lineup, and Carlos Santana can put his gloves away. Even Maddon has to be relieved about a return to Cleveland for that reason.

To sum things up rather simply, this World Series is the fitting conclusion to the year of the closer in baseball. Closing pitchers, those special players who do one or two things better than anyone else in the sport, have proven themselves the most valuable commodity in all of baseball.

We technically knew this to be true, as Mariano Rivera helped the Yankees dominate for so many seasons. Yet up until this postseason, it still felt like starting pitching won championships. The closing pitcher finished things off, but it was the starters who went the distance, shutting down the strong lineups of their opponents. That is no longer a true statement, made clear by Francona and Maddon working their best players, their best pitchers, their closing pitchers as much as physically possible. And its working!

The 2016 MLB trade deadline was headlined by closing pitchers, namely the two former New York Yankees who are now winning games for the Cleveland Indians and Chicago Cubs respectively. The 2016 MLB playoffs have been headlined by those same two pitchers and they are explicitly determining the outcome of this World Series. Chapman won game 5 for the Cubs. Miller won game 3 for the Indians. The World Series will be decided by these two former Yankees, the best two pitchers in baseball right now. The World Series will be decided by the closer.

NBA Predictions: Who wins Finals that can’t include Cavs and Warriors?


A day of rest on Halloween evens up the playing field, because Chapman threw a lot of pitches in his game 5 victory for Chicago. Yet its Andrew Miller who is most rested. Will it be Miller who once again is asked to pitch half a game for his Indians? Will game 6 be all tied up and both Chapman and Miller called in to win it for their teams? The return of added offense in an American League ballpark would have otherwise been a factor, if not for these two closing pitchers. One of them is winning the MVP award. We just don’t know which player until it’s all over.