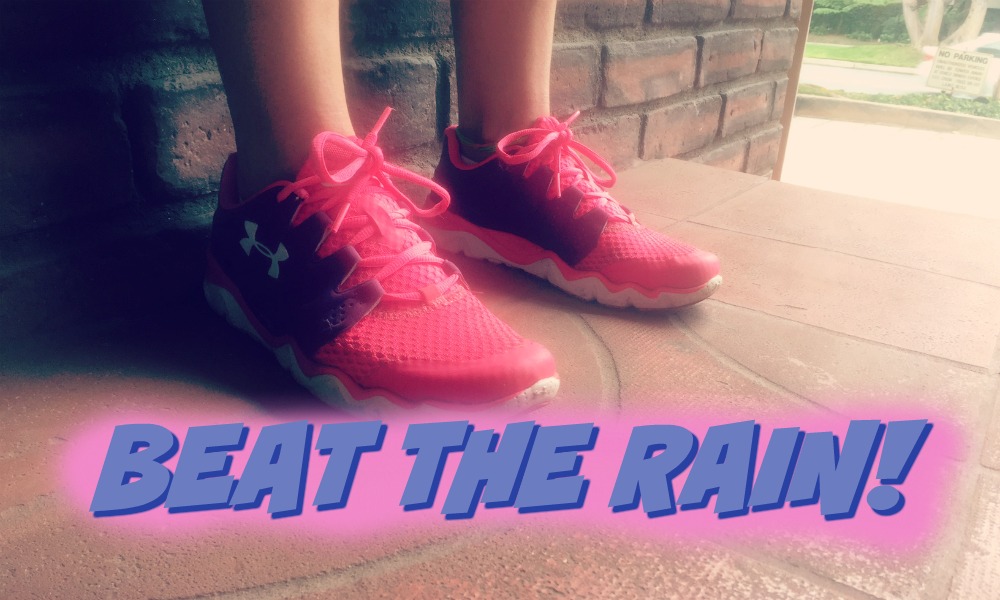 Fall and Winter bring rain and then snow, but I live in Southern California where such weather is usually non-existent. In the last two weeks it’s rained four times in Los Angeles! I’ve been lucky to beat out the rain while running!

There is something wonderful about waking up early and hearing the rain pound down on your roof. It does however make me want to reset my alarm and stay in bed. I’m not a big “running in the rain” girl. I have a true appreciation for the rain, especially since I don’t experience it much anymore. But I don’t need to get soaked on my run.

More often than not in Los Angeles, I wake up and it looks like rain. The sky is grey and overcast, or there are foreboding clouds on the horizon. But rarely does that equate to actual rainfall, so if it’s not raining then you bet that I’m grabbing my running sneakers and heading out for a run. Every once in a while I get caught in an actual storm. I just didn’t time my run well and I chalk that up to what the universe wanted for me that day. I always finish my run regardless and I normally run a lot faster, which is a score for my workout. But so far this year I’ve been beating out the rain!

ALSO ON BUZZCHOMP: Change Your Running Scenery This Week!

Last week I woke up to no rain, but by the look and smell outside I knew the rain was coming. I really wanted to get my run in, so I did. I went outside and powered through my route, questioning a few times whether I’d make it in before the rain. Regardless, I knew that I was finishing my run. If it really started to pour, then I’d cut things short and eliminate my cool down, but I didn’t need to. No rain! Score! I was able to keep my cool down and have a nice walk back home. I always stretch outside before I go in and I was even able to do that. Yet the moment I went to open my door, I heard a downpour of rain. I looked behind me and it was now pouring. I beat the rain!

I love that this happened. I had a goal in mind for the day and my goal didn’t include running later in the afternoon, or just going to the gym instead of running outside. I met my goal! While I really have no control over the rain, I do have control of how I react to it. Even though there have been times when I’ve gotten caught in the rain, I just continue on my course. That’s all we can do!

If I lived in an area that got rain more frequently, I would definitely invest in a good rain jacket to run in. But it does seem a little silly to invest in that, when we haven’t had a rainy year in Los Angeles yet. Maybe this is our year of rain. If it is, then I will need to embrace beating the rain differently, by enjoying a nice run in the rain!


Whenever it looks like rain or rain is in the forecast, I’m normally the only one running outside. I always think this is so silly, because otherwise I always see people running in the morning! I’m so glad I have those moments of beating the rain and don’t let the thought of rain take me away from a run!