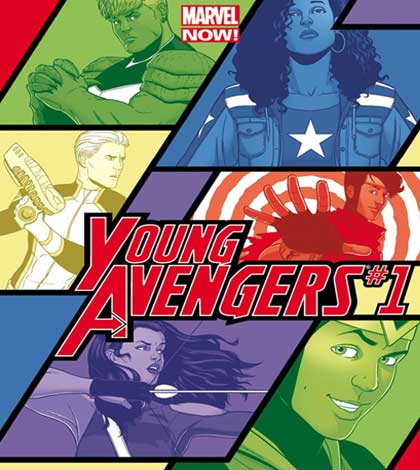 Last week I talked a bit about DC’s New 52 initiative, which rebooted its entire universe to make it easier to jump into a title. Hey, it’s all new!

But flying from Metropolis and into New York City, you’ll find that Marvel is taking a different approach to the same problem: hooking in new readers. Marvel has always prided itself on not having to start over (which DC has done to its continuity at least three times). Instead, the company just tries to freshen things up. Under Chief Creative Officer Joe Quesada, Marvel has gathered some of the finest creators it could find, combined them in interesting ways and basically asked them, “what would you do with Marvel NOW?”

And the answer is… Marvel NOW! (Hmmm… deja vu!)

After a series of world-shattering events, old alliances are torn asunder, heroes find themselves with a new sense of purpose, and some just find themselves as new heroes. So if you walk into a comics shop for the first time after watching The Avengers movie, you can find something easily accessible that’s still dynamite reading.

Last week you would found Uncanny Avengers, in which Captain America gathers some of your favorite heroes that have mostly been in movies to confront the Red Skull. This week you’ll find Marvel with an even bolder variation — Young Avengers by Kieron Gillen and Jamie McKelvie, two hot British creators who have been gaining critical acclaim for their series Phonogram.

Young Avengers is almost exactly what it sounds like, gathering teen heroes with connections to adult superheroes like …Loki? Wait a minute… Loki, the villain of the great Marvel films Thor and The Avengers?

Yes. He’s a teen and hero might be too strong a word, but it all makes sense. At least, the clever part about this is that it might drive the more intrigued reader into picking up the backstory, available in three trade paperbacks under the umbrella title Journey Into Mystery. In one of those great world-shattering events, Loki sacrificed his life to save Asgard, but only after tricking Mephisto and Hel, two lords of the underworld, into relinquishing their claims on his soul.

That left older brother Thor free to rescue a young street urchin on Earth who turned out to be the reincarnation of Loki. Why did Loki do all this? Because he’s the God of Chaos, and since he became a villain, he’s predictable. And there’s no worse fate for a God of Chaos. So he became a teen boy — unpredictable, uncontrollable, and unsure of whether or not he wants to grow up again to be evil, or walk in the light like his brother.

It’s a great adventure with thought-provoking storytelling. So Young Avengers will be a good bet this week, and while you’re there, pick up those trades and see how we got to where Marvel is… NOW!

By Derek McCaw owner of FanboyPlanet.com