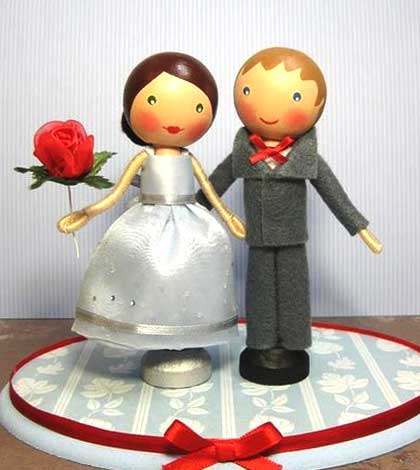 Traditional vows of commitment don’t necessitate a traditional relationship. The beauty of marriage “a la carte” is that you don’t have to follow yesterday’s rules. You needn’t take on the historic pattern of how it should look or how it should function.

Modern couples want their marriage to be “different.” They’re seeking a dynamic union within an established partnership model; one that has lost much of its luster over the last few decades.

“We’re not going to be like other people,” my friend said emphatically at her wedding. She and her husband are intent upon updating their version of marriage. “We don’t want the traditional roles or lifestyle. We want something that’s truly ours,” she stated as her husband nodded in approval.

They will not be moving to the suburbs. She will not be driving a Range Rover or become a soccer mom. They will invent their own version of marriage— one that resonates for both of them as being real and authentic. They will have a family in the future. How that family will conform to (or deviate from) conventional standards will be something they discover together.

Within this marriage are two independent and adventurous people. They both love life; exploring, traveling and being in each other’s company. They’ve lived and worked all over the world. Though the commitment they’ve made may look traditional from the outside, they will enact this partnership in a modern way.

The pressure to conform to society’s version of marriage is omnipresent. That’s why many couples shy away from this format. But marriage today needn’t replicate the past. We are free to create our own template.

As an evolving species, we are instinctively drawn toward advancement. We may use that imperative to eliminate what we don’t want, and add in those things we do want. While external pressures may be greater in that attempt, the knowledge that we can indeed have the life we want inside marriage, is liberating.

Both my friend and her husband are adjusting to this new dynamic. They want a big, rewarding life. Individually they have created this for themselves. Now, they’re working as a team. The combined force of their efforts allows the best of them to come forth, doubled in capacity.

This new twist on an old formula is freedom at its best. To allow for their desired growth, they will decide each step of the way to carve out that design. In doing so, they add dimension to the concept of “marriage.” That expansion liberates others to discover their own unique expression, within this archetype.

If, in looking at the existing marriages of this world we don’t see what we want, why not create anew what we do want? The beauty of our current time period is the ability to choose “a la carte.” We can design the relationship we want within an existing construct. The exterior shell may seem to be the same, but the interior components may be altered to our liking. There is no limitation to how we may do this. Marriage “a la carte” is a new frontier ready for exploration.