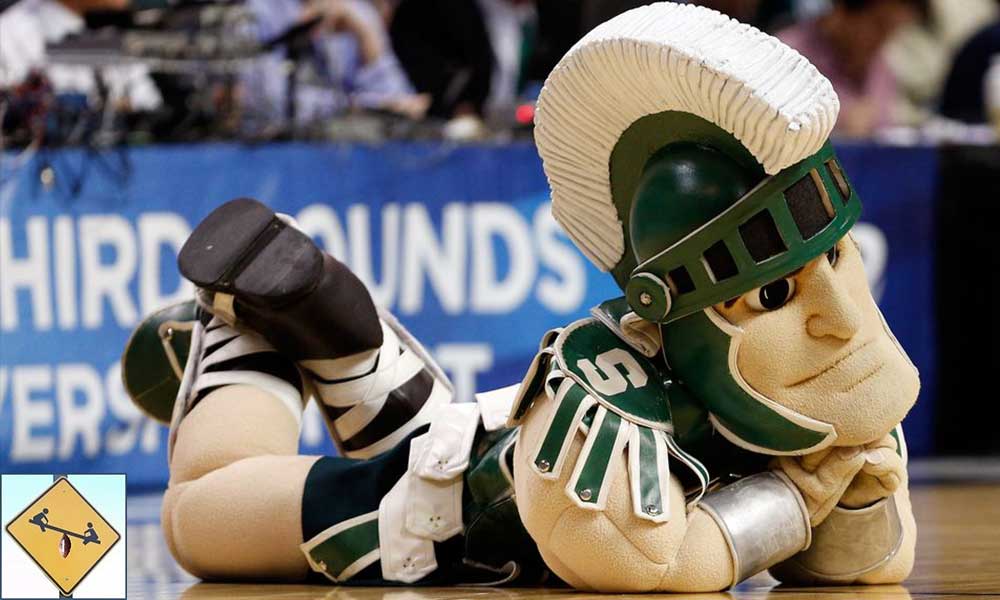 Michigan State was the biggest upset of March Madness 2016, but what REALLY happened to the Spartans? A completely legit breakdown of the collapse and what their mascot must have been thinking.

The biggest upset of March Madness 2016 remains at the feet of Middle Tennessee. The fifteen seed toppled two seed Michigan State, destroying 99.9% of tournament brackets worldwide. Busted! Since no team is topping Middle Tennessee’s accomplishment this year, let us revisit the madness.

Here we find a rare moment of celebration from a member of the Spartans, or at least I think he’s celebrating. Perhaps he’s counting how many points they need to catch up. Or flashing some unknown gang symbol reserved for underachieving teams who lose unexpectedly. You tell me, what the heck is happening here?

ALSO ON BUZZCHOMP: 2016 Name of the Year Bracket Breakdown

As a bonus, or simply to rub salt in the wound, what is the Spartan’s mascot thinking?
He’s definitely not getting laid after the game.

Denzel Valentine is celebrating for sure, but not for the Michigan State Spartans. At this point, he had already resigned himself to a first-round tournament exit via the historic upset you alluded to. Instead of wallowing away in self-pity though, Valentine moved on to rooting for his NCAA Tournament bracket. Why not if you can’t personally advance, right?

While he surely had Michigan State winning the Midwest, there were other regions to follow, and Valentine must have chosen Wichita State to make a nice run through the South region. At that point, the Shockers had already won their play-in game and were going to be advancing past round one. So Valentine threw up double shockers hand gestures to root on his South Regional team of choice. Unfortunately for Valentine and his March Madness pool, WSU didn’t last much longer than Sparty did. Better luck next year.

As for mascot Sparty, this is obviously a photo of him pondering his upcoming future. Where to go from here? A first-round exit at the hands of a 15 seed is hardly an experience to build off of. Unlike Valentine, Sparty is a more emotional yet introspective soul. He needed to lay down and really decide what he could do from here. Many mascots go on to have long, fulfilling lives after terrible bounces out of the Big Dance, but everyone reacts differently and needs varying amounts of time to move on.