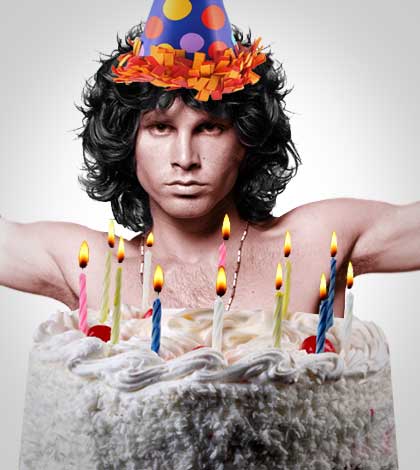 December 8th this year would have been Jim Morrison’s 69th birthday.

And as we take a look back and remember Jim and his music, it is hard not to see him exactly how he was. Long flowing locks of hair, leather trousers, microphone in hand, flailing about on-stage, with that demonic-yet, oh so cute-smirk that resembled a smile, or maybe an (evil twitch).

December 8th this year would have been Jim Morrison’s 69th birthday.

And as we take a look back and remember Jim and his music, it is hard not to see him exactly how he was. Long flowing locks of hair, leather trousers, microphone in hand, flailing about on-stage, with that demonic-yet, oh so cute-smirk that resembled a smile, or maybe an (evil twitch).

Other famous rock stars like Mick Jagger, Keith Richards and Brian May have all aged right in front of our eyes (just look at Brian May’s gray mane) if you haven’t seen it lately, locate a picture on-line it is truly a site to behold. (I still love ya Brian).

The truth is, taking a look at the folks of his era, Jim Morrison remains (in our minds eye) as young and vibrant as ever! It doesn’t hurt that he died (way too early) at the age of just 27, before he had a chance to grow old and ruin that so called ‘magic’ some rock stars manage to keep. I guess Jim was truly the personification of “…dying before he got old”.

Ya know, I believe that’s the way it should be… all my favorite artists died young; Janis, Jimi, Kurt, Bonham, Moon. It’s like… you make your mark… then, “Seacrest Out!” I wish I could say the same for other artists we’ve been left to bear, (but that’s fodder for another blog post).

So, let’s bow our heads and remember Jim Morrison for what he did for us and the business of Rock and Roll. He gave hope to all those geeked-out, poetry wonks sitting alone in their rooms writing, what appears to be nonsense, that their friends and parents say, “…will never amount to anything”!

Jim was a genius when it came to telling a story, weaving a tale and commanding attention (even when no-one wanted to listen). Jim Morrison never played an instrument, didn’t have one of the most polished voices in the business, he didn’t even have his stage craft perfected when he began, but as he grew (and his alcohol intake started to take effect) there was no other chap who would dare follow him once he left the stage. His antics (on stage and off) are the stuff of legend! Even the other members of The Doors, although happy with the eventual outcome, were often taken-a-back to see what Jim had up his sleeve night-after-night.

So, if you’re wondering how you might celebrate Jim’s birthday this year, here’s a thought…why not grab a bottle of your favorite libation, find a cozy spot (pick yourself the perfect moonlit night) and go ahead and recite the lyrics to your favorite Doors track, or maybe a poem of your own penning (that your folks said would “…never amount to anything”) and be glad there were men like Jim Morrison to show you how to really “feel”.

As for me, I’ll always remember him as the one rock star still among us who hasn’t aged, and still looks great in those leather pants! Happy Birthday Lizard King!

Note: Sill don’t have enough Doors music in your collection? 2012 saw the release of a new Doors track. “Breakin’ a Sweat” can be found below! Pick yourself up a copy and listen for the breakdown where Jim Morrison makes an appearance with a truly inspirational story that actually came true!