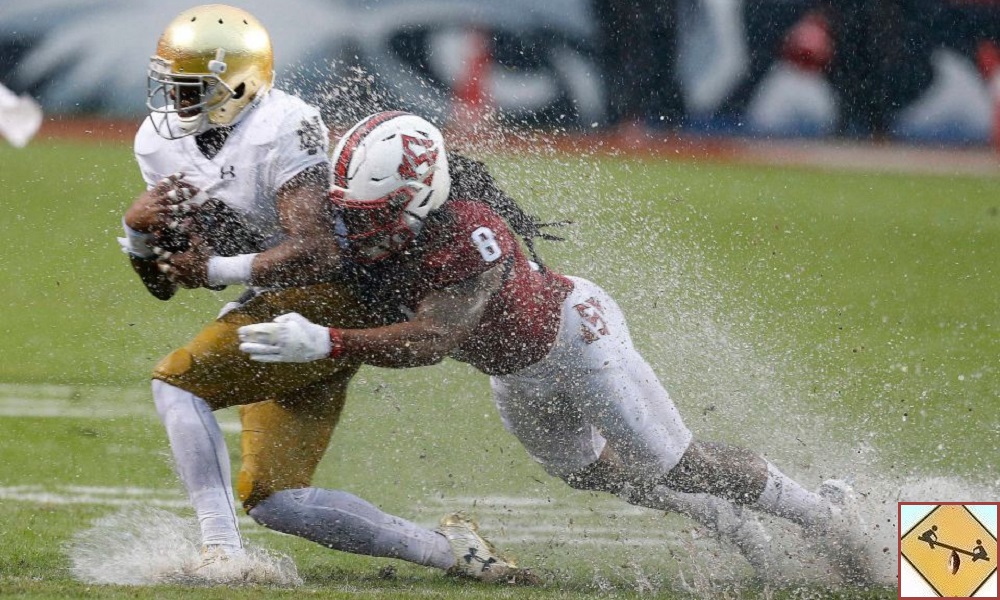 Hurricane Matthew destroyed more than homes. Its damage to the sports world continues, with the MLB Playoffs and College Football struggling to clean up.

Obviously hurricanes are bad. Obviously the repercussions from a storm of this magnitude on real life dwarf those that affect the world of sports. Obviously. Okay.

Hurricane Matthew really messed shit up in the world of sports this weekend. It was pretty fascinating to see how the altercations affected some really big games in college football and Major League Baseball.

On Saturday, the Dodgers-Nationals game in Washington D.C. was postponed. The teams played the game yesterday, had to travel to Los Angeles the same day, and now play game three of their series this afternoon. A short turnaround could impact both teams as neither team’s starter made it out of the fifth inning in game two. A total of 12 pitchers were used in the contest.

ALSO ON BUZZCHOMP: The Next Great TV Show Built Here!

Game three of the Indians-Red Sox series was also postponed, perhaps delaying a Boston elimination another day. The teams will play today with the same starting pitchers, but if the series extends past three games, the loss of an off day could impact moves. Also, of interest to fans at home, now all three playoff baseball games on Monday will see some television overlap.

In college football, the weekend was started with the cancellation of the LSU-Florida game. No neutral site could be found or agreed upon to simply move the game, but if the teams don’t come up with a day to play this one in the future, it could have a rather large impact on the SEC standings at the end of the season. Each team has division-title hopes that would be changed if it is short one game on the ledger.

Then there are the games that were actually played. Numerous games in the state of North Carolina played through driving rain, and it could have ruined a few teams’ seasons. Notre Dame may have been finished beforehand, but an ugly loss to NC State made sure of it. Preseason Heisman hopeful DeShone Kizer was 9-of-26 throwing the football as the Irish fell.

At North Carolina, the Tar Heels found similar struggles as they got demolished by Virginia Tech. Mitch Trubisky, who had a case as the best quarterback in the conference before the game, went 13 for 33 for 58 yards and two interceptions. The potent UNC passing attack could do nothing and VT pounded the ball 66 times on the ground for the blowout win. At 2-1 in the ACC, Carolina isn’t finished, but a home loss to a Top 25 team certainly does nothing to help the resume.

The Georgia-South Carolina game was also affected by the storm. The game was moved to Sunday, though the only downside seemed to be that absolutely no one cared that it was taking place on an NFL Sunday. It remains to be seen if the two coaching staffs were even paying attention or just following their fantasy teams like the rest of us. Georgia threw for 29 total yards…and won.

Major storms always cause fascinating changes to sporting events. These drastic weather occurrences seem to be hitting us more often, or maybe it’s just my imagination. Either way, if the Red Sox get eliminated and blame the hurricane, we can call it a silver-lining win.

Hurricane Matthew sucked on many levels, but its snowball effect on the sports world continues to damage both the MLB playoffs and college football. Perhaps the NFL’s Monday Night Football will remain unscathed, but that does little to lessen Matthew’s damage.

College football’s ACC conference was extremely strong and competitive, yet no longer looks anything like the powerhouse we saw just a week earlier. Notre Dame was already done, but by handing NC State a victory they vaulted an also-ran team up the ranks in the ACC Atlantic division. Clemson is still on top, but Louisville is far and away better than NC State, something lost in the current standings. In the Coastal division we now have definitive separation. Virginia Tech likely won things by annihilating UNC in another ugly game. The Tar Heels had made a statement, defeating FSU a week earlier. Now they made a different statement, one they certainly wish to take back.

The SEC is also getting confusing, with the cancellation of the LSU and Florida game. The Tigers are not going to win anything this season, but Florida is right behind Tennessee in the East division. Currently the teams have identical conference records, with the Gators having played one less game. Tennessee lost this past weekend and their luck might finally be evening out. But to deny Florida the opportunity to extend its conference record with a victory over LSU, or to remove itself from consideration with a loss, surely mucks things up. There is no way the Gators finish ahead of the Volunteers if both teams win out and Florida ends up playing one less football game.

College football’s damage will ultimately come down the road, but the MLB playoffs felt immediate repercussions. Postponing the Dodgers vs Nationals game certainly favored the home team on Sunday in Washington, but likely favors the home team again in Los Angeles later today. The Dodgers got to sleep at home last night, but sloppy baseball is in the forecast with both teams playing on very little rest. If anything, we now get at least one exciting division round series. But I expect the Red Sox and Indians matchup to heat up now too.


Boston caught a break when their game got postponed because of the hurricane. The Red Sox are at home and received an extra day to both cool Cleveland’s momentum, and erase the memory of games one and two. Boston has the firepower to win, but so far their pitching has been second to the Indians’. I don’t see the Red Sox and David Ortiz allowing elimination to happen at home. With extra rest they can steal back the momentum. Yet as you noted, if the hurricane is ultimately to blame for Boston’s elimination, we certainly get a silver lining to all of hurricane Matthew’s destruction.