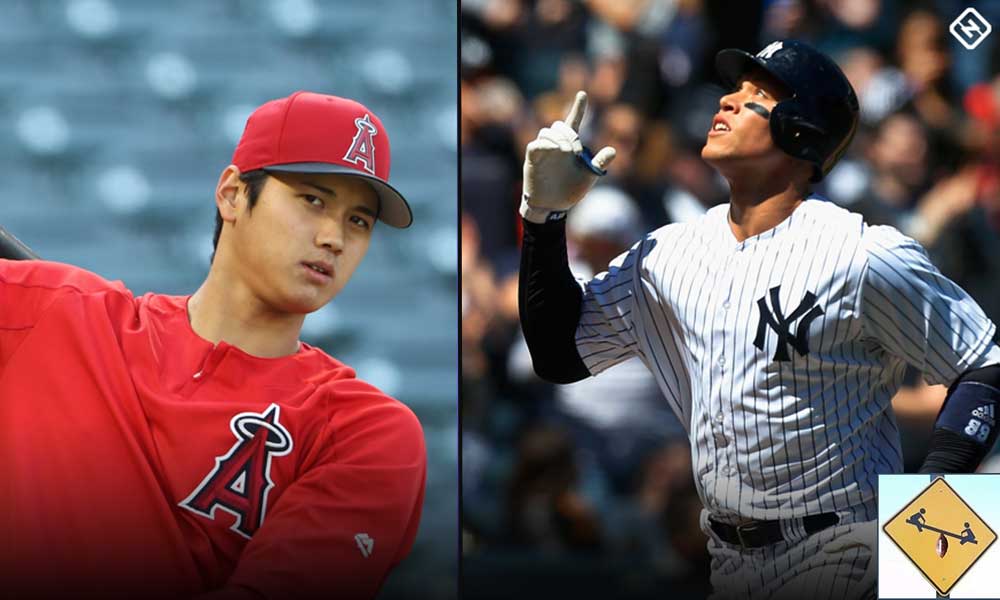 We know who’s declined to compete in the actual Home Run Derby 2018, but that won’t stop us! These are the BEST possible derby lineups among our current MLB star players.

Besides having the best winning percentage in the league and being the toast of the trade deadline discussion, the New York Yankees lead MLB in one more category: ideal Home Run Derby 2018 participants. The derby and All-Star game take place two weeks from now. Unfortunately, some of the best players fans would want to see participate (such as Aaron Judge) have already announced premature declines should they be asked. But that won’t stop us from creating our best-case scenario derby lineups.

Here are the rules. Just like in real life (unless they changed them again), we need eight players, with four coming from each league. The real derby would never choose pitchers or injured players, but we are left with no such restrictions. We could even nominate a recently retired player – hey Ichiro! Just limit your options to the realm of possibility. With that, here is my ideal lineup for the Home Run Derby 2018, presented by Purpleberry Puffs.

Two sets of teammates grace my AL lineup, and I’m guessing you may come up with the same quartet. Judge and Stanton are obviously the biggest home run draws in the sport. Even with Stanton’s slow start to the season, both players have been having stellar years. They have each already hit 19 home runs and have slugging percentages over .500. Neither player is in the top three in the AL in dingers, but they haven’t been slouches by any means. As for Trout and Ohtani, their inclusions are almost as self-explanatory. Trout is the best player in baseball and also happens to be in second place in home runs, having his best power season ever. And Ohtani, though injured, has been cleared to resume hitting! That means this is somewhat feasible even in real life. The most interesting man in the world possesses extraordinary power even though we’ve only seem him take 114 at-bats.

The AL is loaded with elite teams and superstar players, but I can’t even think of who would be my fifth choice for this event. Maybe another Yankee, Gary Sanchez. I’m interested to hear your selections but feel they might not differ from mine.

I was actually planning on not including Ichiro after his retirement, because his inclusion in this event feels overblown. But then once you glance through the NL, there aren’t a ton of guys who jump out as must-see attractions. Ichiro has that original swing and mystical power supply. He would certainly splice some interest into this squad. As for the others, they begin with a ho-hum, standard power behemoth. Harper, though having a pretty bad year for his expectations, has 20 bombs, good for second-place in the NL. He is barely hitting above the Mendoza line, which may indicate feelings of pressure from his pending free agency. But Harper is still the biggest draw in his league.

ALSO ON BUZZCHOMP: Time to Fix the NBA and NHL Season Awards

My other two participants are not national stars yet, though they might be in a year or two. Albies and Acuna are the two young studs on the surprise Atlanta Braves. Albies, who already has 17 home runs to his name, is 21 years old. Acuna, just back from a trip to the disabled list, is 20 years old and has six home runs in 32 games. It isn’t a prodigious pace, but his accomplishments are well known in the prospect community. It would be wild to see what these leaders of the next generation could produce on the national stage of the derby. Apologies to Nolan Arenado, Freddie Freeman, and others, but the stars in the NL are not that interesting in an event like this. I’d rather see the Braves’ pairing compete. It will give us a window into who may dominate the All-Star game for the next half-dozen years.

This is going to be fun, picking our ideal Home Run Derby 2018 lineups! The main stars in baseball are pretty obvious and the American League is home to all of them right now. Hell, New York and Los Angeles are home to all of them. This should come as no surprise. That being said, we do in fact differ in our eight participants.

My derby lineups contain a mix of the current MLB stars, current home run leaders, and current storylines going on in baseball this season. Tossing an homage to baseball fans, not just sports fans who tune in for the big names, is a good way to retain interest in the competition and All-Star weekend in full. We can not ignore the three way battle for AL supremacy between New York, Boston and Houston.

Unfortunately for the Astros, no one on their team is dominating the long ball or comes with big enough name value to bounce one of my four participants. Betts beats out Stanton because both players are hitting a lot of home runs this season, but the Yankees versus Red Sox mojo is too big to omit. Boston is a major draw and Betts is their star. He’s also pretty big amongst baseball fans and tied for 7th in dingers thus far.

Ohtani and Trout are the two biggest names in the sport in terms of headlines and international star power. With Ohtani officially back playing baseball, this foursome is completely possible! Judge completes the package of incredible star talent in my AL Home Run Derby 2018 lineup.

My NL lineup is far less interesting than yours, because including the upstart Atlanta Braves is just fun! Plus, I love the homage to Ichiro. But I must pick the best set of players for this season, and that includes four guys all in the top seven for home runs thus far. Harper is a lock because he’s a bonafide MLB star. Goldschmidt is a star among baseball fans and is also tied for 4th in dingers. Both of them make this fun!

The final two players in my NL lineup come from the two biggest draws in the National League, the Chicago Cubs and Los Angeles Dodgers. Schwarber is on pace to far exceed his 30 home runs from last season, with 17 already in 2018. He’s not a big name, but as a Cub he brings excitement and cache. The same is true of Muncy, who has 20 home runs already this season. As a young Dodger he checks both the young star box and the big market excitement box. Boom!


It’s amazing how AL heavy the star power currently is in baseball, but its the truth. Drop Muncy for Stanton and Schwarber for Altuve and you have a superstar Home Run Derby 2018 competition! Can we make this happen in the video game world at least?