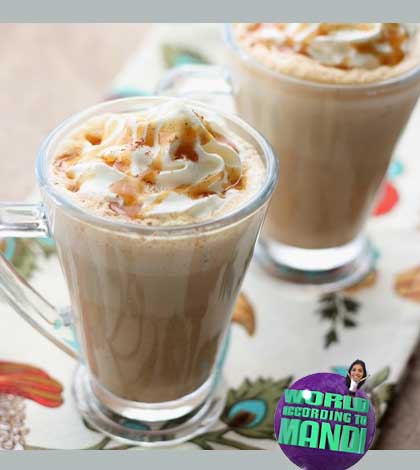 It’s that time of year. Holiday Lattes are everywhere, people are excited, and all the fall favorites have been unveiled, earlier than ever before. No thank you. I used to love Holiday Lattes, how early September meant they’d arrived. I loved trying the new fall flavors and was of course obsessed with pumpkin spice lattes. But are they worth it? Is that special latte really all that great? Nope.

Lattes themselves are wonderful: steamed milk and espresso blended to perfection. How could one make them any more delicious? Flavored lattes! Simply add Vanilla, add Hazelnut, add Mocha, add Pumpkin Spice, add Salted Caramel, add Gingerbread, or a personal favorite, add Peppermint Mocha. When I first discovered the plethora of amazing flavored lattes I was hooked. I thought, OMG I’ve died and gone to heaven. It’s delicious in a cup. I never thought about what made these lattes so tasty. I never considered why it’s best to just say no.

At the beginning of the year I cut out all added sugars for 30 days. It was a full detox of my taste buds and my body, and that meant no flavored lattes. I investigated all the foods I loved the most, and quickly realized the enormous about of sugar in those flavored lattes. I used to pine for a Pumpkin Spice Latte, counting the days until they returned. But what exactly was I waiting for? Sugar in a cup kids! A nonfat Grande Pumpkin Spice Latte has 49 grams of sugar. The total amount of sugar that a woman should have in one day is 25 grams. That’s double your daily sugar in a single drink! No thank you.

After cleansing my palate, that cup of sugar had zero appeal. But maybe other holiday and flavored lattes are different. Maybe they aren’t so bad and not so stupidly sweet. I wish that were the case. A Peppermint Mocha Latte ranks in with 52 grams of sugar, a Gingerbread Latte has 36 grams, and the Salted Caramel Latte has 53 grams. But hey, you can always get a Cinnamon Chai Tea Latte with 31 grams of sugar.

I keep asking myself, are flavored lattes worth the splurge? Nope, I don’t think they are. If you decide to splurge on one of these bad boys for breakfast, what are you going to have with it? I’d have fruit and yogurt, meaning I’m already eating natural sugars, then hopping up on a ton of added sugar. Talk about a sugar crash later!

Learning that all these lattes are just sugar in a cup was a bummer. It initially crushed me, but then opened my eyes to a new world of homemade lattes. And honestly, making them yourself tastes way better kids! Get creative at home and embrace using real flavors that explode in your mouth. Embrace a less is more attitude, actually taste the yummy espresso, and make yourself a fantastic latte.

For all of you Pumpkin Spice lovers out there, I found a bunch of super easy recipes on the internet. Try this one here. If you’re adventurous, you can come up with your own spice blend. I made my own Pumpkin Spice and love how it smells and tastes heavenly!

Another favorite of mine is homemade Chai Spiced Tea Lattes. You can either buy pre-made chai spice, or just make your own. This recipe is very easy and comes highly recommended: (http://allrecipes.com/recipe/237254/chai-spice/). It makes a big batch, which is great! You can mix it into the tea if you use loose tea, or mix it into the milk if you’re using bag tea.

Once you liberate yourself from these sugar-laden lattes, you’ll never look at a latte the same! Let’s face it, we all love those holiday lattes because they’re sweet treats. But that doesn’t make them worth it. Open your eyes to creating your own, and say no thank you to lattes loaded with added sugar.