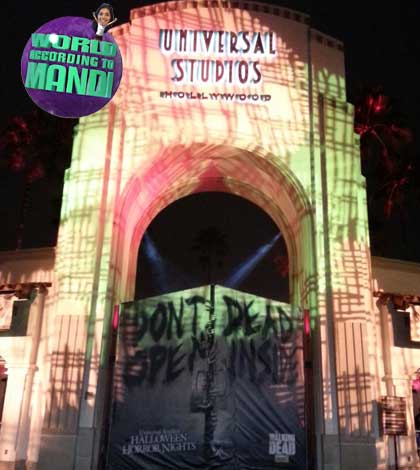 I love Halloween. Love it! It’s one of my favorite holidays; I mean what’s not to love? Dressing up in costumes…Check! Candy…Check! Scary movies…Check! Haunted Houses…Double check! It’s an amazing time of year and although I haven’t exactly dug having Halloween Time start on Labor Day with the advertising and decorations, this year I chose to embrace it. This year I decided why not stretch one of the most fun, creative, and silly holidays over as many weeks as possible!

Today being the first day of October, I’m super psyched to shout from the rooftops that Halloween Time is here! I already got a jump on the season by hitting up Universal Studios Halloween Horror Nights last weekend. Yep, I succumbed to the early celebration and it was awesome. If you can’t beat them, why not join them! This was my first time at Halloween Horror Nights after many years of wanting to attend, but always missing my opportunity. Let’s just say I picked a great year to start!

Halloween Horror Nights (HHN) usually has a theme and this season it’s all about ‘The Walking Dead.’ Pure obsession, with half the park devoted to zombies and the show, which was amazing because I’m definitely still obsessed myself. There were two huge ‘The Walking Dead’ experiences at HHN, the first being the Terror Tram! This just sounded scary. My first assumption: us on a tram riding around the back lot of Universal Studios as walkers jump out and try to board. I was wrong. It was even better. We literally got off the tram in the middle of the back lot and wandered around as zombies jumped out at us. Score! It was definitely a good scare, and since the tram controlled things, it was the least busy maze. Double score!

A mini ‘The Walking Dead’ zone was easily my favorite part of HHN. There were two mazes and a third zone of zombies. Leading up to the official ‘The Walking Dead’ maze was a long, meandering alley zoned off as Terminus. We were walking through the park and got detoured down the alley. All of a sudden the fog rolled in and we were blind. I instantly gripped my man’s hand tighter. Neither of us could see a thing as the alley was full of fog. One of our friends literally ran away, and then right in front of us were the walkers. OMG! Walkers! I had to maneuver us through the fog and through the zombies. I heard people screaming, yelling, and running behind us. It was so scary and so unexpected! I could have kept walking back through that alley all night long; although I might have pee pee’d my pants a few times. So scary!

The legit ‘The Walking Dead’ maze was also fabulous. Great sets and great story all straight from the AMC show. You basically entered the jail to enter the maze, past the Governor’s tank, and then walked through the jail itself. You then wandered through the store where they were attacked at the beginning of last season, venturing all the way to the end to Terminus! It was AMAZING! As a fan of the show I was hooked. Walkers jumped out at you. There were dead bodies everywhere and just being in that setting made me scared. I loved it!

It was so much fun going to HHN and even better that we went early in the season. Woo! There’s candy corn in my cupboard and Halloween Time is on! HHN was a great way to begin the month of October, now bring on Halloween! I’m ready for you, costume and all!