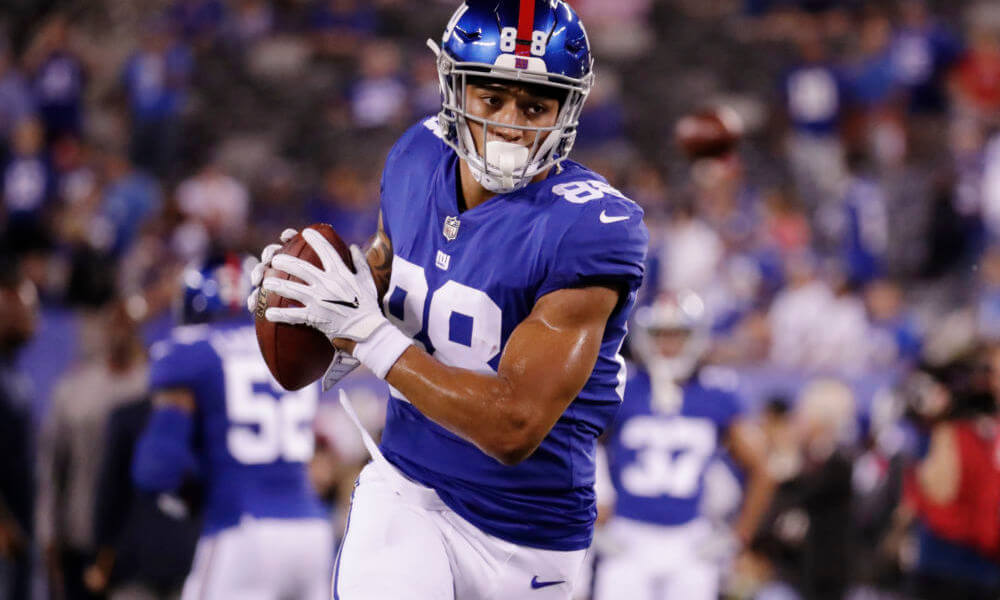 The future is now for the New York Giants, which means no one is more important the rest of the way than rookie first-rounder Evan Engram.

From a practical standpoint, the New York Giants’ 2017 NFL season is over. They are 0-5, tied with two teams for worst record in the league. Their -40 point differential is superior to a few clubs who have won multiple games this year, but it is also the fifth-worst mark in the NFL.

Even if the team was hitting its stride, 0-5 is nearly impossible to overcome. Fortunately for those who may be inclined to generate false hope, the Giants are not hitting any kind of stride. Their previously elite defense has not been on that level in ’17. The pass rush has been poor thanks to a bad start from Jason Pierre-Paul and a banged-up Olivier Vernon. Even the vaunted secondary has been weak.

On the opposite side of the ball, the New York offense has been horrendous and will likely be much worse moving forward. Odell Beckham Jr., Brandon Marshall, and Dwayne Harris are all out for the season following foot injuries. Sterling Shepard, Paul Perkins, and Orleans Darkwa all have week-to-week injuries as well. Hardly any skill players remain healthy for Big Blue.

ALSO ON BUZZCHOMP: Michael Schur is Our Comedy Overlord

One of the few that is healthy is rookie tight end Evan Engram. Engram’s NFL career got off to a competent start through one month. Through four games, he had 19 catches on 30 targets. Though he only found the endzone once and never topped 62 yards in a game, Engram’s start was serviceable for a rookie at his position.

For comparison, O.J. Howard has just four total catches on the season, though he plays behind Cameron Brate in Tampa Bay. And Cleveland’s David Njoku has 12 catches in five games, though already three touchdowns.

Engram’s fifth game was quite a different story from that first month. Against Los Angeles, the Giants lost all four of their top wide receivers. They were forced to utilize three-tight end sets just to field a full formation. In that scenario, one would expect the most physically talented TE to excel. Engram, the tight end who is more of a wide receiver anyway, should have shined in such a situation. He was able to split outside and banged against smaller defenders. Even still, Engram was a complete zero against the Chargers. He failed to haul in a single catch.

The Future of Engram

Obviously, the loss to LA was overshadowed by the injuries. But Engram’s performance was incredibly alarming and confusing. After getting a month of reps under his belt, he disappeared in a time when the squad needed him most.

Now that the season is over for all intents and purposes, the spotlight will fall directly on Engram for the rest of the year. The Giants need to see if he can become a major contributor in this offense.

When the team drafted him in the first round, it was a bit head-scratching. New York already had weapons in the passing game, as well as a number of acceptable tight ends. Engram was supposed to be an upgrade on those others at his position while boosting Eli Manning’s passing attack. For the rookie to actually be an upgrade and boost the attack, he needs to become the focal point of Manning now that everyone around him has hit IR.

No matter where Engram lines up, he should encounter mismatches in his favor. That is the gift of a special tight end. He is too big and strong for cornerbacks. He is too quick for linebackers. Only the best safeties in the NFL should be able to contain him play to play. We haven’t seen that yet, though Manning had too many weapons to force feed the young man. Week 6 is the time to start seeing it.

If things were different, the Giants could accept a quiet rookie year from Engram. His first five weeks are fine. They aren’t anything noteworthy, but they are fine. That pace would also be fine the rest of the way if New York was in a different spot. Because of how the team has crumbled, the rest of the season now has to be a showcase for Engram’s ceiling. We need to see the ceiling reached at least a couple of times. We need to know this isn’t another failed draft pick for Jerry Reese and company. There needs to be a building block for the future on the offensive side of the ball. The Giants no longer have anything on the line, but Engram sure does. An okay final 12 weeks no longer cuts it.