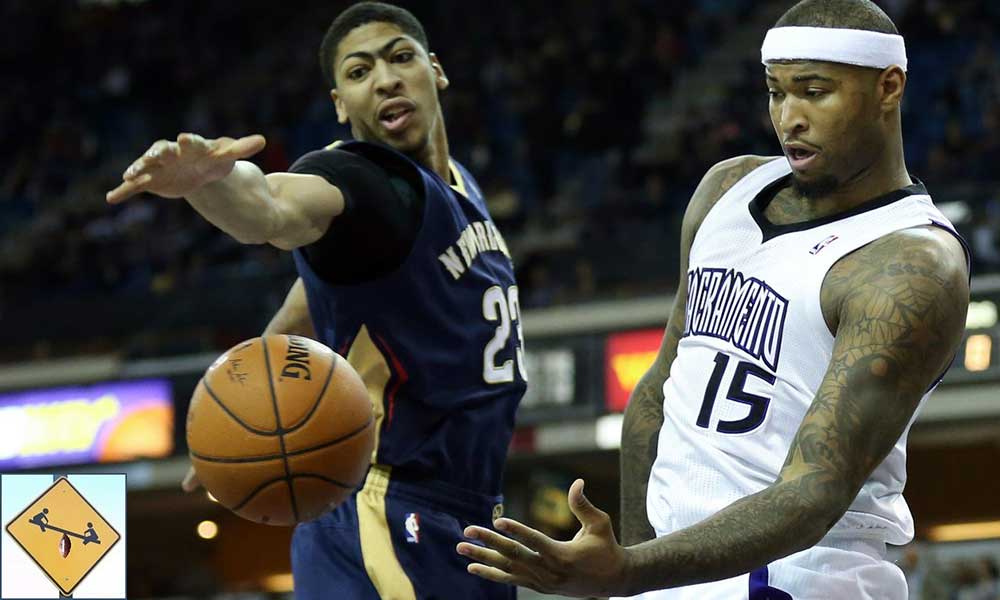 The New Orleans Pelicans are officially in the NBA Playoffs with the addition of DeMarcus Cousins. He and Anthony Davis are too good! Bring on the Golden State Warriors.

NBA All-Star weekend came and went. It was a pretty bad one, especially All-Star Saturday Night. That said, the entire weekend was completely overshadowed before it even ended. The Sacramento Kings traded all-star center DeMarcus Cousins to the New Orleans Pelicans. What a weekend for host city New Orleans!

This is monstrous and confusing news. For years now, the Kings have been supposedly trying to trade Cousins. Except that stopped very recently when they announced he was off the table. Apparently that should have alerted us to something being afoot. The other reason he was still being shopped is something from the brand new collective bargaining agreement. Stars eligible for the Designated Player Exception, such as Cousins, can receive massive extensions before hitting free agency. If Sacramento wanted to avoid paying the unpleasant Cousins the most prolific contract in NBA history, they had to move him or let him walk in a year and a half. Now on New Orleans, he is no longer eligible for such an extension.

ALSO ON BUZZCHOMP: Which Player/Coach Rules the Sports Mount Rushmore?

This wasn’t that tight of a spot the Kings were in, though. This seems like a massive underpay for arguably the most talented big man in the league. Some of the immediate reactions were of this vein. What exactly forced the Kings to make this deal? Hield looks like a nice wing but nothing special despite being selected in the top six last year. He isn’t a strong ball-handler or defender, and his shot is more streaky than one would like. An extra first- and second-round pick in the loaded 2017 NBA Draft is nice, but New Orleans’ selection should not be incredibly high. After all, they now have Cousins and Anthony Davis playing together, and Sacramento itself is one of the teams the Pelicans will hop in the standings after this move.

The Cousins-Davis pairing is fascinating. Both players have good range for big men, and Davis has expressed his desire to play power forward in the past, likely to avoid the heaviest banging in the defensive post. This team’s front line will be unguardable now. Yet the roster still isn’t great. Hield is just okay, but he was a useful piece on the wing. The same goes for Galloway. Casspi is an interesting throw-in to this deal. He wasn’t playing much for the Kings but has shown the ability to shoot well from the outside in the past.

I don’t know if N.O. will definitely make the playoffs now (though they should). I don’t know if Cousins will definitely re-sign there after next year (though he should). I do know, though, that this was a steal for the Pels. They added an elite all-star center for very little of substance outside of that first-round pick. That makes you wonder how many other teams around the NBA simply refused to make any offer at all for Cousins, not wanting his reportedly toxic personality in their locker room.

Great At Home Treadmill – Buy it NOW on Amazon!

I love when a team on the fringe makes a big splash like the New Orleans Pelicans did by acquiring DeMarcus Cousins. Don’t beat around the proverbial bush here. The Pelicans are officially in the 2017 NBA Playoffs with this move. I’m calling it. I’m on the bandwagon. Pairing Cousins with Davis bucks the trend in the NBA towards power shooting teams full of guards and forwards, yet it harkens back to a more traditional NBA where the best front court won the championship.

Fans love surprises and matching the NBA’s best front court of dominant ‘big men’ against its best shooting team in history would make for an incredible round one. The Golden State Warriors versus the new New Orleans Pelicans is a clash of styles. Golden State is obviously still better, but if any team can shock the world and pull of the monumental upset, its one with an equally formidable strength of opposing style. How does a ‘small’ team defend against the league’s best ‘big’ team? We may find out!

Cousins brings his double-double average to a team currently on the cusp. The Pelicans may be eleven games under .500 as of President’s Day, but New Orleans is only two games back in the wins column from the 8th seed in the Western Conference. Cousins will push the Pelicans ahead of Denver for the West’s final seed. This new team can easily play .500 basketball and climb their point differential back to zero. These are not lofty goals, but extremely realistic barometers for the West’s new dynamic duo.


Anthony Davis actually getting help in New Orleans is an incredible turn of events. Who saw this coming? Most expected Davis to eventually walk for a chance at a title. But now he has a legitimate partner to roll with. Today’s NBA is top-heavy, but entry into the top simply requires combined star power. Now the Pelicans have a real case for their own.

BuzzChomp is an affiliate for products and services recommended herein. Please read our FULL DISCLAIMER for further information on affiliate programs and opportunities.