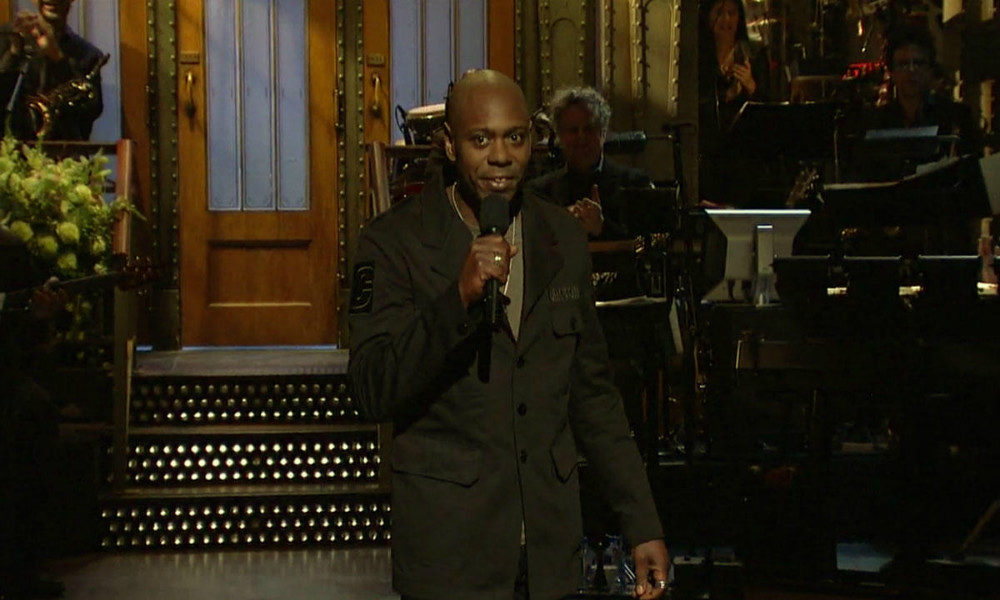 It had been quite a long while since anyone saw Dave Chappelle on a television show other than a late-night talk show appearance here or there. His return finally came as host of Saturday Night Live, a glorious evening that nearly hit every button.

Chappelle’s Show was so impactful, it’s easy to forget it only aired for two full seasons and a third, pieced-together season. The classic sketch show went off the air more than 10 years ago and Dave Chappelle stayed out of the limelight since, until being named host of Saturday Night Live for the November 12th episode. Yet even in that brief amount of time, so many of the characters, scenes and scenarios created by Dave resonated with the viewing public. Some of the most classic of those characters were reincarnated in a Walking Dead parody on his episode of SNL. Though the sketch was filled with nostalgia, it overshadowed some of the better sketches in the show that night.

The cold open was not one of the funny sketches, because it wasn’t meant to be. It saw Kate McKinnon, as Hillary Clinton, playing Hallelujah on the piano. She announced at the end that she, Clinton, would not give up and neither should we. Dave’s monologue followed: 11 minutes of uninterrupted stand-up. It had some funny jokes and moments, but otherwise it simply felt like Chappelle was feeling himself out on the stage, finally back in front of a television audience.

ALSO ON BUZZCHOMP: New York Giants Line Not Worth Investment

The first sketch of the night should have been a good one. It saw Dave and guest star Chris Rock watching the election-night coverage with a few white people who become utterly confused by the results. While the jokes seemed like they would have been great on paper, the execution left me wanting more. Dave and Chris were both a bit shaky on their line reads, which didn’t help matters. It was an expected sketch premise, and although it didn’t kill, it also didn’t bomb.

Next up was the Walking Dead parody and Chappelle’s Show homage. The time-traveling haters were there; Tyrone Biggums, the black white supremacist, Lil Jon, and Dave’s white anchor were as well. The comments were funny enough, but it felt a bit forced. We didn’t need to see all of these characters jammed into one sketch, essentially covering their bases. They could have thrown one guy into something or not used any Chappelle’s Show characters at all. This way felt pandering, mostly because the sketch itself wasn’t funny enough to hold up on its own. The point of the sketch was to see the old friends.

Fortunately, Weekend Update was on-point. I enjoy Michael Che and Colin Jost. I think they both do a good job. Update never crushes it, and it never has. People have a skewed memory of Update being this home-run bashing segment each week. It usually delivers clever one-liners that leave people consistently chuckling. It’s not meant for applause breaks.

I really enjoyed the sketch that followed Update. It was the brief start of a sketch that was interrupted for a conference and analysis of how the sketch went. My thought was that the design stemmed from them having just a nugget of a sketch (the Jheri curl team) but no way to see it through. Using the post-sketch press conference worked for me.

What followed was a piece that is semi-recurring and usually fills the 10-to-1 time slot as the last sketch of the night. They moved it up and it was one of the better ones of the night: McKinnon as a weird late-night drinker finding love before last call. The man she finds changes with the host, but this one was so good even the stony Keenan Thompson broke.

Moving up the last-call drinkers left space in the final segments for a Kyle Mooney special and a wacky closer. Mooney’s taped videos are very odd; this one didn’t quite qualify as that, but it had Mooney and Leslie Jones as the subjects. It felt a bit bland, building off of a premise that Mooney is a virgin and Jones is looking for love. I could have done without it.

The closer made up for it though, as Chappelle, and eventually his sketch sister, drink breast milk from mother Jones. It was a fun way to end the evening that included Chappelle not totally nailing his triumphant return, a throwaway “kids talking about Trump” taped piece, a pushing-300-pounds Busta Rhymes featured in A Tribe Called Quest‘s second music act, and everything else that went on. It was good to see Dave on TV, but this didn’t totally feel like his proper forum.