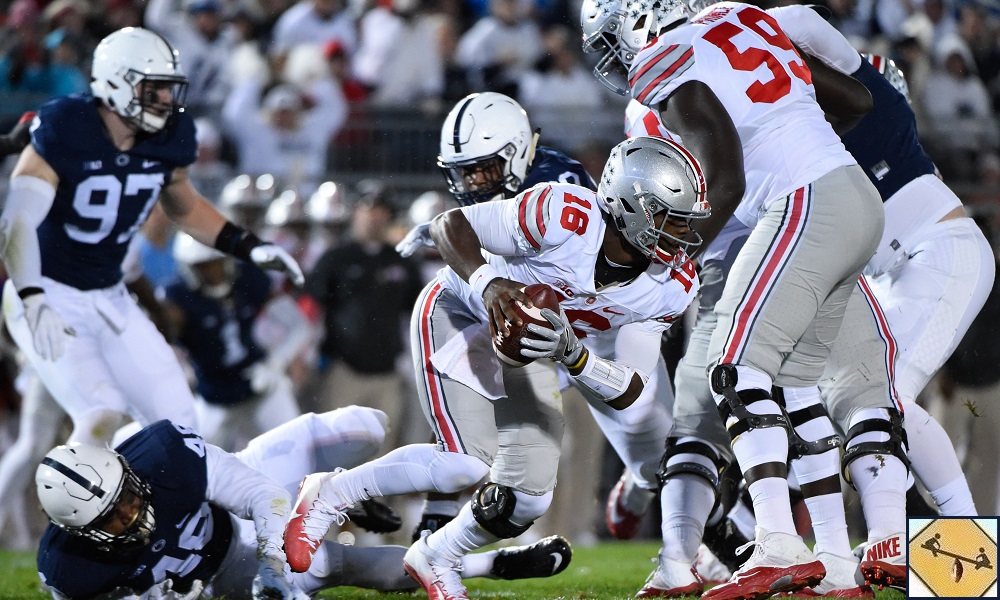 The only constant is chaos and that’s why college football is amazing. Five of the top nine teams all lost, upending the College Football Top Four and playoff picture.

A shakeup has been reported; notify your next of kin! Three of the top four teams in college football (and five of the top nine and seven of the top 17) lost this weekend, throwing the College Football Playoff picture into COMPLETE DISARRAY.

Hear me out, but is it possible that the losses of No. 2 Clemson, No. 3 Michigan and No. 4 Washington won’t actually change the committee rankings very much? We established last week that there is a clear top seven in the country this year. It contains those three squads, Alabama, Ohio State, Louisville and Wisconsin. The issue here with dropping the previous 2, 3 and 4 very far is that they have an unimpeachable edge over the only teams that could realistically hop them.

ALSO ON BUZZCHOMP: These Players SHOULD Win 2016 MLB Awards

Clemson lost and has been playing on the edge all year, but it has already beaten Louisville head-to-head. Wisconsin looks like a very good club, but the Badgers have already played and lost to both Michigan and Ohio State. There is nowhere for these teams to go, with the exception of Washington. And the Huskies actually have the ‘best’ loss of anyone that fell on Saturday, losing to No. 20 USC.

We already know the committee doesn’t think much of Washington’s schedule, so this will probably drop the Huskies to seventh in our top seven. I also expect to see Ohio State leap up to second or third. What happens with the rest leaves me confused.

I personally think Louisville is better than Clemson, though we both already felt that way last week before the Tigers had even lost. The AP and coaches polls finally seem to agree, but that logically makes no sense. We saw the two teams play, and Clemson was superior (albeit by a slim margin, and the Tigers were at home). So why would Clemson losing to a third party change the minds of the voters?

Here’s how my top four stands. It’s pretty in line with last week because I don’t feel as though much changed outside of Washington disappointing me.

Washington would be fifth for me, and it still has life considering Michigan and Ohio State play each other later this month.

The top seven teams in the country have not changed, but I’m prepared to expand things to eight and completely shake up the top four who will be playing in the college football playoff. The only ‘good’ loss was had by Washington, as I’m greatly disappointed in the showings of both Clemson and Michigan over the weekend. Top teams do not lose close games to unranked opponents. They put them away in the third quarter.

The eighth team in the country officially matters and its Penn State. Their two losses came against Michigan and Pittsburgh, the team who just beat Clemson. Therefore PSU lost to the team previously ranked third in the playoff standings, as well as the team who just beat the second ranked team in those same standings. Not to mention PSU defeated Ohio State. Either Michigan or OSU is losing another game, since they play one another, so Penn State controls its own destiny. They now matter in the playoff rankings and could actually sneak in as the fourth team.

The four best teams in the country have changed, because late season losses to unranked opponents mean a lot. Washington was my fifth team last Monday and they now fall back to seventh with their loss to USC. Wisconsin moves up to sixth and the Michigan Wolverines have fallen back to fifth in my rankings. Losing to Iowa was not good. Here’s how the Top 4 now shape up:

The way rankings should work is that teams slide up as others slide back. I had Louisville third last week and Ohio State fifth. Neither lost, so they slide up accordingly. The teams that did lose slide back. Clemson had the least egregious loss, since the team that beat them also beat Penn State who beat Ohio State. I also find them to be a better team than both Michigan or Washington right now. The Tigers put up over 40 points in their loss, while neither the Wolverines and Huskies could muster two touchdowns.

Exclusive Movie Review: Arrival the Best of Sci-Fi and Drama