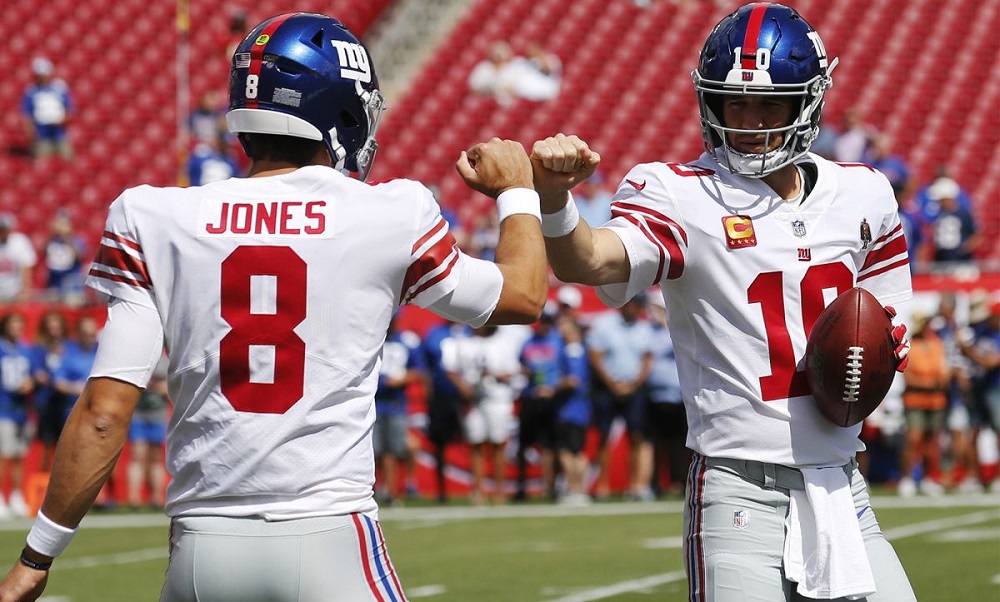 Suck it haters. Daniel Jones was “Danny Dimes” for one glorious afternoon and the New York Giants won. All you “analysts” must now eat your words.

Admit it already. From today forward, every “analyst” and host must stand on their respective soapbox and admit they never actually watched Daniel Jones play at Duke. They were piling on the New York Giants for drafting him sixth overall. This is because they had no idea what they were actually talking about. None of them watched a minute of Jones play football.

— Daniel Jones in the huddle

I’ve said this before and will say it once again. The avalanche of negativity thrown at Daniel Jones was incredible. Secretly I hope he used that as motivation going into his first start in Tampa Bay. Jones gave all his haters the proverbial middle finger as he led the Giants to their biggest comeback win in team history.

Daniel Jones finished the game going 23 of 36 for 336 yards and accounting for 4 TDs (2 passing, 2 rushing). He never looked rattled in the moment, despite his team playing from behind. Saquon Barkley exited the game in the 2nd quarter with an apparent high ankle sprain, but that did not deter our quarterback. Jones relied heavily on Sterling Shepard (7 catches for 100 yards and 1 TD) and Evan Engram (6 catches for 113 yards and 1 TD) to help lead the comeback. New York desperately needed this victory.

When the Giants entered halftime down by 18 points, there was no doubt in my mind they were going to lose the game. The defense was giving up play after play and Barkley was not coming back. How could a rookie quarterback pull off such a stunning win? No one would have blamed Jones for taking the loss in this situation, but that is not what happened my friends. The Giants came out of the locker room and needed only one play for Jones to hit Engram for a 75-yard TD. After the successful 2 pt conversion, what felt like an insurmountable 18 point lead was cut to 10, with an entire half to go.

After the Giants’ defense decided to show up, forcing their first punt, New York’s offense marched right back down the field. Eight plays and 80 yards later Jones hit Shepard for a touchdown and oh my god, the Giants were only down by a field goal. After a few more punts, the Giants forced an interception on their own 26-yard line. Jones then lost a fumble, his lone blemish of the day, which turned into three points for the Buccaneers. Next the magic happened.

Also on BuzzChomp: The Deuce Season 3 Ep 2 Reaction, All Falls Down

With 3:16 left on the clock on their own 25-yard line, Daniel Jones channeled his inner Eli Manning and started the New York Giants on what would be his first 4th quarter game winning drive. On 4th and five from the Tampa Bay seven yard line, the seas parted in the middle of the field and Jones ran in his 2nd TD of the game. For the first time in three games the Giants had some life in them and were on the verge of winning. It was glorious.

As happy as I was that the Giants had the lead, there was still 1:16 left on the clock. Of course the Buccaneers were going to get within field goal range. After a predictable 44 yard catch by Mike Evans, the Giants were staring 0-3 right in the face. Yet Tampa Bay missed the field goal, and the Giants escaped with their first win of the season. The excitement was enormous. Saquon Barkley hopped as fast as he could on crutches to join in the celebration.

Now it’s time to bring my excitement back down to earth. I do not understand why for the 2nd time in as many games the Giants’ defense did not show up in the first half. They let Tampa Bay score on every single possession and build an 18-point lead with ease. Mike Evans had 147 yards in the first half and 3 touchdowns. He looked like he was on his way to a 200+ yard day, but after halftime a literal switch was flipped.

New York’s defense only surrendered three points in the second half and forced an interception and four punts. I know its only three games, but why the F does it take an entire half to figure out how to play defense? What are these guys preparing for all week? Don’t get me wrong, I’m happy that the Giants figured it out and won the game. But if you are going to have double digit deficits every game, then you are not going to win many games.

Next up the Giants welcome a fellow NFC East bottom dweller into MetLife Stadium. Yours truly will be in attendance to witness Daniel Jones’ first ever home start. This place will be rocking. I know its only a one game sample, but the offense looks more dynamic and more mobile. The playbook is now open and even though we will be without the services of Barkley for the next six weeks, there is a buzz with this 1-2 football team.

Both Barkley and Golden Tate will be returning sooner than later. A few more victories make their return even warmer. Then we can see what we really have going forward. Prediction: Giants 24 – Redskins 23