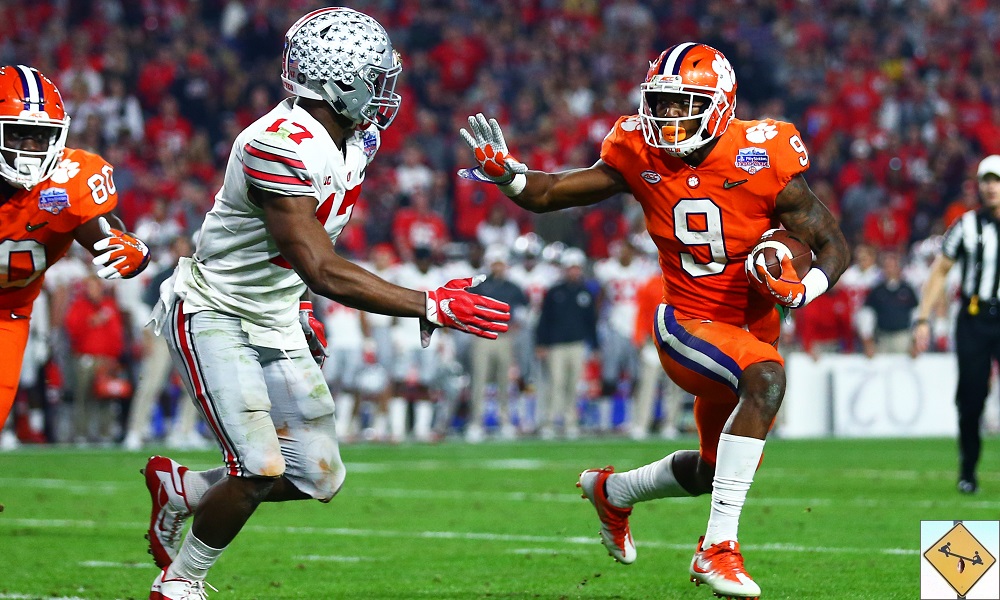 The power of the Coaches’ Poll is undeniable and the rankings dominate early season action. How can we justify such significance for polls without validity? College Football Polls 2017.

The first editions of preseason college football polls are out. The coaches’ poll lists some heavy hitters near the top. Alabama, Ohio State, and Florida State rank one through three in the opening edition. USC and defending champion Clemson round out the top five. You have to go down to probably 17th before not reading a blue-blood college football institution on this list. And 17th is Louisville, who has the defending Heisman Trophy winner at quarterback. 2017 is not a year for underdogs.

The interesting thing about college football rankings is the preseason polls feel like they have an inordinate amount of power, even though they are based on nothing. No games have been played with these rosters (and in some cases, these coaching staffs). Preseason polls are just blind guesses at how teams will gel.

And yet, rankings for the coming weeks will all be based off this opening edition. If an unranked team has a bunch of good wins, it will take them a long while to crack the top of the rankings. Likewise, if one of those top five clubs loses, depending on the opponent, it won’t immediately fall out of its prime spot. We need more proof that a good preseason club is bad before trusting our eyes, just as we need more evidence that an unknown preseason team is legit.

This makes some sense. It also makes no sense. We need more than a couple games’ worth of proof that something we didn’t believe is true. That is logical. However, what we believed preseason was based on nothing other than speculation. No team in college football brings the same roster year to year. They aren’t allowed to because of graduations, early departures, and freshmen entrants.

Where do you stand on the power of the preseason poll? Should we even have polls until a month or so has passed? Or now that we have the College Football Playoff committee late in the year, should we have polls at all? What purpose do they serve other than increasing TV ratings when two “top” teams play each other?

College Football needs it polls, because without them the sport would lack significant intrigue until the Playoff committee begins ranking teams. We see this in college basketball, where most casual fans barely blink an eye until February and the lead up to March Madness. Preseason college football polls build necessary excitement for teams and games that don’t really matter just yet. For this reason, I love the polls and rankings!

As a fan whose Alma mater did not and does not have a football team, these rankings remind me that football is back. I’m a casual fan of college football without a true rooting interest. I’m a fan of USC because Los Angeles is my home, so I’m psyched to see them ahead of the defending champions. Does it matter? Not one bit. Does it get me excited for football? Hell yes it does.

The power of preseason college football polls 2017 is an entirely different animal. There is only one logical explanation for the entire college football community getting behind these polls after week 1 of the season. They enjoy talking about them! Otherwise the play on the field would be proof enough of a team’s true abilities. After one month of games we know if the coaches’ poll from preseason was accurate or not. We know the top five teams in the country. Giving the early polls power and significance validates their existence. It creates early season controversy that would not otherwise exist. Why should professional wrestling be the only sport allowed to conjure up stories and controversy? It works so well for wrestling and MMA and boxing. Pre-fight dust ups are practically necessary to garner interest.

More Sports: MLB Stats That Can’t Hold Up This Season


The NFL unintentionally or intentionally did just this last season. Tom Brady’s suspension to begin the year brought with it mountains of interest and rankings and conjecture. Since college football has very few celebrity players, the preseason polls make for excellent storylines. I mean Clemson got the second most 1st place votes, yet ranks fifth in the coaches’ poll. They are defending champions! I’d place Clemson third and knock USC back a bit. The Trojans are up there because of Sam Darnold, but that doesn’t make the team better than its competition at the top. How about your Hokies ranking in at 22nd? Is this too high or too low? I don’t know but I love it!

Connect with the Writers: