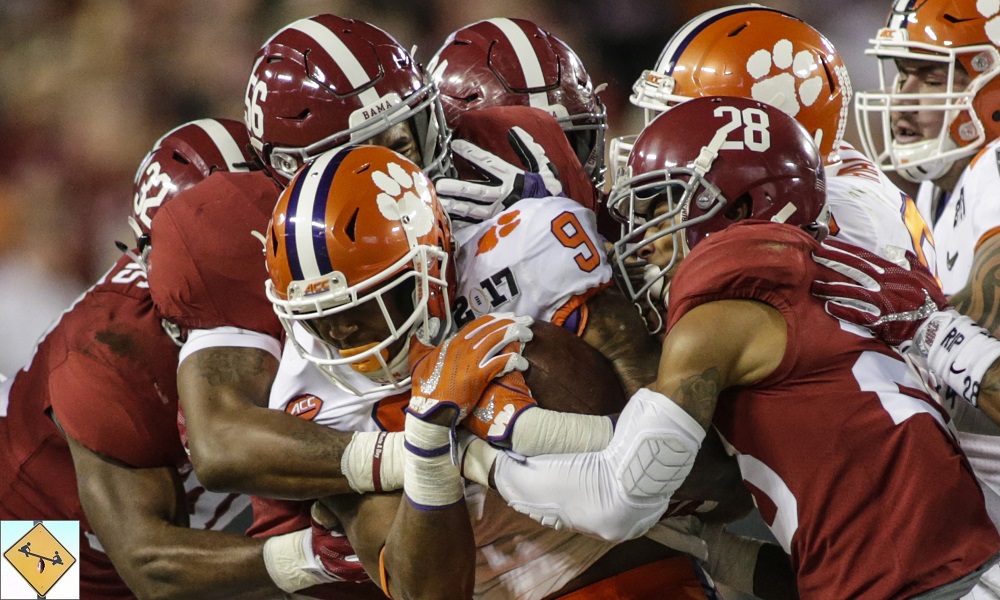 We love dynasties! We hate dynasties! Alabama once again plays Clemson for the college football championship 2019. No one can agree if this is good or not, so we jump into the fire and debate!

For yet another season, the college football championship 2019 will pit Alabama against the Clemson Tigers. As with our professional sports, people complain about dynasties in the moment but always appreciate them when looking back. With essentially dual dynasties battling each other year after year (with the lone hiccup of the two teams playing each other in the semifinals last year rather than the finals), though, any football fan has to admit how currently awesome this is.

The only drawback is the lack of interesting games outside of this pairing. Neither semifinal match in 2018 was even competitive, let alone incredibly interesting. In fact, the entirety of the season felt that way. Alabama and Clemson both went undefeated during the regular season, and it always felt like they were just waiting to play each other. Notre Dame and UCF also went undefeated, but ND struggled to get there, and UCF didn’t play anyone on its path. The inevitability of this 2019 national championship reminds me of the NBA titles between LeBron and the Warriors.

What is the answer for the College Football Playoff if only two of the four teams are worthy? Expanding to an eight-team field would just exacerbate the issue. Adding more teams (AKA adding worse teams) would lead to more blowouts. But moving back to a two-team, BCS format isn’t desirable either. Can you imagine the vitriol if an undefeated Notre Dame didn’t get a chance to play for a title?

I suppose the real answer is that teams deserve to keep getting blown out and embarrassed by Alabama and Clemson until they can out-recruit and out-coach them. College football success is supposed to be cyclical. Rosters automatically turn over every few years because of graduations. The only constant is the recruiting and coaching ability of the man in charge.

For the 2019 class, Alabama is yet again number one, and Clemson isn’t too far behind. That likely means another year of the pair competing for a title. I’m not upset; I’m just worried about the people who will be upset. Is there any way out of this? Should we even want to get out of it in the first place?

Dynasties rule! Dynasties suck! No matter which side of the argument you choose, dynasties are inevitable. Because of this simple fact, I believe we MUST celebrate them. Sure, the College Football Championship 2019 is a predictable matchup, one that we’ve seen multiple times over the last four seasons. This is the third time in four years that these teams have met in the national championship game, and the fourth time in five years of the College Football Playoff’s existence that Alabama and Clemson have faced one another. We could not have asked for a better outcome!

Despite the predictability of these two teams playing one another, there is no one I’d rather see play in the college football championship 2019. Because Alabama is playing Clemson, I am interested. As a casual fan of college football, I love watching two dynasties battle for the title. The same was true of the NBA and LeBron James versus the Golden State Warriors. We knew this would be our NBA Finals matchup and because it was the best versus the best, I absolutely was rooting for it. We can no longer have this outcome, which ultimately hurts the game.

People hate dynasties because they feel like the dominance of a single team is holding back their own from winning. That is loser talk. As a fan of the New York Jets, I can personally attest to the Patriots’ dynasty motivating my fandom and wanting my team to get better. When will the dynasty be toppled? Who will strike the blow? In terms of Alabama versus Clemson, I’m rooting for the Tigers to even up this series in the wins column. The Crimson Tide are 2-1 in the title game, while Clemson is currently 1-1 overall. Both teams can leave this season with two championships, or Alabama can cement itself as the king/queen of the CFP thus far.

The reason these dynasties are perfect for the college football championship 2019 is that proponents of both the old system and the new system get what they want. Every team “deserving” of a shot at playing for the national championship gets into the CFP, yet the top two teams keep playing in the title game. If the old system was in play, we’d have the same matchup. That is exactly how it should be! Both systems technically work, but the CFP adds more transparency, since there is a semi-final round of play. We don’t have four evenly matched teams atop the sport, we have two. Someone else needs to step up, because currently Alabama and Clemson are in a league of their own.

Next on BuzzChomp: Burn Resisting Forces in Your Life (New Video)