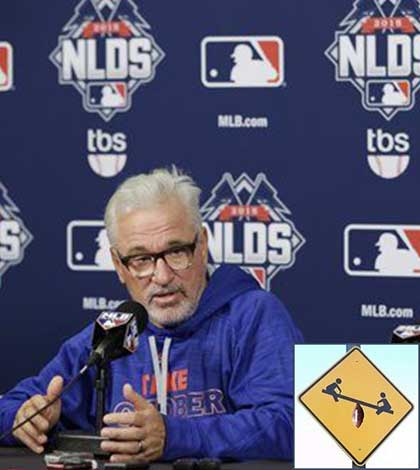 The Chicago Cubs already made history, dismantling a Pirates team primed for success. Pitching will take the Cubs to the World Series, but pitching stands in their way. The NLDS is underway with some incredible MLB baseball on tap.

Jake Arrieta and the Chicago Cubs put a whooping on the Pittsburgh Pirates in the NL wildcard game Wednesday night. It was the type of dominating performance that backs up why Arrieta is a Cy Young favorite and why the Cubs finished the regular season with the third-best record in all of baseball.

It is also the reason why I thought the winner of that wildcard matchup had a good chance of winning the pennant. Well, here we are. Do the Cubs have a real shot at winning the National League and advancing to the World Series?

ALSO ON BUZZCHOMP: Manager of the Year in NL to Joe Maddon?

They play NL Central rival St. Louis in the NLDS. Because Arrieta had to pitch Wednesday, he is unable to go for at least a couple of games in the division series…as is the designed drawback of the wildcard match.

This certainly puts Chicago at a disadvantage. The rest of its rotation is nothing special. Jon Lester is very good, but nothing close to Arrieta’s level. The rest of the rotation, depending on who gets the call, is a group of misfits and cast-offs for the most part. Yet the Cubs seem to have the best lineup in the NL to go with one of the best starting pitchers. That could be enough to advance through to the NLCS.

From that point, with either the Mets or Dodgers on tap, Chicago would match up pretty well on the mound. I’d be worried about both New York’s and LA’s offense in such an instance.

It was unwise to back either wildcard club before the game took place just because it would have been so easy for either to be eliminated in a one-game, winner-take-all scenario. Now that the Cubs have actually advanced though, they seem to be the favorites in my mind. Unless the Cardinals prove everyone is healthy, including Adam Wainwright (likely in a bullpen capacity), Chicago is the most well-rounded of the bunch.

And Jake Arrieta is freaking untouchable.

I said it before, but its worth repeating. Pitching wins championships, and a dominant ace is the backbone of MLB postseason success. The Chicago Cubs have that ace, and a nice complement of arms in their rotation as well. I’m not concerned about Arrieta starting game three or four instead of game one against St. Louis. For Chicago, game one came on Wednesday in a victory over the Pirates. Their first game with St. Louis is more like game two, with the Cubbies riding high on a ton of momentum.

You know which other NL teams have dominating aces in their rotation? Yeah, both the Mets and Dodgers do. So do the Blue Jays and Astros, for that matter. This crop of teams in the postseason is outstanding, but there’s something about the Cubs that has them standing out right now. Maybe its the ‘Back to Future’ prognostication, or the Theo Epstein history. But Chicago has a spark that I too can’t ignore.

I love the Cubs in this NLDS matchup with their division rival, but I’m not ready to put them in the World Series. Momentum and pitching has them firmly as NL favorites, but I want to see them stick it to St. Louis before I pick them to defeat the Mets or Dodgers.

Chicago is on fire, rolling head long towards a title. I’m with you, watching Jake Arrieta pitch a little longer would be sweet. Watching him pitch in the World Series would be even sweeter.

More Sports: Will Joe Maddon win Manager of the Year in NL?