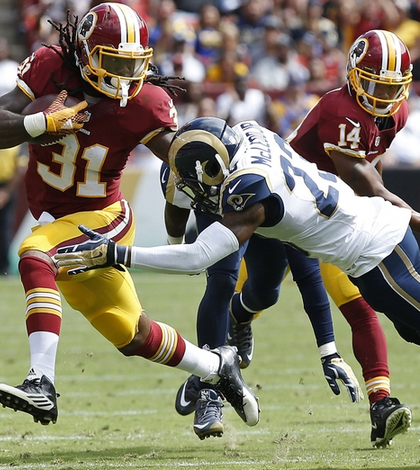 For the St. Louis Rams, the 2015 NFL season has not gone as planned. Its been full of drastic “Yeah, but” moments, leaving fans wondering if the playoffs are possible. Which side of the spectrum do the Rams fall on? Let’s break down each moment so far.

The 2015 season began for St. Louis with an exciting win over the defending NFC champion Seattle Seahawks. The Rams won 34-31 in overtime to start the year 1-0 and grab a big win within their division. Quarterback Nick Foles played very well in his first game as a member of the Rams, especially considering the competition. Foles threw for and a touchdown, while completing 67 percent of his passes against the vaunted Legion of Boom that is the Seattle defense.

Yeah, but that Seattle defense was playing without starting safety Kam Chancellor. The Seahawks also held the St. Louis rushing attack in check all game; the unit totaled only 26 carries.

Yeah, but the Rams were playing without top draft pick Todd Gurley, as well as proposed starting running back Tre Mason, who were both sidelined with injuries. The running game was headlined by Ben Cunningham, a third-year back out of Middle Tennessee who was third on the depth chart for a reason.

St. Louis also benefited from a punt-return touchdown and ended up blowing a 24-13 fourth-quarter lead. Yeah, but Seattle needed special-teams points as well. A punt return was the Seahawks first score of the season. And a win is a win. St. Louis came out on top despite spoiling a late lead.

Heading into Week 2, hope and expectations for St. Louis were high. The Rams faced one of the supposed cellar dwellers of the NFC, the Washington Redskins. If they could defeat the mighty Seahawks, surely a Redskins/Rams matchup would be cake.

Instead of taking care of business, Washington handed it to St. Louis, winning handily, 24-10. The Rams’ strength, its defensive front four, got absolutely steamrolled by Washington’s running game. Alfred Morris and rookie Matt Jones combined for 37 carries and two touchdowns. Morris was actually held in check for the most part, but Jones was unstoppable. Meanwhile, St. Louis’ own offense sputtered badly against the Washington D, failing to even get on the board until the game’s second half.

Yeah, but maybe this Washington squad isn’t as bad as everyone thought they would be. The Redskins have now played two games exceedingly well this year. In Week 1 they barely lost to a highly touted Miami Dolphins team, and now have the win over up-and-coming St. Louis. If it’s possible for a team’s own loss to make itself seem better, perhaps this was it for the Rams.

The real truth about the St. Louis Rams will now come hard and fast. Here is the Rams’ upcoming schedule, their next three games before a bye in Week 6:

Can St. Louis make the playoffs? It won’t be long before we find out if the Rams are for real.

Yeah, but with that level of competition, couldn’t a pretty good team still go 0-3? The Steelers, Cardinals, and Packers may be three of the best six or seven teams in the entire NFL. Since the Rams aren’t on that level, losing to each one wouldn’t be out of the question, especially with two games on the road.

So it may take even longer to know for sure whether St. Louis can be a serious playoff contender. Here is the next batch of the team’s schedule following its bye:

Suddenly things are looking up. If the Rams do fall to 1-4 in a worst-case scenario heading into the bye, moving to 4-5 after the bye isn’t unrealistic.

Yeah, but a 4-5 record heading into Week 11 would still mean St. Louis is a number of games out of the division race with a tough second-half schedule still to work through. Alas, that is always the case in the NFL. An easy stretch won’t last for long, and even if it comes along, no win is guaranteed.

The Rams offense has some issues to work through, but Tre Mason is back and Gurley is expected back within the next week or two. Last year’s go-to receiver, Brian Quick, is also working himself back into the rotation after shoulder surgery. Yeah, but the defense is really the key to any playoff run this team hopes to have. A front four of Robert Quinn, Aaron Donald, Chris Long, and Michael Brockers cannot be pushed around by anyone’s opposing front, let alone a team like the Redskins. This is the biggest strength of the roster, and a unit that many consider the best in the entire sport. It will need to exert its dominance for St. Louis to reach its peak this season.