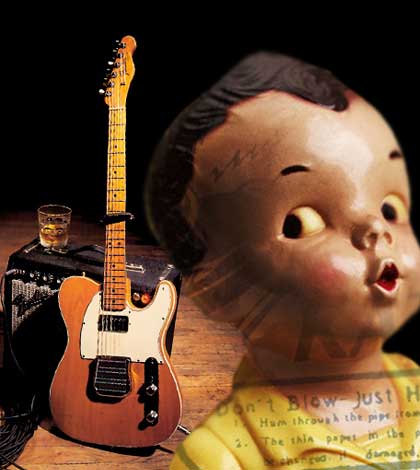 When was the last time you heard someone say they were born at exactly the right time? Well, when it comes to music I can say that I was born at the perfect time!

When was the last time you heard someone say they were born at exactly the right time? Well, when it comes to music I can say that I was born at the perfect time! Let me try to explain.

I was born in 1963, by this time the music of the 50’s was over and there was a wide range of new music taking hold. There were The Stones, CCR, Marvin Gaye, The Supremes, Janis Joplin, Jimi Hendrix, the Doors and The Beatles (I was too young to truly grasp Beatle-mania, but boy did I make up for that later). That’s not to say some of the artists from the fifties weren’t still relevant. I mean, Elvis was still chugging along; Jerry Lee, Chuck Berry, BB King and Little Richard were still carrying-on in spite of all the young “up-starts” from England and the southern half of the U.S.

For the most part, the music of the 60’s and early 70’s was quite busy, raising awareness about the war in Vietnam, promoting civil rights, reflecting on the state of our planet and just plain old gin-soaked rock-n-roll. We were all finding out who we were and how we fit into this crazy world. It was an awakening both musically and spiritually.

As I hit my teens it was the 1970’s and a NEW type of music was emerging. There was KISS and Black Sabbath, but yet there was also the Bay City Rollers and Neil Sedaka (look these guys up on you tube, you won’t believe your eyes!). The 1970’s had to be the most diverse decade for music in history. There was of course the groups mentioned above, but there was also Fleetwood Mac, Peter Frampton, Barry Manilow, Wings, The Kinks, Lynyrd Skynyrd, ELO, Bad Company…you get the idea. But probably most notable category of music to emerge during this period was (…wait for it…) DISCO! That’s right; Saturday Night Fever and The Bee Gees don’t even begin to scratch the surface of what was going on with this genre. Suffice it to say, with all this diversity, the music business was not done with us yet… (NOT EVEN CLOSE)!

Here comes the 1980’s! Oh boy, this decade has us all still scratching our heads. The decade kicks off with John Lennon having one last go at it (and he delivered his best record to date), “Double Fantasy.” Soon after its release, his life was cut short (truly sad indeed). Then, there was this whole new thing, something I never saw coming…Music Television! What? I know! Truly magical to say the least! MTV turned the music business upside down! More new music emerged as the 80’s wore on… the Clash, Elvis Costello, R.E.M., Squeeze, Flock of Seagulls, Thompson Twins… (Oh my)! There was the Ramones, the Talking Heads, the Go Go’s and countless other one-hit wonders, but the music, and musical expression of this decade were on fire!

When the eighties had its run, the walls came crumbling down to usher in the 1990’s. Two of the biggest explosions in rock history…Nirvana and Guns and Roses! That’s not to say there weren’t other great acts to be had- but these are the most notable. There was Soundgarden, Pearl Jam; Alice in Chains, STP, the list goes on. It seems all the glitz and glamour Duran Duran threw at us pissed enough musicians off that they took-to stripping it all down, throwing back on their t-shirts and jeans (torn and smelly of course), turned their amps up to 11 and blew the whole thing to Smithereens (Yes, I know, I snuck that band in on ya!).

Note: I could’ve kept writing and probably will continue this thought at a later date, I’m sure I missed a few groups and possibly left out some of your favorites, but for the purposes of this blog post, and as not to bore you all to death, I will end it here. Ciao for now!